Getting on the Map

Who would have guessed back in 2007 that the Etrian Odyssey series would become such a sizable one? If Persona Q‘s mechanics make it an honorary member of this family, then Etrian Odyssey 2 Untold: The Fafnir Knight is the eighth entry, also counting Etrian Mystery Dungeon. There are no great surprises in store with Etrian Untold 2 either, meaning that those who staunchly refuse to partake of the series can keep right on doing so. I found more of the enjoyable dungeon exploration that the series is known for, along with the entertaining character interactions of the first Etrian Untold, which meant I had a pretty good time throughout.

Etrian Untold 2 begins with an unnamed protagonist and his archer friend Flavio journeying to take part in their first mission in the nation of Lagaard. The task is to escort a young woman named Arianna through a dungeon so that she may perform a once-in-a-century ritual, but doing this proves rather more complicated than expected when the protagonist is afflicted with a strange ailment that twists his right arm into something monstrously powerful. The trio is shortly joined by the poorly-socialized mage Chloe and her protector friend Bertrand, forming a quintet to explore the Lagaardian labyrinth’s many levels and eventually complete the ritual.

The story of Etrian Untold 2 is not strikingly original, but is nevertheless well-told. While most of the events that occur are not particularly shocking they remain interesting, not least thanks to the effective characterizations of the leads. Like the first Etrian Untold, these people manage to be more captivating than the clichés they could be confused with at a glance. Their interactions while exploring the labyrinth and in town are enjoyable, even when nothing of great import is delivered by the exchange. Like the first Etrian Untold, this one also comes with the ability to play minus the defined cast, which shrinks the plot points down considerably.

Etrian Odyssey games come with multiple levels of dungeon to explore and map on the bottom screen, while random foes pelt the party with aggressions. Etrian Untold 2, as befits a remake of the second game, fits this broad template quite well. Lagaard’s numerous dungeon levels each sport something new to keep the player attentive, and looking around will uncover frequent spots where something unique happens. Having plentiful options at hand for mapping the dungeon remains an addictive activity, and in this iteration certain icons change according to their status, lending a further welcome assist to the considerable job that is good cartography. 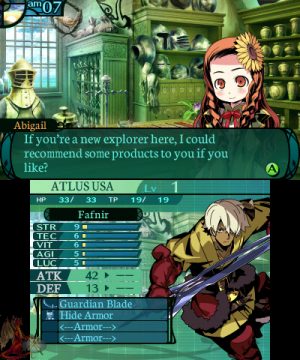 Combat follows the general rules of turn-based dungeon crawlers from over the years, though the Etrian series has refined the proceedings quite well. The major new wrinkle of this title is something called Force Boost, a power-up used individually by party members which lasts for a few turns and dramatically affects battle performance. Its essence is not that different from plenty of other games, but it can have a major impact if used in a dangerous fight. Otherwise the options available are a wide assortment of abilities to be employed against an even more varied group of adversaries — standard stuff, but effectively done.

The Etrian series continues its insertion of FOEs into the dungeons, visible nasties that employ multiple means of moving around the map and getting in the player’s way. Not all are immediately hostile, but the methods by which these creatures get in the way are quite varied. Some can fly, others use area attacks on the map, still others can cover larger stretches of territory at a time than the party, and all are dangerous if carelessly confronted. Etrian Untold 2‘s menagerie of FOEs is a large one, and each floor provides some new wrinkle to consider when dealing with them.

A function carried over from the first Etrian Untold is Grimoire stones, generated randomly during combat with new skills that come from both the party and enemies. These are a nice idea in theory to supplement character abilities, since they allow a customization option to buttress the available ability trees that doesn’t require more skill points to unlock. Grimoires can indeed supply nice things that are very helpful, but the sheer quantity of them being generated means that sifting through all the options will take a long time. It is possible to accumulate several hundred Grimoires that must be pored over for each available slot on a party member, and many of the stones copy an identical skill to one already created. This system needs a bit more refinement to become the ideal method of generating extra techniques.

Like other Etrian games, this one finds the party collecting pieces of monsters along with sundry desirable products of nature while exploring the labyrinth. This variegated lot is hauled back to town and sold to the eager shopkeeper, with the result of new materials usually being a fresh piece of equipment to purchase. Just like earlier games in the series though, this one restricts the inventory to sixty total items, which includes healing supplies and other usable goodies. There will be times when the party has no other reason to head back except running out of inventory space, and it remains as inconvenient as in the rest of the series.

Something new in Etrian Untold 2 is food ingredients that aren’t sold, but go into a restaurant’s supplies. This restaurant features numerous recipes that must have the proper ingredients applied to be usable, though the clues are generally clear enough not to be a problem if the materials are present, and food provides a number of helpful effects upon entering the dungeon. A surprising amount of time can be spent at this restaurant, including a city-building function of sorts that allows recipes to be marketed to a fickle populace in the search for extra money. While not exactly unpleasant since the character interactions with the proprietor of the restaurant are often amusing, the rewards to be gleaned from going through all the time and effort possible here don’t really feel worth the while. 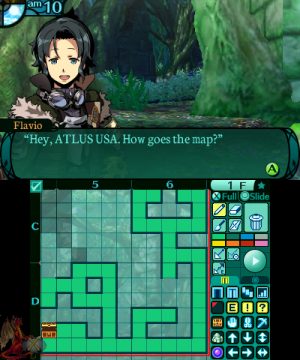 Seems to be pointing to the greater LA area for some reason!

Three difficulty options are available upon starting the game, and the challenge can be altered any time the player is in town. At the lowest level proceeding through the game is a breeze, while the highest will demand strategic thought upon almost every encounter. Even blasting through the game will likely take around forty hours, while investigating every quest available and all the extra dungeon locations can push that time much higher.

The first dungeon exploration reveals a number of recycled enemy designs from earlier 3DS Etrian games, but plenty of new ones will be found while moving along. Relatively few palette swaps are used here, and they are found in locales that are distinct and interesting — the result is a visual experience that feels fresh even though the graphical quality is on par with the previous entries. As for the audio, Yuzo Koshiro’s highly effective score from the original game has been reorchestrated for this title, and the tunes in either version are unequivocally worth hearing. The voice acting is mostly strong, even if its quantity is sometimes too limited to let more than a few canned bits come out from the supporting cast.

Etrian Untold 2 delivers the same kind of experience the first Etrian Untold did, but with further refinement. Anyone who enjoyed that title is likely to have a fine time with this one too, and it offers a great deal of content for the dungeon crawling crowd to devour while pleasing players who like a little narrative to go along with exploration. While this isn’t the greatest possible dungeon crawler that can be constructed, it’s more than good enough to deserve investigation by anyone who has at all liked what came before in this series.