Ambition is a common thread present throughout Midgar Studio’s Edge of Eternity that is evident the moment the stunning open world hits the screen. It takes ambition for a small studio to tackle making a modern JRPG that takes on the classic formula from the 1990s and to create such a large 3D world. For a moment, as the JRPG nostalgia kicked in, Edge of Eternity seemed like it could pull it off, but it doesn’t quite come together into a memorable experience.

Edge of Eternity begins as on-tour soldier Daryon receives a message from his sister Selene who gives him the news of his mother catching a deadly disease called the Corrosion. Selene pleads for her brother to desert the military and come home to their mother, but before Daryon can decide, his squad is attacked by Archelites, an extraterrestrial enemy force that has invaded the planet Heyron. From here, the player is thrown into an hour-long combat tutorial that doesn’t provide a great first impression. Instead of showing off its beautiful open world, Edge of Eternity provides a series of cutscenes to build it’s story in the prologue. Throughout the game, the cutscenes are visually overshadowed by the scenery and it has an impact on the effectiveness of them. It’s a shame Midgar Studio starts in the least visually interesting environment in a passive manner.

When Daryon and Selene manage to set out on their journey to find a cure for the Corrosion, the visually stunning open world of Heryon becomes an immediate draw. There are many moments where the player will find themselves stopping to take a look at the beautifully detailed sights. It is not perfect, as enemy and character animations on the map are a bit janky, but it’s vibrant world is filled with plenty of useful treasures to find. It’s fun to explore, with plenty of chests, consumables, armor, and weapons that help upgrade the team. Crafting ingredients found around the world are essential for upgrading weapons and even consumables, like potions. Travel is made more enjoyable by a big furry rideable feline called a Nekaroo, while save points let players teleport to other save points previously visited.

Another element that makes exploration enjoyable is the beautiful soundtrack that accompanies it. It’s the combination of the gorgeous scenery and soundtrack that most successfully evokes nostalgia for the classic JRPGs the game is so clearly inspired by. The one drawback, however, is the less impressive cut scenes. The voice-acting in cut scenes is fine, with only Daryon being one of the few lackluster performances, but it’s the character models that just don’t hold a candle to the environments. Character models have very stiff animations and it really starts to show the seams once the game gives players a closer look. It makes the visuals a double-edged sword; the stunning world is an immediate draw, but the difference up close is jarring. 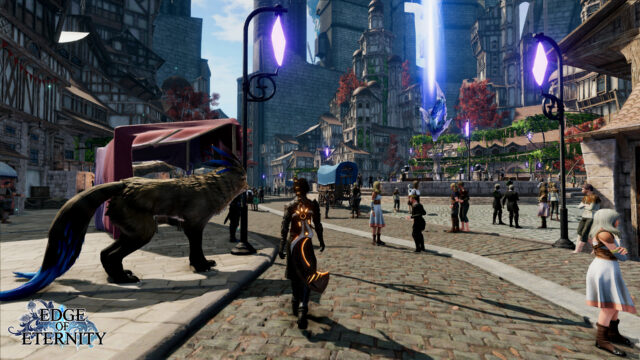 One of many gorgeous settings of Heryon

While the world looks interesting and offers players plenty to do, the story is very hollow for most of the game. It’s a simple enough premise as Daryon and Selene start their journey looking for a cure for the Corrosion to save their dying mother, but it takes multiple chapters for any significant developments to take place. The main story objectives drag along, and the lack of plot advancement becomes frustrating enough that players will eschew battles and quests just to try to get to an interesting story beat. When the story does advance, Edge of Eternity wraps itself in its classic JRPG inspirations so tightly that genre fans will have no trouble guessing where it goes. The lack of departure from the standard formula and its slow progression hamper the story enough that many players will not gain any excitement from or attachment to anything that is happening.

While Edge of Eternity has mature themes dealing with war and death, there is never significant exploration of these themes. One narrative theme pertaining to Daryon and Selene is constantly explored throughout, and even wraps up nicely, but it’s the constant misses with other characters that are hard to ignore, and one party member in particular is woefully underdeveloped. While the pacing eventually picks up in the final two chapters, the damage is already done and it’s not nearly enough to save the very slow start that carries on without many memorable moments.

Thankfully, the combat system is far more satisfying. Edge of Eternity blends together an Active Time Battle-esque combat system with a hexagonal-gridded battlefield. Once a character’s action gauge fills, all other gauges pause. Available actions include a normal attack, offensive spells and skills, and support abilities. Getting behind enemies adds extra damage as does exploiting elemental weaknesses. Combat is initiated by engaging enemies on the map and players can utilize a slashing mechanic to gain an advantage at the start of the battle. Each character in the party has an established roles that it’s hard to deviate from. However, adding gemstones to weapons lets players boost different combat stats and adds different skills. Leveling up weapons opens up more slots for gemstones to become even more powerful and give the player many skills to use in battle. It’s an easy to grasp combat system that has players continually thinking up new strategies as enemies get tougher.

The combat really shines during boss battles. These often require players to gain an advantage by using certain battle mechanics or the environment strategically. For example, in grass fields, fire bombs can be tossed on an enemy to add residual fire damage. Boss battles provide a good challenge that requires thoughtful planning to claim victory and are very rewarding. One particular encounter in chapter five may seem impossible after initial attempts, but experimentation with different strategies is the key to ultimately claim victory. However, in keeping with the 1990s JRPG inspiring the game, Edge of Eternity‘s final boss battle is very long and difficult compared to the rest of the game. 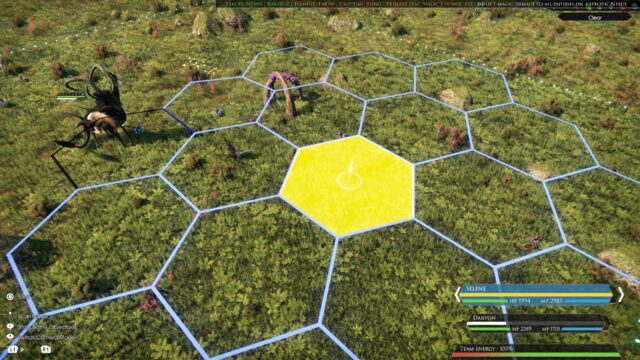 The hexagonal battlefield is referred to in-game as the nexus grid.

Battles are the first area that witnessed some minor technical problems with Edge of Eternity. The battle grid is placed in the same area as where players enter combat. It’s a nice touch, but can sometimes lead to characters having to awkwardly move around objects on the map and can get stuck long enough that they simply have to pop into place. The audio balance is uneven, as sound effects are often not heard at all and there was one instance where a character’s voice over kept cutting out in a particular scene. While there aren’t any game breaking problems, and nothing crashes the game, minor issues are noticeable throughout.

It’s hard not to be impressed with some of the things Midgar Studio achieved with Edge of Eternity. The stunning environments and soundtrack will greatly satisfy any JRPG fan. Combined with its engaging combat system, this should have been enough to make it a well held together experience, but the story’s lack of focus causes things to fall apart. The poor pacing, particularly at the beginning of the game, results in enough pointless running around enough so that it’s easy to look past some of the best features of the game. Edge of Eternity will scratch the itch of those looking for a classic JRPG with a modern touch, but past that, it doesn’t provide enough to create a truly great experience.