Dancing Dragon Games earned a reputation as a solid RPG Maker-based developer following its Deadly Sin duology and Skyborn. Its fourth title, Echoes of Aetheria, keeps that reputation up with a fun, albeit unspectacular, experience. It’s debatable how well the title stands up next to higher profile releases, but it offers an enjoyable way to wile away some hours.

It’s a little hard to buy into opening of the game’s self-characterization as ‘humble.’ A wedding ostensibly to bring peace to two large nations is interrupted by the kidnapping of the bride. Lucian, the adopted brother of the groom and the only official in a position to do anything against the kidnapper’s tactics, rushes to chase down the criminals. Another incident involving a train intercedes, which requires him to team up with a street urchin-turned-indebted-mechanic named Ingrid. What follows is a twisting journey through numerous betrayals, shadowy schemes, and, naturally, the sort of conflict that the wedding was intended to stop in the first place.

The good thing about the story is that it moves quickly. Twists come pretty thick and fast and it means the game never gets too bogged down. This speed unfortunately comes at the cost of lost subtlety and setups for the twists. Things can appear a bit disjointed, though it’s somewhat smoothed over by the existence of a substantial lore glossary that helps show some decent world-building. The disjointedness shows up more in character behaviour, which can seem inconsistent at times — most notably with the protagonist Lucian — however, the main cast on the whole is an engaging and likeable bunch, particularly Ingrid. It’s not an especially memorable story and treads a lot of traditional tropes, but it does the job and keeps things interesting throughout. 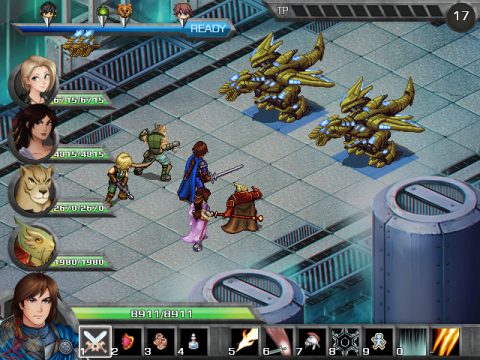 Echoes of Aetheria gets away from the basic one-turn-for-all system that forms the basis of many RPG Maker titles. Individual turns instead are visible on a bar at the top of the screen, with faster characters moving along the bar more quickly. Certain skills have a build-up timer and can be interrupted, though this crops up rarely as the skills that require this are rarely more useful than immediate ones and enemies aren’t often geared towards them either. Position forms a big part of the battle system, with each side’s combatants placed on a five-by-three grid. Characters standing behind others are protected by them, though various skills will bypass this protection.

The biggest problem with combat is that it becomes very repetitive towards the end of the game. This is primarily due to the steadily increasing length of the dungeons combined with the small number of enemy configurations for each area that does not seem to commensurately increase. Certain boss fights have neat mechanics that necessitate a change in tactics, which is appreciated and helps to make these distinct from the regular battles in the game. The difficulty balance is generally good, and little or no grinding will be required. Players will usually have to put some tactics to use in all fights, and there is a welcome option in place to choose the difficulty ahead of each individual dungeon.

Echoes of Aetheria‘s dungeons are generally well designed. There’s some enjoyable classic JRPG pathfinding exploration to be had, with a good number of treasure chests or XP boosts to help encourage it. The game also makes effective use of various switch and teleportation-based puzzles. It can get tiresome in the final dungeons as layouts arrive at their largest and most complex, a problem exacerbated by the aforementioned lack of enemy variation. Fortunately, enemies do not respawn to cause continued annoyance, but there are still enough dotted around for it to be a problem. 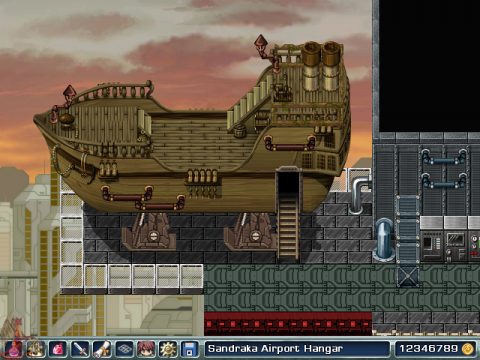 Airships are sensibly based on the idea that flying through the air is exactly like floating on water.

Progression in Echoes of Atheria follows traditional levelling up and equipment systems. Where the game stands out somewhat is in a pretty robust crafting system. This allows players to craft their own weapons and armour with effects and bonuses that will not be seen on store-bought or found goods. Players also get some customisation in the assignment and upgrade of character skills. Characters unlock more active and passive skills as they level-up, with players able to assign up to seven combat skills — many of which make use of the shared TP gauge and have significant cooldowns — that can be linearly upgraded up to four times and three passive skills for each character. There’s nothing overly deep here, but what is on offer is appreciated to help break things up and give players the opportunity to develop different strategies.

Visuals are around the level one might expect from an RPG Maker title, though a good amount of effort has gone into asset placement to create good dungeon designs and sensible locales. The combat visuals work well too, but a little more effort given toward creating a distinct and consistent colour palette and overall style would have been appreciated. There’s just not much visually where the game sets itself apart and the lack of consistency between locations lends a bit more to some of the disconnects in the plot. The soundtrack is a solid effort, evoking the classic feel of 16-bit JRPGs nicely, but doesn’t do all that much to stand out from the crowd.

At the risk of damning it with faint praise, Echoes of Aetheria is certainly amongst the strongest RPG Maker titles I’ve played. While the game may not compare too favourably with entries from more storied full-time developers, the fifteen hour playthrough was on the whole enjoyable, offering a nice sense of progress through its fast-paced plot and solid gameplay. Those looking to play a title reminiscent of classic JRPGs could certainly do a lot worse.