Many of you might recall how smitten I was with Dragon Quest Heroes: The World Tree’s Woe and the Blight Below when it released back in 2015. The marriage of Dragon Quest to Musou-style gameplay was a wonderfully bizarre combination that worked surprisingly well. It would seem Square Enix is attempting to capitalize on this success with a sequel, Dragon Quest Heroes II: The Twin Kings and the Prophecy’s End. Although it is a solid game, it does nothing to improve on its predecessor.

Players take on the role of a hero and heroine who are knights-in-training at the Harban Knights Academy. The Seven Realms have been at peace for over a hundred years, until all of a sudden, monsters from the Dunisian Army begin to invade Harba. Thus begins a large scale war amongst the Seven Realms, and it is up to our heroes to restore order to these kingdoms. Along the way, the protagonists meet popular characters from the Dragon Quest series, such as Jessica and Angelo from VIII, Terry and Carver from Dragon Quest VI, and other helpful companions.

The story itself is fairly straightforward, lacking anything new for the Dragon Quest franchise. It’s very much a typical “chosen one” story with not a lot going for it. At times the story plods along, almost painfully slow, with a lot of predictability, and there isn’t much there of interest. While the fanservice aspect of having all these Dragon Quest characters coming together is fine, Heroes II uses the same gimmicks from the first game, making their appearances feel so uninspiring, and adding to the predictability. Where the game shines is in its localization, which continues to be chock-full of humour and fun. There are some fabulous moments where the writing does a good job of keeping the player abreast of what is happening: it’s just a shame that the story doesn’t deliver the same punch that the localization does. 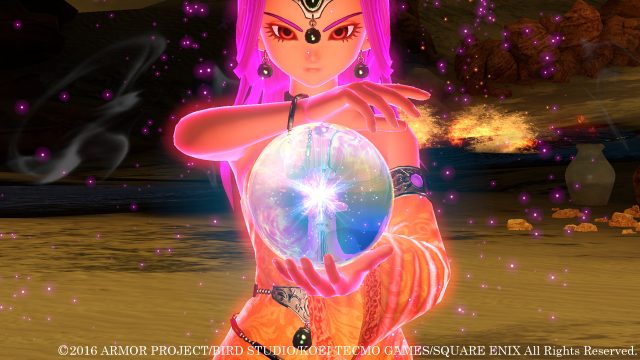 Combat is the main aspect of Dragon Quest Heroes II, as players will traverse through various maps, completing objectives and beating the crap out of foes that stand in their way. Battles are nearly identical to the first game wherein the player chooses four heroes that they can swap mid-battle to mow down Mawkeepers in order to stop enemy hordes from overtaking the maps. By murdering foes, players can build ridiculous combos to build their high-tension gauge to unleash their deadly coup de grâces — a high-powered ability that can obliterate large waves of enemies.

When defeating monsters, players can pick up Monster Medals that can be used in battle to help support the main party. One new addition to this are the Substitute Monsters, wherein the player character will transform into a monster for a limited period of time. While combat is still fast and frantic, the amount of battles players face does add to the game’s padding, to the point where it can drag on. There are too many instances where the game adds more and more battles even though it’s trying to convey to that player that it’s near the conclusion. What felt very fresh in the first Dragon Quest Heroes is sadly no longer the case in this sequel as the amount of added battles and padding just drags the experience along without adding anything meaningful. 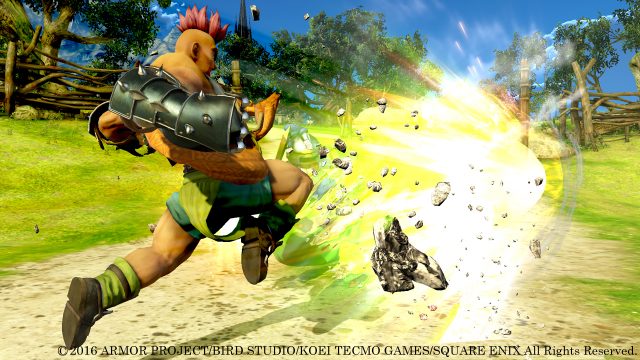 While battles are constantly plentiful, Dragon Quest Heroes II has made some new changes in regards to exploration. Previously, players had a hub location and then would move from location to location to progress the story, but Heroes II changes the formula by offering Wild Zones — open areas for the player to roam. In these Wild Zones players will find crafting items, quests, and tons of monsters to bash. This is a nice change, though it doesn’t add anything extraordinary given that the story missions still play out moving from one battle to the next without much of a break. There is also a weather system that changes as players move around in the Wild Zones, sometimes adding status effects on the player. It’s a welcomed change that helps make exploration interesting, though the status effect nonsense could have been done without.

One aspect of Dragon Quest Heroes II that is solid is its visuals. The game has gorgeous graphics that pop on the screen. It’s colourful, bright, and Akira Toriyama’s character designs are well-rendered and highlighted throughout the game. Since Musou games can get chaotic, there are the odd blemishes in the form of clipping and some framerate slowdown. While these issues do exist, it doesn’t take away from the overall visual impact. The soundtrack is equally enjoying, showcasing new tunes and classic Dragon Quest fanfare. It’s catchy, hummable and many of the tracks, such as theme song for Accordia, can easily stick in one’s mind for hours on end. The voicework is fun and suits the localization wonderfully, though certain voices such as Alena’s Russian accent are cringe-worthy to say the least.

While I loved Dragon Quest Heroes back in 2015, Dragon Quest Heroes II is a very safe sequel that doesn’t add much to a stale formula. While this is a good sequel, it definitely has its moments where it could have ended much earlier than it did. Musou and Dragon Quest enthusiasts, of which I am both, will be easily sold on this game. Still, part of me feels that if this game had been a tad shorter and more cohesive, I would have loved it as much as the first.