Dragonlords Are Never to Be Trusted

In an age long past, a hero following in the footsteps of Erdrick set off from Tantegel Castle to retrieve the kidnapped princess and eventually take on the Dragonlord. But upon meeting the Dragonlord, the hero was presented with a choice to share in ruling the world with him. Unlike many games of its era that incessantly repeat questions when the hero makes the wrong choice, the original Dragon Warrior allows this would-be hero to eagerly accept the Dragonlord’s offer, thus setting into motion the events that lead to Dragon Quest Builders. To no one’s surprise, the Dragonlord’s offer turns out to be a bad deal, and although we’re not told exactly how, the world is plunged into darkness. Humans lose their ability to create, their towns and cities fall to ruin, and monsters rule the land.

This sets the stage for the game’s protagonist to save this tainted world. But, as the goddess Rubiss makes sure to repeatedly remind the player, “You are not a hero.” Instead, the player is the legendary Builder, the only living human with the power of creation — the power to build. Aside from the interesting premise the story in Dragon Quest Builders is nothing to write home about. The main story, saving the world from the Dragonlord, is simple, and while there are a few interesting cutscenes and a bit of mystery surrounding the protagonist, there is very little plot beyond that. Each of the game’s four chapters takes place in a new region and features a subplot that is also very straightforward and minimalist. The only really notable aspect of the plot and writing is the NPC dialogue. A number of characters feature humorous lines and the protagonist’s willful lack of patience and interest in Rubiss’ purposely cliché dialogue will provoke a few chuckles.

As the legendary Builder, the goal of the game is to build up a series of towns in each of the different regions. A town is first established by planting a banner at a predetermined location. A friendly NPC gives the player quests to direct town building, material collection, and discovery of new recipes. As the tasks are completed, more NPCs join the town, each with a series of quests. New areas within each region progressively unlock, giving access to more powerful materials and recipes as well as unlocking new quests. As a town grows, enemies launch increasingly more difficult and more frequent attacks. Eventually the region’s main boss assaults the town, typically just after the weapon necessary for its defeat has been constructed. After the boss is defeated, the game progresses to the next chapter and the Builder loses most of his recipes and items and has to start the process all over again. In this regard, even though the regions are different, they play out very much the same and as a result can make the game feel somewhat repetitive. 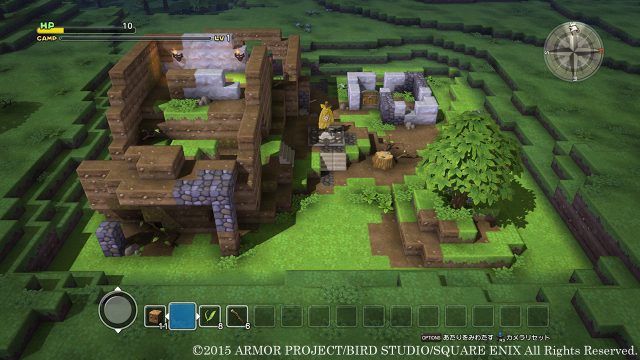 Building gameplay works very much like Minecraft and similar games. The world is made of blocks and other objects that can be broken down using a hammer and the resulting materials collected. Some of these items can be placed as blocks to build structures, while others can be used to craft weapons, armor, tools, or other game objects. The building workflow includes a number of features to streamline the process and make it controller-friendly, such as the ability to select a block’s vertical position or to repeat placement of blocks by holding down a button and moving the player. Unfortunately, block rotation cannot be set and depends solely on the direction the player is facing. This sometimes necessitates temporarily destroying existing structures or constructing elaborate scaffolding to enable a player to approach a location from the desired angle. While the boundaries for each town area are a bit on the tight and cozy side, a limitless number of town layouts are still possible because of the ability to build vertically. Although players can spend as much time as they like building their towns, the game’s main quest and NPC side quests provide both direction and purpose to building, making for a more engaging, if also more constrained experience than many other block building games. Overall there is a great balance of material collection, building, and directed progression to keep the game varied and interesting. Dragon Quest Builders truly shines in its core mechanic, enabling boundless creativity while simultaneously providing targeted progression. The game also features a free-building mode for those who just want to build, and completing challenges in the story mode unlocks new items in this mode.

Although building is a primary gameplay system, in a world ruled by monsters, combat is just as common. Dragon Quest Builders is a very simple action RPG in this regard, featuring just two weapon types, a few sets of simple armor, and a handful of accessories. The limited number of combat actions include a fast attack, a charged attack, and using a few different items. Damage from touching enemies coupled with the player’s exceptionally short attack range can also lead to frustration. The camera can be problematic when in tight quarters, sometimes failing to zoom in properly when objects block the player from view, leading to difficulty seeing the player. The combat works to provide a necessary break from collecting materials and building structures, but its simplistic nature coupled with the high density of common enemies can at times feel tedious. Unlike fights with common enemies, boss battles are well-designed and feature unique and interesting mechanics for the player to use. Boss battles focus on defending the town from the boss’s onslaught using items specifically crafted in preparation for the fight. The player must figure out how to use these tools in order to avoid damage, deal damage to the boss, and keep the town safe from destruction. Balancing these objectives makes for a highly enjoyable and challenging experience. 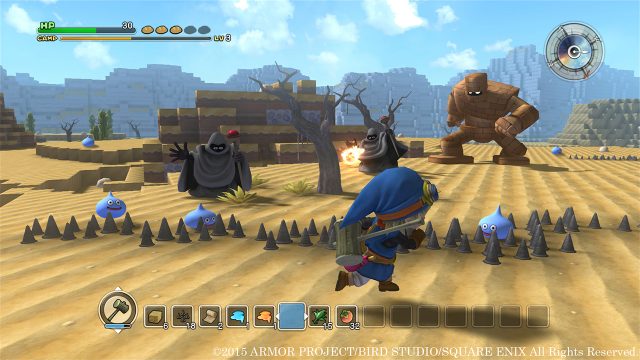 So many enemies. So few abilities to keep fights interesting.

The graphics in Dragon Quest Builders, while in some ways charming, leave much to be desired. The blocky nature of the block building genre is oddly reminiscent of the pixel graphics in the original Dragon Warrior game and therefore works well to impart a classic feel to the modern game. But textures, character models, and other game objects that do not come in block form are woefully lacking in detail and betray the game’s creation as a title also aimed at the PlayStation 3 and PlayStation Vita. In spite of this, the environment designs are visually interesting and artistically consistent, partly making up for the lack of technical quality.

Dragon Quest Builders features remastered music from the first Dragon Warrior game and other early entries in the series. Unlike soundtracks in modern games that are often more subtle, the tracks in this game have a strong presence and character, and will elicit a potent sense of nostalgia in longtime fans. In case that’s not enough to bring back vivid childhood memories, the game also includes 8-bit versions of the tracks that can be toggled by building a special item. Overall, the modernized version of the dated composition style feels consistent with a game designed in classic style but presented on modern hardware.

A number of RPGs have previously attempted to incorporate town-building elements, but due to the significant time investment required by most RPGs, such systems have offered limited player options. On the other side of the spectrum, many building games offer players creative sandboxes, but can quickly get stale without focused goals. Dragon Quest Builders manages to strike a great balance, combining a streamlined Minecraft-inspired building system with a goal-directed minimalist RPG series. The simple nature of each can lack depth when compared to standalone games in the corresponding genre, but as a combination it works, enabling players to delve into each system without overloading them. The game’s somewhat repetitive nature, outdated graphics, and limited combat do somewhat detract, but with the added dash of nostalgia and a hefty dose of humorous charm, Square Enix has the beginnings of a successful formula on its hands with Dragon Quest Builders.