Have I Been Here in a Previous Life?

Released in 2003, the original Disgaea for the PlayStation 2 was received with open arms by RPGamers and critics alike. It boasted a strategic, turn based combat model with highly unusual methods for levelling up characters, weapons, armor and statistics, as well as a quirky, humorous, anime style story. Nippon Ichi quickly took advantage of that success, releasing a couple of direct sequels and a few spin-offs. Now, six years later, Disgaea 2: Dark Hero Days makes its way onto the PSP.

In this story, the main hero, Adell, is human. In fact, he is the only human around. All of the other humans were turned into demons by a curse from Zenon, a dark overlord. Adell promised to return his family and town back by doing the only thing a young lad with fists of fury can do — beat the overlord himself. His mother agrees to summon up the dark overlord using a ritual requiring the life force of some volunteers (after all, that’s what family is for!). Instead of the dark overlord, the ritual calls up the daughter of the Dark Lord, Rozalin. Despite their instant distaste for one another, Adell and Rozalin set aside their enmity, at least on the surface level, in order to find Zenon.

In typical fashion, most of the story is told through cut scenes in between levels. There is very little actual animation, with still shots of characters giving some indication of what emotion each character is feeling. Rather, the bulk of the story is conveyed through the voice acting that takes place during these sequences. The story is generally entertaining if somewhat predictable. Adell and Rozalin are stereotypical and lack the personality found in the supporting cast. The humor for which the series is known is still present, however, it is a bit watered down by the seriousness of the main plotline and the cliché main character. 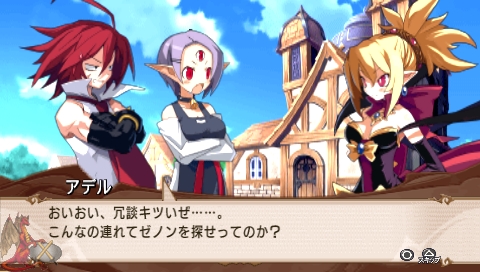 I’d rather hang out with the mom with three eyes.

This is addressed somewhat in the bonus story line included in this version of the game. Starring Axel, the self-proclaimed Dark Hero, these four extra chapters walk the player through some of his history. With a zany cast of characters and an outrageous story, one might feel that this should have been the main offering. These chapters are also a stiffer challenge, due to the fact that none of the main heroes from the first story carry over. If the player did not develop a solid group of hand made characters, they could quickly find themselves outnumbered and overpowered early on.

The gameplay will be instantly recognizable to any RPGamer who has experienced any of the other Disgaea games. This is a turn based tactical RPG at heart. The vast majority of game time will be spent in battle. The player is able to move and attack with the whole party at once (up to ten characters) during each turn. This enables party members to quickly gang up and overpower even strong enemies. The reverse also holds true, as enemies will not hesitate to combine their attacks to knock out multiple party members in a single turn. Disgaea 2: Dark Hero Days also features a number of unconventional attacks and moves, such as throwing enemies and allies around the board. Furthermore, geo blocks make combat even more interesting by adding buffs and disadvantages to foes and allies alike. As a result of these various challenges and conditions, and the wide array of choices a player can make, no two battles play out the same way.

The multitude of unconventional gameplay mechanics does not end with combat, however. Players can take their team to travel to random dungeons inside of any weapon or armor. By going further and deeper into the dungeon, that item will gain levels, increasing its power. Players can also be served subpoenas for felony offenses including reaching a certain level or having a high stat. Traveling inside of them forces the player through a number of random levels, similar to items. Once at the set level, one of the party members is tried and may earn a conviction. Having multiple felonies may earn the character benefits such as experience bonuses and discounts at the store. 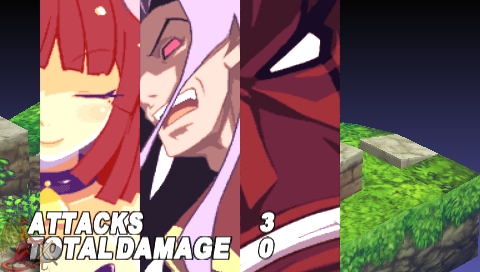 Who else wants to join the party?

There is so much more to both the battle mechanics and customization options that even a simple description of all of them would be outside the scope of a review. Those familiar with the other games in the series will find the staple mechanics from the first game along with some options from the third in the series, such as the ability for monsters to ‘magicchange’ and automatically throw a monster without using a turn. (Note: most of these mechanics become unlocked after completing the main campaign first). Simply put, Disgaea 2: Dark Hero Days is a deep game for RPGamers who enjoy spending time building a party up through customization and repeated battles.

The graphics are generally a mixed bag. For the most part, battles look like an early PlayStation 2 game. Combat boards are blocky, and characters are 2-D pixelated sprites. While this is somewhat distracting even when shrunk to the PSP, at least the resolution is set in the proper wide-screen aspect ratio. Story scenes feature hand drawn anime characters and painted backgrounds that look very nice, although they are static. The music in the game is entertaining at first, but becomes repetitive after a while. One of the vendors sells music tracks allowing the gamer to set a desired tune in item world, which does help during longer runs. Most of the lines in the story are voice acted rather nicely. Each character speaks with passion and personality.

Despite the incredible size and scope of it, this is a game that is fun to play in short spurts. The menus are easy to navigate, and the text is easy to read. A number of options makes it easy to sort characters and items quickly, and the shop has options that allow the gamer to see exactly how a purchase will benefit a character before buying. In combat, those options allowing for animations to be skipped have been included to make level grinding that much faster. The controls also work just fine with the small exception of the camera. It would have been nice to have more ways to tilt the camera during battle.

Those who played and did not like the series, or who are bored with it, will find little here to change their minds. The Disgaea brand of near limitless levelling (and grinding to go with it), has always been an acquired taste, and the formula is starting to wear thin. RPGamers new to the series may be better suited playing the first game for its stronger story and simpler mechanics. Those who enjoy Nippon Ichi’s weird brand of SRPG games are in for a treat. The graphics in the series continue to show their age, and the main story lacks some of the spark of the others. However, the gameplay elements that draw in power-gamers are not only intact, but enhanced. With bonus content, new optional game mechanics, characters, and more, Disgaea 2: Dark Hero Days is better than its original PS2 release, and deeper than many of the RPGs on the PSP today, including Disgaea: Afternoon of Darkness. Not to mention, there’s something fun about having a really large, really deep game on a handheld.