Never Too Late to Be Forgotten

“It’s like Godzilla meets Lord of the Rings!” “It’s like Batman meets The Jungle Book!” Describing new works by comparing them to familiar, much-loved concepts is a time-honored critic’s trick for convincing people to step outside of their comfort zones. Fortress of Doors’/Level Up Labs’ Defender’s Quest: Valley of the Forgotten draws on this technique in its Steam blurb, which asks readers to think of it like “Final Fantasy Tactics meets Tower Defense.” The Final Fantasy Tactics connection feels like a stretch, but not an incredible one. The RPG elements in Defender’s Quest aren’t just pasted on. They’re swirled both narratively and mechanically into the tower defense mayhem that forms the core of the combat system. Traditional fantasy RPGs and lighthearted tower defense games may initially sound like an unlikely combination, but like salt and caramel, they complement each other in surprising ways.

At first glance, Defender’s Quest appears to be a silly little indie game with big dreams. The characters are bright and cartoony, and their dialogue is marked with sass. Their battle sprites display whimsical touches, like the ranger who spins her bow before firing. One of the promotional spellbooks Azra can equip, the Book of Face, introduces the Internet’s beloved Trollface to the otherwise sword-and-sorcery setting. Focusing on the one-liners would be simple, as they are good. However, the core plot has heft: it would make a good Dungeons and Dragons campaign or fantasy adventure novel. Royal librarian Azra must survive in a quarantine pit the size of a small nation, while she’s pursued by mysterious figures. It features conspiracy, betrayal, and explosions. Careful gamers shouldn’t be surprised a USDA-certified English major wrote the script. The wacky comedy and childish in-fighting among Azra’s companions allows the team to quickly bond. These light-hearted intra-party friendships and feuds add personal stakes to the more pervasive dangers of the pit. The story is delivered in slideshow style before every town and battle, tying the narrative neatly to combat. 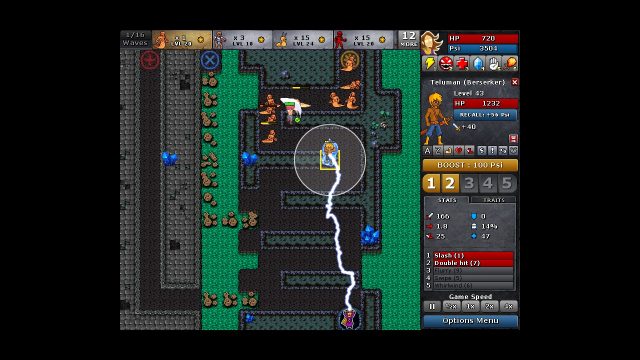 There’s a lot to take in, but it’s introduced gradually.

Combat is handled like a tower defense game. Enemies travel in waves from spawn points. As they walk into the attack range of stationary heroes, they suffer the effects of the heroes’ attacks. The heroes are unable to move from where they’re summoned, as they’re doing combat on a spiritual plane where bodies just get in the way. The cornerstone of battle strategy comes from placing the six types of heroes in the appropriate location. After recruiting story characters (such as Slak, the madcap, murderous berserker), faceless extras of the same type become hirable. If that’s all there was to combat, it would be a delightful diversion. However, each character gains experience points, which can be spent to learn new combat skills or boost existing ones. Once learned, most of these skills can’t be used immediately. Characters must be boosted in battle, which draws from the same Psi pool Astra uses to summon allies and cast spells of her own. It can be a challenging balancing act to position the proper allies, keep them boosted, reposition troops to respond to new threats, and maintain wide scale battlefield control with Azra’s spells. Thankfully, slowing the game’s speed (and pausing it altogether) are simple options. The keyboard commands are simple to learn and encourage faster play, but nothing’s wrong with the mouse either.

With all the moving parts that go into battle, the multiple levels of accessibility are a nice touch. Each character has nine different attack modes including “attack the strongest enemy” and “attack the enemy with least immunity to status effects.” Understanding the interplay between these attack modes isn’t necessary for most of the core game, but integral to completing the optional levels. Furthermore, failure isn’t necessarily punished. The default settings infer experience and money penalties for losing battles, but these can be changed based on individual preference. Redistributing skill points to explore different character builds costs money, but not a fortune. The steepest cost is the time it takes to click through all the advancements. The largest concession to the casual-vs.-hardcore debate is the option to increase experience points. Players who care more for the story and the thrill of rapid advancement can run with it. Players who want their hardcore bragging rights can lift their noses at the low-hanging fruit. True challenge-jockeys can set their sights on the more exclusive achievements, many of which are challenging even with gushing wells of experience points. 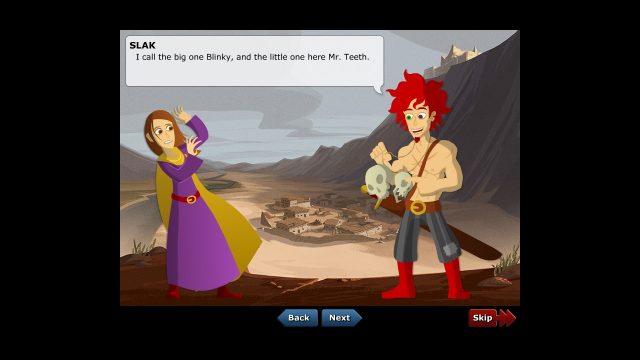 Collecting skulls can be an effective way to upgrade your equipment… and get uninvited from parties.

Defender’s Quest is a short game, but provides plenty of options to extend the experience. Completing every level at the highest difficulty takes about twenty hours; increasing the experience and money levels in the options decreases the playtime. However, the New Game+ mode, which becomes available after completing the base game, adds considerable challenge. The core story stays the same, but combat’s modified with new enemy powers, new maps, and new bonus stages. The New Game+ also provides a delicious means of upgrading the magic items earned in the core game, unlocking unique modifiers for each relic. As enjoyable as these new features are, Azra’s journal is the best addition to the New Game+. After every major battle, Azra updates her journal with commentary on the story. In the process, she details her internal struggles and fleshes out the world. The extra character moments in Azra’s journal are enjoyable enough that their inclusion as bonus material seems strange. They’d serve the story better as part of its body rather than as bonus material.

In spite of all this praise, Defender’s Quest isn’t perfect. Despite the snap and crackle of the script, it features several glaring spelling and punctuation errors — especially in Azra’s journal. Purchasing equipment isn’t as interesting as other elements of character customization, but the numerical benefits encourage frequently clicking through upgrades. The music is initially encouraging, but loops quickly. Thankfully, it can be toggled independently of the sound effects, which provide texture and valuable combat cues. The final battle song is a notable exception. That beast should be blasted loud and proud.

Between its addictive gameplay and sliding difficulty scale, Defender’s Quest offers gamers a great deal for such a small investment of time. It probably won’t make a true believer out of anyone whose parents were killed by tower defense games, but it’s good at what it does: drawing people in and refusing to let them go until they’ve finished “just one more level.”