Since anything even slightly popular must become a trilogy, Dark Souls III is here to close out its series of tough-but-fair action RPGs. A somber finale of sorts, Dark Souls III is mostly a return to form after the several missteps that many felt were made by Dark Souls II. Seeing how the series is planning a transition, Dark Souls III had to give a proper sendoff. While it still feels a bit over-reliant on the nostalgia of the near-perfect original, it offers a fitting ending for fans and a fulfilling game in its own right.

This time the proceedings take the player to the Kingdom of Lothric, a land that is on the brink of apocalypse. As the Ashen One, an Unkindled soul, it is the player’s responsibility to prevent the coming event by uniting and sacrificing the Lords of Cinder, who previously had linked the bonfires at some point in the past. Without much more pretense, the journey begins in a more linear fashion than the other titles in the series.

On a micro level, Dark Souls III‘s encounter design is as strong as ever. Each stage feels rather separated but each features its own twisting geography with clever shortcuts and secret-laden maps that reward exploration and careful observation. Enemies will ambush, drakes will breathe fire, mimics will punish those with a penchant for treasure, and the sight of an unlit bonfire is a rare moment of peace in the tense storm. The explorative elements play out in a very familiar way, but for Dark Souls III this is a positive. The sheer joy that comes from the discovery of an illusory wall or hidden alcove that holds even just a random item is still a feeling most games cannot emulate with. 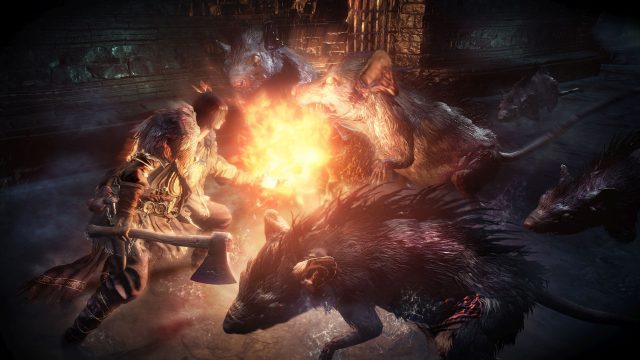 Don’t worry, there aren’t that many rats.

It’s when the game tries to connect itself between areas that it doesn’t quite live up to its promise. Oddly enough, it is series progenitor Dark Souls that may end up as the odd man out, as Dark Souls III is the most linear of the bunch, at least in the way the world is laid out. Stages are placed sequentially, barring a few offshoots, and never amount to a big moment when a discovery is made that two, seemingly unrelated, areas were actually connected the entire time. While other locations can be seen far away in the game’s awe-inducing landscapes, the transition to many of those places occurs in cutscenes, further isolating those areas. Teleporting is again available from the start, a necessary mechanical convenience that allows for some leeway in the tightness of the world. There is nothing wrong with this inherently, it’s just odd that a series that began with ingenious and flawless world design could fail to replicate that general feeling twice in a row.

One area the series has always been strong is combat, and it’s executed wonderfully in Dark Souls III. The looser aspects of Dark Souls II have been lost and in have come a few interesting additions. Every weapon and shield now has a listed skill that operates slightly differently for each weapon. While some of these are the simple parry moves they have always been, for other weapons an entirely new dimension is added: thrusting swords can enter a stance that gives them shield-breaking options, staves can offer temporary boosts to magic, clerical talismans can provide alternative healing options, etc. Most excitingly, boss weapons, earned from transposing their souls, often have unique attacks that mimic some of the moves once used against the player. The variety of available weapons and playstyles has also never been greater, with dozens of different weapons and fifteen different infusions that change the properties of those weapons.

Of course, all the slashing and striking of enemies doesn’t mean anything if the Unkindled doesn’t have any health. Estus flasks make their return in this game as well, following Dark Souls II rules where players begin with a few but can find more shards throughout the game that can be turned into more. Estus refills at bonfires like normal, but there is a twist. Since spells, miracles, and pyromancies now all use Focus Points (FP) rather than having uses per rest, a new variant called the Ashen Estus Flask fills this bar instead. Visiting the blacksmith at the hub allows the Unkindled to split his or her total Estus supply between these two types. While an interesting change, this will have a far greater effect on those who decide to be spellcasters, as melee weapon users’ only source of FP usage are some of the weapons Skills which, while useful, do not have the same drain on FP as repeated castings of spells would have. This makes it quite easy for melee users to stack healing only and rarely run into issues progressing through areas. 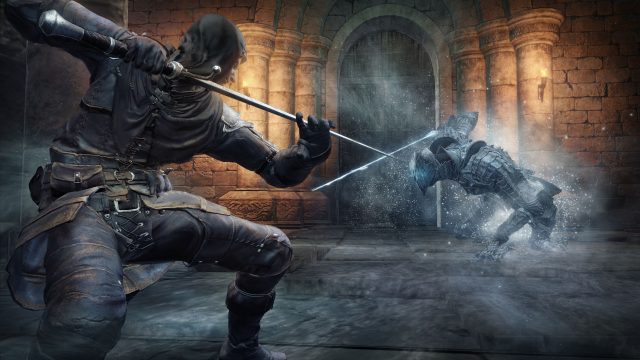 My, what a lovely sword you have.

It definitely makes boss fights easier, at least for a while. Boss fights are generally the centerpieces of Souls games and Dark Souls III is no exception. Despite having fewer bosses overall than Dark Souls II, most of the bosses in the game feel distinct from one another. By not cramming as many bosses as possible in the game, the exhilaration of coming across one and fighting it is all the greater. The bosses are a rollercoaster in terms of difficulty, but later bosses tended to provide more of a challenge than bosses earlier on. Quite a few of the bosses seem to have multiple phases, or at least moreso than previous titles. It’s not clear whether the developers decided it was more exciting to have more Ornstein and Smough-esque fights or to consolidate other possible bosses into existing ones for pacing reasons, or perhaps because they were not able to stand on their own, but be prepared to work through form one a lot while practicing against form two.

In fact, consolidation seemed to be the name of the game as far as the the game’s hub is concerned. Firelink Shrine makes its reappearance but this time it feels a lot more like the Nexus from Demon’s Souls. Like Dark Souls II, a few key vendors are present from the beginning while the more specialized ones must be found and recruited. Instead of having the vendors placed throughout the game, different themed Ashes and Tomes can be found and given to the ones at Firelink that add more items to their stock. While this is more convenient from a mechanical perspective and many of the merchants still have to be found through exploration, considering what is likely going on with the story it feels a bit weird for them to gather there in the first place.

That’s where the biggest problem with the game comes into play. Dark Souls has never been very story-driven and everything that happens must be pieced together from discovery and observation, which would make any meaningful resolution to the series not immediately obvious. So instead From Software opted to fill the game with very blatant references to the other games, so much so that hearing criticism of the game being a “Greatest Hits” or “Best of” is going to be quite common. At this point, the series has played most of its tricks and veterans will see most of them coming a mile away. The game isn’t entirely without new ideas, but in the effort to make this feel like a worthy conclusion any and everything was thrown into it.

Despite this, Dark Souls III is still a laudable experience, maybe even the best for those that enjoy the combat and the variety of playstyles the game allows. It doesn’t have the seamless brilliance of Dark Souls‘ better moments of discovery but it never suffers from that game’s more unpolished lows. Lore hounds might find some of the more flagrant aspects of the world disappointing, but from a gameplay perspective the series is stronger than ever. If this is to be the last of the classic Dark Souls titles, then Dark Souls III is a great way to finish the trilogy.