In the latter years of the twenty-first century’s opening decade, Square Enix published a decent number of experimental titles to the Nintendo DS. Some fared better than others, commercially, but they were by and large good games. One that deserves more than it got is Cross Treasures, a co-operative dungeon-diving adventure that turned out to be much better than the sum of its parts might suggest.

One thing that dungeon-diver games tend to lack is a coherent plot. Few ever go beyond the simple “Find the treasure / Defeat the boss at the end of the dungeon” paradigm. At first, Cross Treasures seems to fit squarely into that mold, as it begins with the King asking the generic hero to rescue his dear, beloved Princess Sasha. She’s been taken by a diminutive demon for obscure but probably nefarious purposes, and the two were last seen descending into the depths of a dungeon that’s mysteriously appeared on a nearby island. Right up front, the King offers the hero ownership of the island, a boat to sail there, and the entire royal treasury (though his chancellor makes him give back that last one).

This bare-bones approach lasts up until the first encounter with the little demon, on the fifth floor. For every floor unlocked beyond that point, the hero gets one more page out of the demon’s personal diary, which serves to explain why he’s doing what he’s doing and in general make him the one of the best developed and sympathetic villains to be found in many a game. The demon’s inarguably the star of the story, and with each encounter (on floors 5, 10, 15, etc.) he gets a bit more personality. It’s almost a shame the hero must beat him in the end, because it’s easy to feel for him and his reasons — even if his plans will result in a further fracturing of reality.

The reason for that “further” is simple: the Dark Dungeon is already a wild and mixed up place. It’s fifty floors deep, broken into ten blocks of five floors each, and every block is a whole different world. Floorplans are randomly assembled but persistent, remaining in place until the hero pays the nominal fee to reset the blocks of his or her choice. The fifth and tenth blocks will always be the Knight’s Castle and Dark Lord’s Palace, respectively, but the others rotate randomly between three or four different alternatives. Descending into the depths, it’s possible to go from a forested ruin to a gingerbread house to a robotics factory — and that’s just floors one through fifteen. The various worldlets have their own enemy sets, their own common items to find, and their own big bosses, which appear once the little demon has been defeated for that block. Most floors have treasure points, which can be anything from item-gathering spots and skill trainers to hot baths and ramen stands. It generally pays to reset the entire place from time to time, just to see what happens.

One of the few annoyances is the fairly rare appearance of Granny Pickles, an NPC who can alter items for the hero. The pickling process is measured in monsters slain, which can be anywhere between twenty and fifty. After that, the hero must trudge back to Granny’s spot to retrieve the item and start a new one. It’s time-consuming and kind of grindy, and unfortunately it’s the only way to get several key ingredients for cooking stat-increasing cuisine. It would have made much more sense to put her on the main island, where her services would be readily available without locking a world block from renovation while she’s needed.

One of the game’s big advertising draws was its art and designs by Shinya Suzuki, who’s since gone on to more success with his current manga series, Nanatsu no Taizai (The Seven Deadly Sins). His style is all over this game’s visuals, so fans of his work would definitely appreciate it. On the auditory side, Takashi Nitta made a good showing with the various and varied musical styles necessary to match the worlds in the game. There are straight-up fantasy tracks for castles and forests, more sci-fi techno stuff for the robot factory and cyberspace levels, slightly trippy tunes for the intergalactic zones, and even chiptunes for the two 8-bit parody worlds. 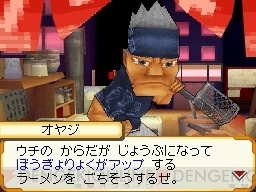 Running through the dungeon and whacking monsters is an experience this game excels at, so the aforementioned grindiness is enjoyable, at least. Cross Treasures has four character classes — Fighter, Thief, Mage, and Priest — with the option to upgrade to higher specialities through quests found in the dungeon. The different advanced classes have the same skills as their bases, but with higher skill level caps and increased effectiveness with certain attacks. Each of the main classes plays differently, and there’s an obvious attempt to encourage co-op play in the way passive skills work.

Fighting is fast and fluid. Each class has two basic skills tied to the A and B buttons, while the X and Y buttons are hot keys for the healing and magic restoration drinks. The shoulder buttons allow the player to quickly toggle between two more sets of special attacks, which consume MP and have short cool-down periods. Cross Treasures functions well as a pocket-sized multiplayer action RPG, but it remains fairly balanced for single-person play right up to the last few floors of the dungeon, when other issues start to get in the way.

Dinner parties are the best.

Despite its strong single-player capability, this is a game that is certainly at its best in co-op. It even has DS-download play options, so the experience can be shared with friends who do not possess the cartridge. There are cooperative quests and several bonus worlds to be unlocked as friends are registered. This is a game that would have done much better with the 3DS street-pass capability. Unfortunately, there’s a significant downside to the co-op stuff, one that personally affected me too much by the end.

Throughout the game, the player must rely on smithing to provide new weapons and armor, and at a certain crafting level a choice of specialization must be made. Be it weapons, armor, or accessories, there will be an opportunity cost involved. For the chosen equipment type, the player can make items all the way to the game’s best, but for the rest he or she is limited to level 40 equipment. The final boss is generally fought around level 70 or 80, and does damage to match, so players without buddies to trade with are down the proverbial hole without a torch. I managed to screw myself over in this manner, and despite all attempts I was not able to beat the final challenge of this game.

This was an unfortunate way to end such a delightful game, so my message to importers is this: if you are interested in Cross Treasures, then buy two copies. It’s not that expensive, and its non-existent kanji level makes it very good for entry-level J-gamers looking to practice the language. Get yourself a buddy with similar tastes, and have at it.