Nivalis. A city overlooking the abyss, built upon the ruins of what came before. A city divided into societal castes, separating the wealthy from the poor, the flesh-and-bone from the sentient and artificial. Nivalis is a city on the brink of an upheaval. The tenuous existence between Man and AI is about to reach a critical zenith: the artificial intelligence governing many of the city’s municipal functions has become increasingly unreliable, causing the city to further deteriorate.

This is the world players step into in developer Ion Lands’ Cloudpunk. More specifically, they take on the role of Rania, a brand-new resident of Nivalis who has just started her very first shift as a driver for the game’s eponymous off-the-grid delivery service. As her first night in Nivalis gets underway, the game throws players right behind the wheel of Rania’s HOVA, her rocket-propelled hovercar without any further preamble. Players will spend the next ten-or-so hours cruising through Nivalis’ vast vertical districts or hopping on the city’s highway for longer distances as they experience a well-told story and meet a colorful cast of characters. It’s an atmospheric good time, held back only by some uneven optimization evident in some of the game’s ports to other platforms.

Cloudpunk‘s story unfolds almost exclusively within Rania’s HOVA and over the car’s radio receiver, with characters and conversations frequently not visible outside of the character portraits that accompany dialog and gameplay only serving as a vehicle (pun intended) to give the player some interaction as the story unfolds. As a delivery driver, it’s Rania’s job to ferry items, both illicit and legal, and passengers from point A to point B. There are only two rules she has to abide by: never miss a delivery and never ask what’s in the package. Generally, this means steering her HOVA through Nivalis’ congested traffic patterns toward the next nav point on the mini-map while conversations between the cast of characters play out. Occasionally, though, players have to park their vehicle and proceed through the city on foot. It’s important to approach Cloudpunk with the right expectations, as combat is entirely absent and sidequests and free exploration are rather limited in scope. 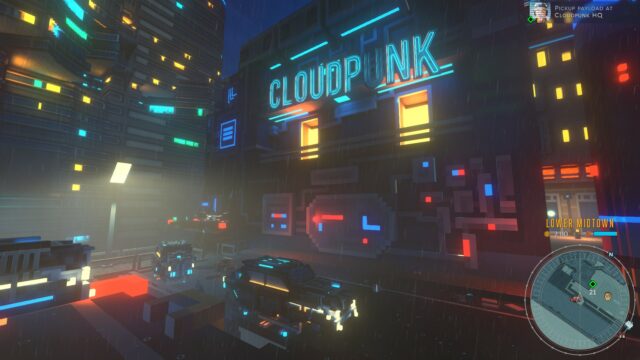 The iconic Cloudpunk HQ building as seen from street level.

It’s good, then, that the story is engaging. Like any good dashboard confessional, the flavor and heart of Cloudpunk comes from the myriad of self-contained story arcs and interesting characters Rania meets over the course of her night. Notable highlights include Lomo, one of Nivalis’ most notorious gangsters who assigns Rania a dubious job, and Camus, Rania’s AI dog whose program has been uploaded into her HOVA instead. Rania also gets wrapped up in the city’s underground street racing community and squares off against a gung-ho government agent with an axe to grind. As the night unfolds, players get to better know Cloudpunk’s aging dispatcher, Control, via his frequent radio communications and even he has his own story arc that eventually pays off. There is also a narrative thread to unravel directly involving Rania herself, though it takes a little while to get to it. The game is an unhurried affair, moving forward at its own deliberate pace, with a new mission starting only after the previous one has been completed. The lack of a quest log to keep up with and the narrative’s easy flow also make a great fit for shorter gameplay sessions.

The languid pacing meshes well with the game’s relaxing and melancholic atmosphere, which is further reflected in its visual design. Nivalis is a visually striking place, full of monolithic structures rising out of the ruins of the old city below and stretching up impossibly into the clouds above. The nocturnal setting plays well into the feeling of exploring a city’s hidden underbelly, although the dense cloud cover and perpetual rain strongly suggest that even daytime isn’t much brighter. The game superbly dials in that intangible sensation of deepest night, when loneliness and solitude are at their peak and dawn seems a million years away.

Nivalis itself is an outstanding example of strong visual design, whether exploring it on-foot or while flying through it. The myriad of different-colored lights shining out of windows, billboards, storefronts, and other vehicles stand in relaxing contrast to the dark sky surrounding them on all sides. The look effortlessly draws comparisons to Blade Runner-esque imagery, and one would easily be forgiven for not even noticing, at first, that the whole world is designed in a voxel art style. However, mileage varies greatly here, with the Switch port being markedly inferior to its cousins. Draw distance on Switch is greatly decreased, with structures in the field of vision constantly popping in around the player when flying through the city. What is elsewhere a vibrant spectacle is made far less so, with the atmospheric skyline muddled in murky fog and a generally uninviting gunkiness. Optimization also takes a hit on Switch, with lengthy load times when entering a new section of the city that the other versions don’t even come close to. Cloudpunk is designed to be a visual treat, though the amount of eye candy on display varies greatly from platform to platform. 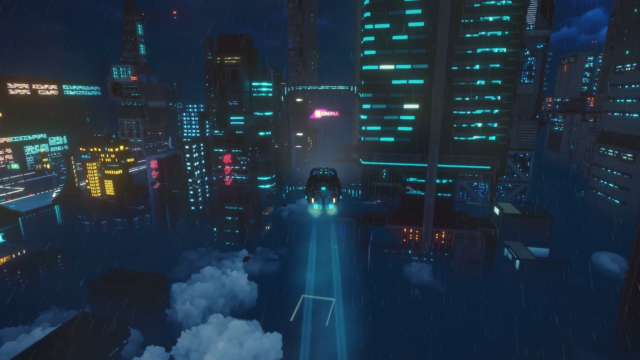 What flying through a nocturnal Nivalis looks like elsewhere… 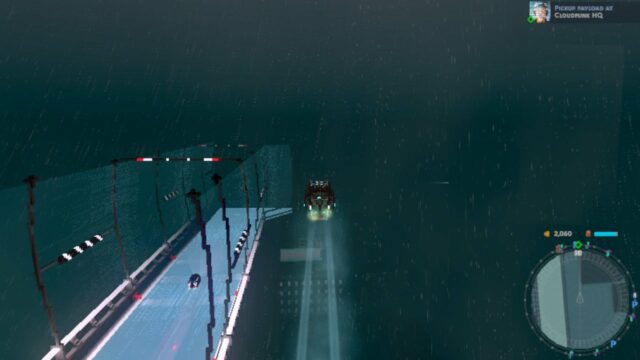 …and what Switch players got.

The game’s audio, however, shines no matter the platform. Foremost is the fully voice-acted cast of characters, with standouts including Rania, Control, and Camus, whose voice actor does a great job portraying the loyal and confused simple-mindedness of a dog who has found himself to suddenly be a vehicle. Another character made memorable with strong writing and voice acting is Huxley, a private detective android on a case to find a missing girl, complete with trenchcoat, fedora, and a Philip Marlowe/Sam Spade third-person narration style. This strong showing is only occasionally undermined by some incidental characters who don’t exhibit the same level of quality as the main cast.

Cloudpunk is the kind of game that places importance on narrative over gameplay and one that will feel considerably better on different platforms. It offers a memorable narrative with some great characters to meet along the way, and it’s admirable just how invested one can get in them considering their existence starts and stops (in most cases) with an on-screen character portrait and a voice-over. The city is vast and beautifully designed using voxel art, though players on Switch won’t bask in as much of its visual splendor. However, it’s also a game in which the narrative trumps all, even gameplay, with the only player interaction coming in the form of somewhat superficial vehicle sections and the odd on-foot segment. It’s a relatively short ride and well worth taking, as long as one’s expectations are dialed in correctly from the outset.