Saving the World the Sentai Way

Originally funded through Kickstarter back in 2013, Brazilian indie developer Behold Studios’ Chroma Squad is a tactical RPG which sees players producing their own tokusatsu series much in the vein of Power Rangers, Kamen Rider, etc. Taking a group of stuntmen unhappy with their current roles, players fight for their share of the audience before the line between reality and TV show starts becoming rather blurred. Chroma Squad may not be the deepest tactical RPG around, but it brings a high level of enjoyment throughout.

Players start out by selecting five actors out of the pre-determined group to fill their sentai squad’s roles — Assist, Techie, Lead, Assault, and Scout — which double-down as the game’s classes. There’s a small bit of customisation allowed here, letting players choose the show’s characters’ names and their associated colours. Events begin with said actors as stuntmen in another sentai show, before deciding that they could do a much better job and have more fun by creating their own studio rather than sticking with their current overbearing director. Setting up in an unused warehouse owned by one of the cast’s relations, the group even manages to find a prop brain-in-a-jar named Cerebro to help set up the new show’s various episodes.

The story, which takes place over five seasons of five-to-eight episodes each, isn’t the deepest, with humour and usage of all the requisite tropes of the genre taking precedence in an effective manner. Even when it plays things a bit straighter, Chroma Squad never tries to take itself too seriously and feels the better for it. The story and premise remain fun throughout, and the cast is all engaging and likeable. There’s a lot of affection on display for the TV shows that inspired the game, and it shines through in abundance. References vary greatly in degrees of subtlety and minor grammatical and spelling errors pop in a bit more frequently than necessary, although the ones that are clearly deliberate help to slightly soften those that are not.

There is some semblance of choice with the order the episodes in each season are tackled, but all will need to be completed to progress. Some choices come with responses to e-mails received by the studio from fans or other members of the public. These options don’t affect the overall story and usually provide only small bonuses if anything, but the letters themselves add a nice touch to the premise, particularly when follow-ups are received later on the game. The only major choice in the game comes in the final battle in the penultimate season, where players can go down a few different final seasons inspired by different tokusatsu series, though unfortunately the single autosave per campaign means players will have to replay the entire game in order to see the others. 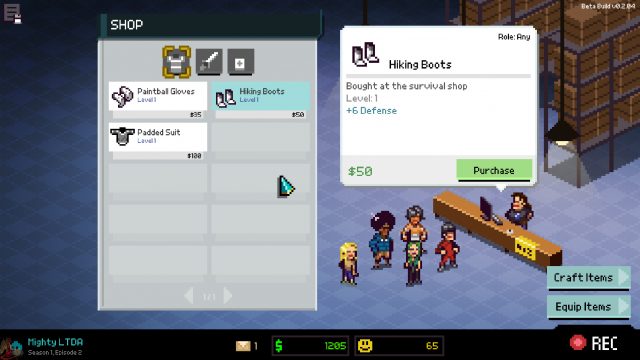 Only the best in home-made outfits for my series.

The battle system is pretty straightforward as tactical RPGs go, with the game controlled entirely using the mouse. Characters can move and then attack during their turn, with a number of skills also available and the attack action replaceable with a second move. Chroma Squad adds a few things of its own with teamwork actions, the audience gauge, and director’s instructions. Players can choose to hold off on the attack action for a teamwork action instead. This does one of two things; firstly, it allows characters to team up on an enemy and cause more damage in a single strike than two separate ones, with all five characters acting together providing a special finishing move. Secondly, it allows the other characters to move farther by getting the teamworking character to acrobatically launch the other the extra distance. This works hand-in-hand with the director’s instructions, which provides large bonuses for completing certain tasks, such as winning in a certain number of terms or defeating the boss with a finishing move. At the end of the episode, the audience gauge is used to determine the episode’s success plus any money and new fans gained.

All these systems are contribute nicely for the general dynamic of the game, but don’t quite add enough by themselves to reach the depths seen in tactical games elsewhere. The lack of depth and general repetitiveness starts to become an issue towards the latter stages. Battles often play out the same way, with a limited number of victory objectives and almost nothing in terms of map-based factors. However, this is somewhat mitigated by the game’s relatively short twelve-to-fifteen-hour length ending things before combat starts to become too stale.

The majority of episodes beyond season one end up with the enemy boss monster growing to building-sized proportions, for little reason other than to give our heroes cause to pile into their mecha for a final showdown in true sentai style. Mecha fights are completely different to the usual tactical gameplay. Players can choose to attack, defend, or use one of the skills provided by the mecha’s selected parts. A successful attack allows for another action, with the hit chance reduced by ten percent, and adds to a multiplier effect for subsequent actions. However, a miss will cause the turn to immediately end and prevent the player from defending the opponent’s upcoming attacks. Enemies are always limited in their turns to three standard attacks or one super attack, with players further reducing the damage taken with a quick-time click. These Mecha battles can be a bit finely balanced, with the defensive quick-time event often being fairly key to success, but they work nicely in providing a grand conclusion and helping mix things up somewhat following the tactical portion of the episode. 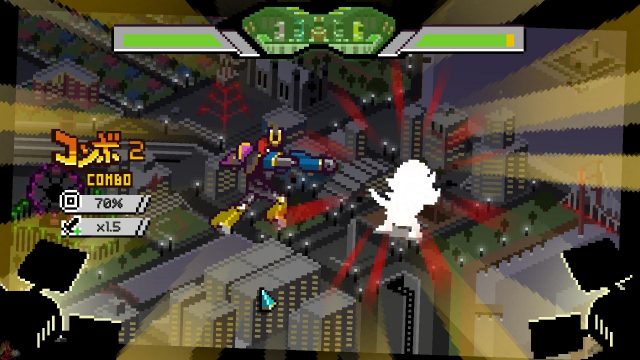 Arbitrary mecha fights are a must for any true sentai series.

There’s no experience or leveling up for characters, with stat-enhancement handled entirely by Chroma Squad‘s equipment system. Equipment can be either bought or crafted. The simple crafting system adds a nice touch early on but falls to the wayside in latter seasons, at least partly because potential stat increases are unknown until after the item is crafted, a problem not present when outright purchasing new equipment. Skill progression also comes with each new season, with the characters getting access to a new group of one to three skills. Players can choose one skill from each season’s group to have active for each character but it’s very rare that players will need to switch skills after the initial choice. Players also get the opportunity to enhance their studios and grant various passive bonuses, but it’s all fairly linear and again becomes a non-issue towards the end once everything is fully upgraded.

Experienced RPGamers won’t find too much challenge in two of the three difficulty settings selectable at the start of the game, although there will still be a few challenging battles on the second setting. At the time of writing there isn’t any New Game+, although the post-credits text hints one may be in the works. Some replay value is present in the few different paths that can be taken in the final season and the option to try the more challenging difficulty, but aside from that there are not too many reasons to return to the game after its completion.

The retro pixellated graphics and chiptune-inspired soundtrack work really well together. A lot of effort has seemingly come into Chroma Squad‘s visual design, with neat animations and designs on all the characters and enemies. It’s also nice to see the characters’ uniforms noticeably change with different equipment. Locations are well put together, although it would’ve been nice if the game provided something extra by way of environmental hazards or other such factors. The music tracks are all very catchy, and come complete with a cheesy Japanese theme. Audio effects also feel in tune with the visual style.

Chroma Squad is a very enjoyable love-letter to tokusatsu series. Things are by no means perfect; it’s easy to see the gameplay falling a bit flat when taken on its own without the oodles of fun that comes in the story, premise, visuals, and audio. However, those who grew up watching Power Rangers and its ilk will greatly appreciate this opportunity to relive the memories and have a small hand in the creation their own version.