In the year 2035, high school student Soma Cruz was heading to the Hakuba Shrine to view the eclipse with his friend, Mina Hakuba. Instead of reaching the shrine he found himself transported to a gloomy castle, which he was soon informed once belonged to the dark and evil Count Dracula. Much to Soma’s chagrin, a man there was seeking to use the castle, its seal weakened by the eclipse, to attain the power of the Dark Lord himself. Soma’s only way out was to fight both for his own life and the lives of his friends while utilizing his power to dominate the souls of monsters. That was Aria of Sorrow, and after it was over, Soma probably expected to live out the rest of his life peacefully. Fate would not be so kind. One year later, Castlevania: Dawn of Sorrow begins, and Soma finds himself hunted by a deranged cult that wishes to find a new Dark Lord by killing him and releasing his power.

Dawn of Sorrow is the rare direct sequel in the Castlevania franchise, finding the same hero once again entering a twisted, labyrinthine castle filled with uniquely designed levels, monstrous creations, and wicked bosses. The castle this time around isn’t Dracula’s – who is once again completely absent from the game – but a replica created by the cult and its leader, Celia Fortner. For Castlevania veterans who have been through a thousand iterations of Dracula’s keep, the castle of Celia’s cult proves a breath of fresh air.

While still featuring plenty of the standard locales to which longtime fans have grown accustomed, Dawn of Sorrow also introduces a number of interesting and uniquely new levels that are extremely fun to slice, whip, and punch Soma’s way through. For instance, the Lost Village level on the outskirts of the castle takes advantage of the game’s futuristic setting, with cars, trucks, and an underground sewage system. All of the levels, though, are well designed, pleasant to look at, and full of detail. This is essential, of course, since aside from the game’s opening and ending sequences, the entirety of the game plays out inside the cult’s headquarters. Given that, the location manages to hold the player’s interest and attention.

Attention to detail is present throughout the rest of the game, too. Dawn of Sorrow excels at creating a pervading theme and atmosphere in each of its varied levels, and each provides an enormous amount of detail that help make the castle feel like a more realistic location. For example, as Soma jumps on cars in the Lost Village, a cloud of snow falls off of them, and the Garden of Madness is filled with a hundred varieties of flora of all designs and colors. Soma can place himself into the background by sitting down in chairs, and there are always dozens of things going on in those same backgrounds. Sprites are well designed and animated, as are the game’s many monsters. And the bosses deserve a special mention: some are routine holdovers from previous titles, but the new bosses are exceptionally creative. The graphics are in general wonderful 2D at its best. 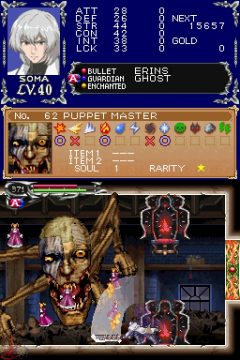 In avoiding returning to the Dracula trough, Dawn of Sorrow attempts to continue the somewhat original storyline of Aria of Sorrow. All of the surviving characters from Aria return, and the game does a good job at presenting an untraditional story. Since the game is a continuation, the story is a bit less original this time around, but it still manages to hold up well. The developers beefed up the story and characterization a bit to make up for the diminishing originality of a direct sequel, and their efforts paid off: the characters come across as individual, interesting, and mostly compelling, each with their own motivations for being inside the cult’s headquarters. Because of the direct sequel nature, many may be disinclined to try Dawn of Sorrow if they haven’t played its predecessor. Konami thankfully addresses this potential concern by including a library feature. Using this, the player can get information on all of the game’s characters, locations, and details of the events of one year prior.

The one major flaw with Dawn of Sorrow‘s story is that it’s a bit on the thin side. In the game of this nature, obviously the focus needs to remain on the hard-hitting action. That said, Dawn of Sorrow would not have been hurt by a few more story sequences, and they probably would have helped in bulking up the game’s length a tad, as it is on the short side. Fortunately, whatever it loses in length it more than makes up for in replayability. In addition to the standard Boss Rush Mode and Julius Mode (in which the player can utilize vampire-slayer extraordinaire Julius Belmont), Dawn of Sorrow also allows players to construct their own levels and battle wirelessly against other players in them. As for Julius Mode, it’s drastically enhanced over what was featured in Aria of Sorrow, this time giving Julius new allies that can be used as playable characters, each with their own unique abilities.

Ultimately, the greatest draw in a game like this is in the main gameplay, which is Soma’s exploratory trek through the castle, whereby he’s forced to slaughter hordes of monsters standing in his way. The gameplay excels, pure and simple. Rather than reinventing the formula, as each Castlevania RPG since Symphony of the Night has done, Dawn of Sorrow sticks with its sequel role and incorporates nearly all of the gameplay elements found in Aria, refining and enhancing them. The Tactical Souls System makes a triumphant return, enabling Soma to collect a soul from every monster in the castle, with the souls divided into four types: Bullet Souls enable magical attack spells; Guardian Souls summon familiars or lasting magical effects the steadily drain MP; Enchant Souls give Soma some sort of status change; and Ability Souls, the only kind always in effect, allow Soma to perform a new move or technique. 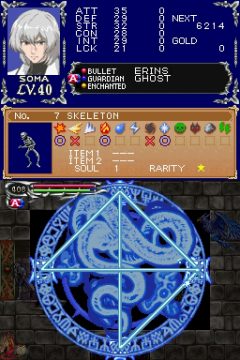 Destroying a Soul with a Seal

Souls are much better integrated into the gameplay of Dawn than they were in Aria. This time around, Soma can collect up to nine instances of each monster’s soul, and the more he collects, the more powerful the souls become, often changing their appearance and effect. For instance, collect one Rykuna soul and Soma can hurl a lightning bolt. Collect more, and he becomes able to perform a dazzling chain lightning attack that will fry every enemy on the screen. Soul collection also plays a role in the new weapon synthesis system. Rather than having all of his weapons found through exploration or from purchase in Hammer’s shop, Soma can now synthesize new weapons by forging a weapon with a soul. It’s a nice system that works to give added use to the collection process.

A few new features are added to make use of the Nintendo DS’s unique capabilities, and for the most part, these range from extremely useful to ignorably harmless. The best addition is the constant display of the castle’s map in the top screen. In a game as exploration-driven as this, the ability to go about exploring without the need to constantly toggle out of the action to review progress is incredibly beneficial. The other major addition is that of magic seals. In Dawn of Sorrow, Soma must destroy not just the bodies of major enemies, but also their souls. What this means is that once a boss’ physical form is defeated, Soma must trap the soul away through a magic seal. A circle will appear, and the player must draw a symbol within it or the boss will revive with a small amount of HP. While one could perhaps argue these seals as gimmicky, the idea of ritualized symbol magic fits within the gothic atmosphere of Castlevania and adds a nice bit of additional challenge to the game. Other uses of the touching capability include commanding familiars and shattering blocks, both of which are pointless, but they don’t actually do any harm through their inclusion.

Castlevania: Dawn of Sorrow is not the most innovative game for the DS, and nor does it contain the most epic story. But the game proves that innovation isn’t always necessary when it comes to refining a classic format, and Dawn of Sorrow is easily the equal of its distant ancestor, Symphony of the Night. What the game does is provide intuitive, challenging, and fun combat that never gets tiring, while allowing enjoyable exploration in a beautiful, intriguing setting. The game is wonderfully suited to the portable nature of the DS, as it can easily be picked up, played for a bit, and then shut off, and its replayability and challenge both mean it will rarely grow tiresome. This is one game that no DS owner and lover of RPGs should be without.