Germany-based developer and publisher Daedalic Entertainment has been around a decent amount of time and been responsible for a good selection of adventure and puzzle games. However, it has seen fit to break out of this mold and create its first RPG, Blackguards, which utilises the popular German Dark Eye tabletop setting and rule set. For the most part Blackguards is a pretty enjoyable and engaging time, but there are significant areas that hold it back.

The titular blackguards are headed by a player-created character, including gender selection plus a small number of appearance options and either a basic template or detailed set-up of abilities. In the game’s beginning, the player stumbles across the corpse of their friend Princess Elanor, seemingly in the process of being devoured by a large wolf. However, the wolf disappears shortly before the player is discovered next to said corpse and they find themselves accused of the murder and tortured into revealing a mysterious name by another friend, Lysander. Joining the main character is a small crew of criminals and ne’er-do-wells as they escape prison and try to establish Lysander’s motives, including the arsonist dwarf Naurim, the greedy ladies’ man Zurbaran, the Dreamweed-addicted elf Niam, the gladiatorial slave Takate, and the witch Aurelia.

The main cast does a good job keeping players engaged, the main party providing plenty of personality and enjoyable snark. Unfortunately, the cast isn’t really backed up by a very good story. There is an interesting one buried somewhere in the ether, but a lot of details and events are left purely as implications or uninteresting one-line summaries. Some plot points seem to rely on passes of the trusty idiot ball, especially as any antagonist motivations aren’t well explained. Things come to a head towards the game’s climax as this part of the plot feels rushed, glossing over events, leaving players in the dark as to what is actually going on, and culminating in a very brief and unsatisfying ending. 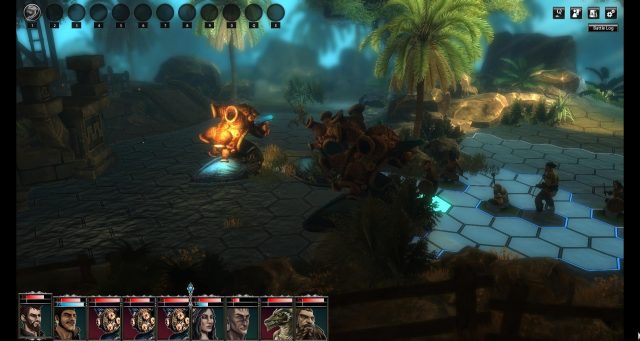 The opportunity for lots of bee-based enemeies was sadly missed.

A decent number of side quests add some much-needed life and depth to the setting, which is generally sorely lacking in any real lore or world-building details. Judging from the specific mentions of gods and other apparently important figures, the setting should include some interesting details but the game seems to assume that players are already well-versed in the world rather than providing any flavour itself. There are a significant number of cases where there is a choice in how a quest is approached, which can affect latter points in the game both in a story and player reward form. Unfortunately, the lacklustre ending will do a lot to make players doubt the point of some of their often conciliatory versus violent decisions in the grand scheme of things. Those looking for significant dungeon exploration will need to look elsewhere, as progress simply comes down to clicking on the next location of choice before arriving at the next scripted battle or event.

Outside of a simple yes/no on whether characters can cast magic the system is very flexible in letting players build characters as they want. There aren’t any set classes, so players can freely put characters into roles of their choosing as they grow. There aren’t any really levels to speak of either. Each character is awarded a share of XP after each battle or quest completion which players can spend as they wish on various attributes, abilities, spells, and proficiencies. There are lots of different ways to build up the party’s strengths and the pure level of character customisation is definitely one of the game’s strongest points. The customisation is intuitive and it isn’t at all hard to realise the appropriate complementing aspects for characters to fit into certain roles.

Blackguards‘ turn-based combat takes place on a hex-based grid and follows a basic initiative-based turn order. Characters turns end once players undertake an action, but they can move a certain amount before any action is taken or sacrifice their action to move further. Players also have the option to hold their action until the end of the turn should they wish to move after another party member or wait for an enemy to wander within range. The rule set is pretty intuitive and easy to get the basics of, although some players may get annoyed by the fact that actual rolls are hidden from view. The game’s battle log and skills pop-ups do provide very useful percentage chances if the player has invested enough ranks in relevant talents, however. 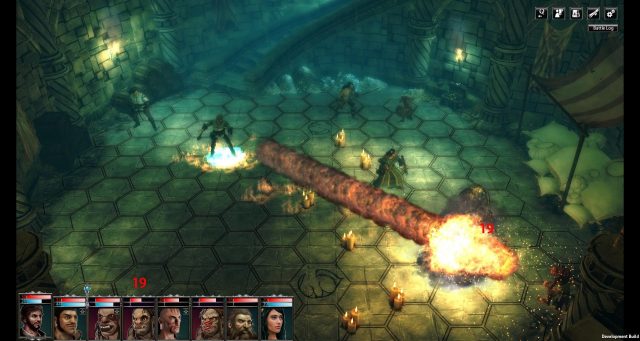 A lot of battles feature some decent puzzle aspects, which often adds depth and challenge but is also responsible for frustration in some cases. There are a few that will cause significant annoyance, the majority of these being ones that feature constantly spawning enemies, with such battles only over if players manage to wipe out all remaining enemies within a single turn, or when it throws out multiple battles in a row without opportunity for players to heal. It’s not helped that the game is not forthcoming with such details, requiring players to figure it out on their own. Blackguards isn’t afraid to throw in considerably more challenging encounters every now and then, but thankfully gives players the option to restart a battle at any point should they find themselves in a tough situation. There are three difficulty settings, which can be switched between at any time, but even the easiest will still require players to think tactically.

The game is fully voiced in multiple languages, with very solid English voice acting for the main cast that matches the characters personalities very well, though the acting for the incidental characters is very variable in quality. Blackguards‘ music is decent where it exists (most places rely on bird-filled ambiance to fill the silence) but generally rather forgettable. The visuals are perfectly functional, never outstanding, but do provide distinct and interesting locations and characters. On a more technical front, the frame-rate doesn’t quite appear fully optimised, as it often chugs when there are a lot of environmental or magical effects going on. At the time of writing, there were also a couple of minor issues including a couple of cases of the game freezing and some Steam achievements apparently not working, but Daedalic Entertainment has been working on patches.

Blackguards is a fairly decent first go, and fills up the roughly forty hours it takes to complete, including most side quests, quite nicely. However, there are several areas that could see significant improvement, particularly when it comes to building the world and story, and the very sub-standard ending leaves a feeling of untapped potential and a game that isn’t as complete an experience as it could’ve been. On the whole, it’s certainly a passable first effort but still quite rough around the edges.