Inspired by the 17th-century folklore of Belgium and the Netherlands, Black Legend is set in the dark boroughs of the forsaken city of Grant. It offers an immersive experience with many places to explore and sidequests, featuring cultists, deadly fiends, and mercenaries in turn-based battles. Although the story is about madness and destruction, the journey, which is well balanced between exploration and combat, is quite enjoyable and will satisfy tactical RPG fans and horror-game seekers.

Players create their own avatar by selecting gender, physical traits, and name. Then, this personalized warrior is tasked with leading a group of mercenaries to liberate the cursed city from cult followers, hostile fighters who follow the orders of Mephisto. The main objective is to find a way to dissipate the madness-inducing fog that covers the whole city. Although Grant seems doomed, the band of mercenaries will try to rescue as many civilians as possible. These civilians, however, are hidden inside their homes because the streets are filled with threats: nekkers, hounds, and other creatures inspired by European folklore.

The gang of heroes befriends a resistance group called the Gilded Claw that helps them by providing intel about the city struggling toward its salvation. Besides the main objective, players can freely explore the city and find people in need of assistance, completing errands that feature a vast array of historical elements. Since Grant is an enormous city, it is divided into districts, each with visual peculiarities and quests. As the story progresses and districts become available, the secrets of the city are unveiled little by little. The city itself is enough to create an immersive environment, but while the story is tailor-made for this place, it lacks something unique and noteworthy. 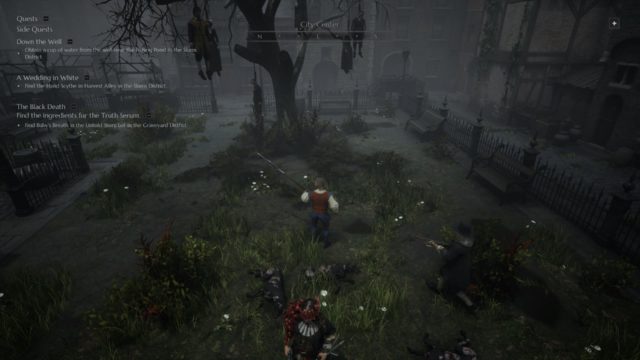 Diverse objects and denizens are waiting to be found in every district.

The game includes a turn-based tactical battle system in which characters spend points to move and perform actions. Before the battle begins, players deploy a party of four in the highlighted section, which changes depending on how foes were approached. Each warrior has a range of movement, a set of abilities, and two slots for items. The use of items, however, does not cost any points. Provided they have enough points, characters can move or undertake actions multiple times per turn. There are healing, attacking, and buffing abilities, with some  inflicting status effects such as bleeding, poison, or disease. In addition, attacking from behind or flanking opponents increases the damage dealt.

The differentiator given to this commonly-used combat system is the addition of alchemy, a system based on the four stages of the magnus opus. Alchemy is extremely difficult to grasp when the tutorials appear at the beginning of the game, but it becomes a little clearer after a while. There are four humours represented by colours: red (rubedo), yellow (citrinitas), black (nigredo), and white (albedo). Every time an ability that includes one of these colors is used, the receiver of the action gets affected by the humour. When two of these humours are combined, a catalyst is created. If a character is affected by a catalyst, the catalyzing attack deals more damage. In addition, stacking humours also grants secondary effects, such as external bleeding. Enemies use the same system against the party, so players need to be careful and try to clear humours from their characters by using items or abilities. The alchemy system is very well crafted yet unnecessarily complicated and briefly explained. More tutorials or some icons indicating the result of the combination of humours would help a lot.

Party members gain experience with every action, so they level up quickly. The fifteen classes not only include abilities, but also affect the growth of characters, for each class has a different balance of stats while leveling up. To gain new abilities, party members need to adopt a class, equip the specific weapon from which the ability can be learned, and use this skill in battle several times. Learned skills can be added to the set of abilities regardless of current class, with a limit of three. Some classes, such as inquisitors, buccaneers, and plague doctors, offer some nice originality.

Difficulty settings are selected at the beginning of the game and can be highly personalized. Players not only have the option to choose between easy, normal, and hard difficulties, but also make a customized setting in which they activate or block some features, including the use of philosopher stones, which are used to revive fallen warriors. With all these elements combined, battling is very enjoyable and certainly a highlight. 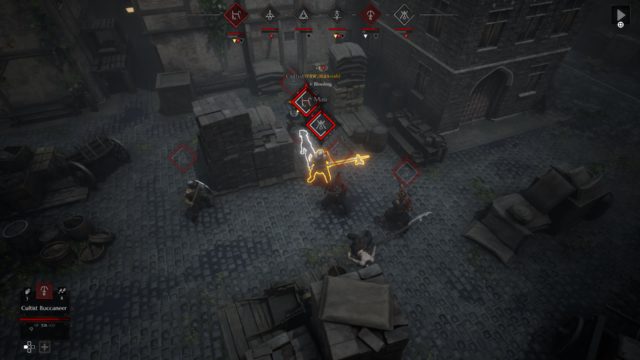 Color triangles mark the humours that affect each character.

Exploration is the other important mechanic of the game. Although the lack of a map seems like a negative aspect, it makes sense after a while. Instead of a map, Black Legend has an indicator that shows whether the player is going north, south, east, or west. The town streets are full of signs that point to places of interest. To make it even less complicated, the city is divided into several districts, which include only around ten places of interest, and most quests indicate a district and a specific alley or location. In addition, water wells eventually become available to fast travel among districts, making exploration easier and faster. A map would be helpful, but the absence of it challenges players in other ways and fits the overall foggy mood of the game.

The Merchant’s Guild, located in the Commoner District, is where players find shops and denizens who help with the main quest, as well as the barracks where players can switch party members. New recruits appear along the way, but since all of them are able to adopt any class, it seems better to stick with a group of mercenaries and level them up rather than switching members constantly. Since there’s a lot to explore in every district and some sidequests have many steps, the game can be as long or as short as players want it to be. Quests aren’t repetitive and include diverse steps, such as retrieving an item, finding someone, defeating an enemy, or killing certain enemies under specific conditions to take their souls.

Most sidequests are given by citizens of Grant hiding inside their homes. The presence of these NPCs is marked by lamps outside their houses. Completing these side quests is rewarded with money or items. The game includes a lot of different items, such as weapons, armor, money, trinkets, and expendables. The foggy boroughs of Grant also hide many of them. Cultists, mad mercenaries, and other foes that lurk the streets also drop items. Entering the line of vision of enemies triggers battles. However, players can avoid battling in most cases. Exploration is really smooth and there is a lot of content beyond the basic storyline, resulting in many more hours of gameplay for those interested. 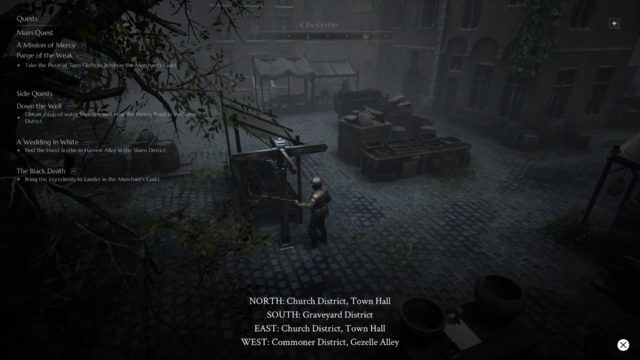 The city can be overwhelming, so street signs are extremely helpful.

One of the few issues of the game is that the interaction seems to be planned primarily for PC, so using a controller tends to feel strange at times. Dashing through menus is counterintuitive, and selecting spots on the battle grid can be tough in some scenarios that have different altitudes. Shops have no record of already-owned items and don’t have an option to specify the quantity of items to buy or to sell. Apart from that, the game can crash unexpectedly and includes some strange bugs. For example, players can talk with new recruits several times, resulting in multiple copies of the same character joining the party. This review is primarily based on the PlayStation 4 version of the game, and the performance is noticeably better on the PlayStation 5, but crashes are present on both. These crashes appear while battling and after completing some side quests.

The architecture and 17th-century objects underneath the foggy cover look amazing. A permeating darkness and hanging bodies decorating the whole city help to set a desolate feeling and create a great atmosphere for a horror game. Visuals and creatures inspired by folklore are accompanied by an interesting sound design that offers a hostile yet enjoyable sonic tour around the city. More than music, the soundscape was environmentally designed with screams and effects that give life to the city. Some boss battles include tracks composed in a more traditional way, but they aren’t powerful enough to linger in players’ minds. Nevertheless, the overall approach of the sound design is notable and has a great bit of originality.

Even though Black Legend uses a lot of common features, they are blended in an original way. With the addition of alchemy, battling never gets boring, even when it takes hours of gameplay to be proficient in it. The background folklore offers ingenious classes and enemies, as well as a solid basis for the visual style. Players would do well to avoid the madness-inducing fog trying to make them overlook this game. 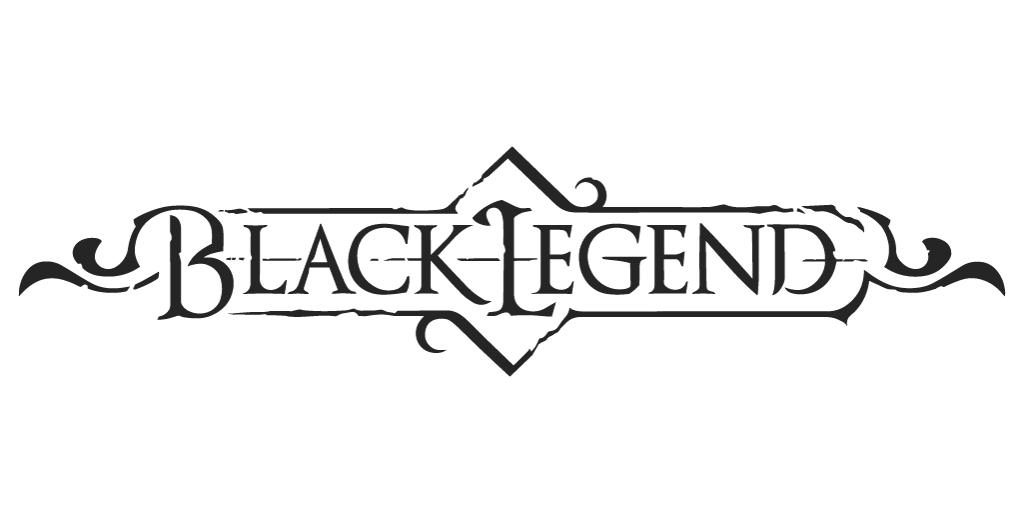