Developer Warcave revealed new details for its upcoming title Black Legend. The update features a look at some of the folklore-based enemies appearing in the game, which include (descriptions provided by Warcave):

Old Red Eyes — Traditionally, this cannibalistic shapeshifter appears as both a large 7-foot / 2.1-meter tall man and as a large black dog with fiery red eyes. This beast is best known for stealing children from their beds and then eating them. During the 20th century, a new monster grew from the legend of Old Red Eyes. Stories of the Nekker, discussed further below, are believed to have roots in the legend of Old Red Eyes.

Nekker — The Nekker has many names, including Nyx, Williger, Icker and more, and is most commonly described as a large, shape-shifting water demon. This beast preys on children who get too close to water, or on adults who are lured to water by the demon disguised as a drowning child in need of help. Once captured, the Nekker sucks its victim’s blood using a hook and then captures the soul in an upside-down urn.

Witte Wieven — These “White Women” or “Wise Women” appear in stories from various parts of western Europe, dating back to at least the 7th century, pre-Christian era. Appearing in white garments, often in groups of three, who could help or hinder people who encounter them. If aggravated, Witte Wieven are known to roast and eat cats, make people disappear by spiriting them away, and are known to steal babies from their cradles, never to be returned.

Lord Halewijn — Elements of this ancient, terrifying tale date back to the 7th century AD, and is one of the oldest Dutch folk songs recorded. Several versions of this story exist, but the common theme is Lord Halewijn, an evil being referred to as a demon, faery lord or magician who sings a magical, luring song. Anyone drawn to him by this song is murdered, either by beheading or by being turned to stone.

Blood Carriage — Possibly derived from Germanic god Wodan’s army of the dead, the Blood Carriage is a terrifying tale of three masked men who prowl the night looking for children to abduct in their blood-dripping carriage. Any children found outside after dark were abducted and brought to the demons or “Toecutters” who stay hidden in the cart. Depending on the version of the tale, the children were killed and their bodies sent away, or the demon would cut off their toes and feast on their blood. 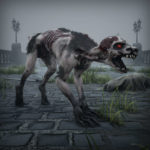 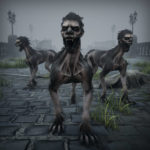 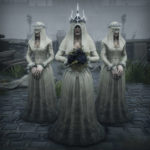 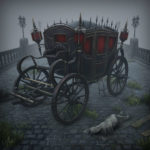 Black Legend is heavily inspired by 17th-century folklore and stories from Belgium and the Netherlands. Players lead a band of mercenaries into the city of Grant, which is currently shrouded in a madness-inducing fog and under the control of cultists following the great alchemist Mephisto. The game is in development for PC, PlayStation 4, PlayStation 5, Xbox One, Xbox Series X, and Nintendo Switch and is planned for launch in 2021.