Aside from minor wrinkles that can be ironed out, Black Legend shapes up to be a horror-tinged title able to satisfy both tactical RPG enthusiasts and newcomers.

RPGamer was given the opportunity to try out a demo for Warcave’s Black Legend. The game is a turn-based tactical RPG that sees a squadron of mercenaries entering the cursed town of Grant in order to discover how to get rid of the ominous fog that envelopes it. This entails facing off both with the mad cultists that have taken over the city, spearheaded by their leader Mephisto, and the beasts that roam its streets, which are based on European folklore.

After creating the main character, a royal soldier sent to aid the local resistance, the demo doesn’t waste time in throwing the player right into the action. Gameplay is diveded in two phases: exploration and combat. The first sees the player controlling their character in real time, investigating the alleys of Grant in search of items and equipment that will be useful in their quest. This is where the atmosphere of the city has its time to shine. Both the 17th century-inspired architecture and sound design convey the hostile nature of the setting. Dead corpses hang on the brick walls of buildings and off the wooden planks of the harbor, while distant screams and screeches fill the otherwise silent alleyways. The only hint of civilization is given by the lighted lamps that signal the presence of suspecting NPCs that can fill the player in about the game’s lore. More lucky encounters feature survivors that can become possible new additions to the party, often in exchange for an item. 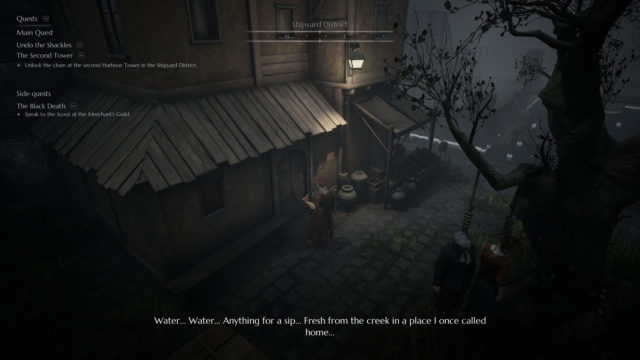 The city’s residents are barricaded inside their homes, but they may still give assignments to the player.

The city’s fog doesn’t hide just treasures and allies, but foes as well. Enemies have their own field of view, and getting around them is possible if the player doesn’t feel like fighting. Entering their line of vision will trigger the game’s combat mode, which has its own set of rules. Players are prompted to move their fighters to their starting position before any encounter, during which every unit can move and perform actions during their turn. Both action and movement have their own supply of expendable points determining what units can do and how far they can travel.

The main strategy employed to eliminate foes relies on exploiting alchemical imbalances. Some skills at the player’s disposal apply “humours” to the targets. There are four kinds of humours, each identified with a colour: red, yellow, black and white. When a matching pair is applied to an enemy, the Catalyzing Attack action will deal a higher amount of damage by expending the humour points applied to the selected foes. Stacking a higher quantity of matching humours leads not only to higher damage, but also provides secondary effects thanks to equippable trinkets, such as improving a unit’s statistic when using a skill that applies a given colour. This mechanic is available to enemies as well, so players have to be mindful of the humours that are applied to their own characters and avoid being on the receiving end of sudden damage bursts.

Both active and passive skills are tied to specific weapons and are class-restricted, but using them enough times allows for them to be equipped and used as sub-class skills. Not only that, but classes only unlock after their corresponding weapon is obtained, so the exploration of Grant has major impact on the core tactical gameplay. Properly planning the party’s synergy regarding the appliable humours and their skills makes fights more manageable, but difficulty can be fine-tuned on the main menu as well. Normal difficulty seems to hit the spot just right, but easy and hard modes are available as well for players who want to just enjoy the story and lore, and those who wish for a more challenging experience respectively. The presence of a customizable difficulty option is worth noting, allowing to select or omit specific gameplay options and to increase or decrease the amount of experience and skill points obtained at every fight. 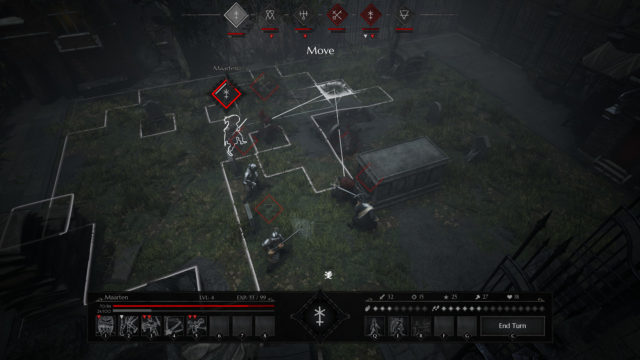 The turn order displayed on top of the screen allows for more accurate planning.

Warcave certainly has built solid foundations for Black Legend, with only a few missing quality-of-life improvements holding it back. The absence of a map is the most notable one, a feature that could be especially useful when retreading one’s steps to the Merchant Guild, the game’s main hub. The top-down tactical view during battle is very useful and allows for more precision, but it is sometimes hampered by the presence of trees and foliage that obstructs the player’s view. The shop UI seems to be missing useful features, like the amount of a given item in the player’s possession as well as the chance to buy an article in bulk.

Aside from minor wrinkles that can be ironed out, Black Legend shapes up to be a horror-tinged title able to satisfy both tactical RPG enthusiasts and newcomers. The game is slated for release in 2021 for PC, PlayStation 4, PlayStation 5, Xbox One, Xbox Series X, and Nintendo Switch.