Fly the Wind, It Will Take Me

Supergiant Games’ Bastion is one of the few games that many agree is close to perfection. Not only did it win our Game of the Year award back in 2011, but it’s a game that constantly comes back into conversation, frequently reflected on for being such a unique experience as a whole. It then seems strange that I am reviewing it four years later, replaying it on PlayStation 4. Admittedly, my feelings have not changed, if anything, Bastion has intensified my love for narrative exploration, making me wish more games out there felt like a complete package.

Bastion begins in a dreamy world that has been hit with a large scale transformation. The Kid, as he is affectionately referred to, is one of the only survivors left after the Calamity. Traversing through a world that builds as he moves, the Kid arrives at the Bastion, meeting another survivor named Rucks, who tasks him with rebuilding the world, finding cores that will hopefully revitalize the world. Unfortunately, as the Kid rebuilds the Bastion, its true purpose is revealed, causing a difficult choice that must be made.

While the main narrative may not seem like a lot at first, it’s one that builds gradually, never intentionally giving anything away. Logan Cunningham, the voice of Rucks, overlays the environments, and as the Kid explores he is constantly providing information in regards to the Calamity, the Bastion, but also commentating on what the player may be doing in that instance as well. With such a unique method of storytelling, Bastion is one of those games where the mystery unfolds slowly, purposefully, and nothing feels out of place. There are no cut scenes, everything unfurling as the player navigates the world, with the narrative slowly bridging together to its peak, and what a climax it is. While the game is short, clocking around seven hours start to finish, every piece of the puzzles fits perfectly, and is deliberately placed.

Outside of the narrative, everything in Bastion is purposeful and executed with incredible precision. The world of Caelonda, or rather what’s left of it, is amazing to explore. Every area builds as the Kid navigates through the areas, and as a Core is nabbed, falls apart at his feet. Everything in the areas can be destroyed, and the vibrancy of the visuals makes the players feel as though they are traversing through some twisted, beautiful dream. The choices in colour and level design make everything feel so alive in Bastion, with areas organically growing and disappearing. It makes exploration an interesting task on the player’s part, as it’s not always easy to know when the world may change under one’s feet. 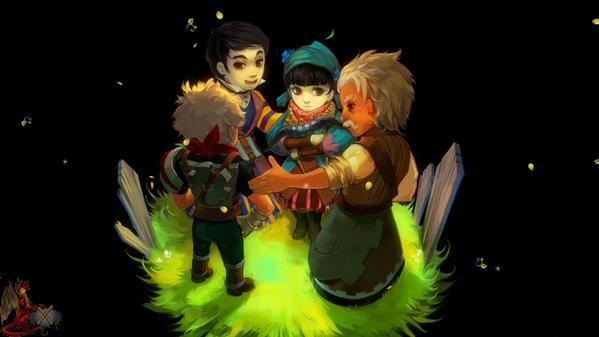 With a game that requires a ton of exploration comes the combat system that must accompany it. Borrowing from the brawler genre, the Kid can hold up to two weapons at a time and switch between them using the circle and square buttons, with a special skill mapped to R2. As the Kid searches every nook and cranny of each world, he is given a new weapon to master, from dual pistols, a rocket launcher, and even a giant hammer. If an Arsenal is found on the map, the Kid can swap out his weapons for something else. There’s a plethora of weapons avaliable, making Bastion one of those games where it’s great to experiment with weapon combinations to see what can be tailored to the player’s preferred playstyle. Some weapons are area specific, though the player is never entirely tied down to using them.

Furthermore, every weapon has a strength or weakness that is noticeable upon usage. For example the Army Carbine has a slow reload time, so it’s easy to be attacked by enemies who are throwing projectiles. However, the weapon’s strength is that it can one-shot the majority of such enemies if fully charged. It’s important to weigh the pros and cons of every weapon the Kid obtains as some have better perks than others. Still, it’s easy to get caught up in large firefights with groups of enemies. Utilizing the Kid’s evasion skills is imperative as not every enemy goes down with simple bashing. The Kid also comes equipped with a shield on the L2 button, which can deflect projectiles back at enemies. It’s easy to get overwhelmed by the number of enemies in an area, but game always gives the player a means to overcome it. If the Kid falls in combat, playing on the Normal setting, he will be given the option to retry from where he has fallen.

Customization of combat is also a huge part of Bastion. As the Kid rebuilds the Bastion, more areas of interest are opened up for the player to operate. The Arsenal allows for the Kid to change up his gear, while the Forge allows for upgrades for each piece of equipment. These two areas in particular have the greatest importance, because upgrading multiple armaments is essential to success in Bastion, as every weapon has a strength and weakness. Building the Distillery allows the Kid to apply bonuses such as an extra chance if he’s been defeated, or allowing for more health potions to be added to his belt. These bonuses can negate a lot of what the wilds in the Calamity will throw at the player. Weapons and booze can be changed any time the Kid is in the Bastion, and without a cost. 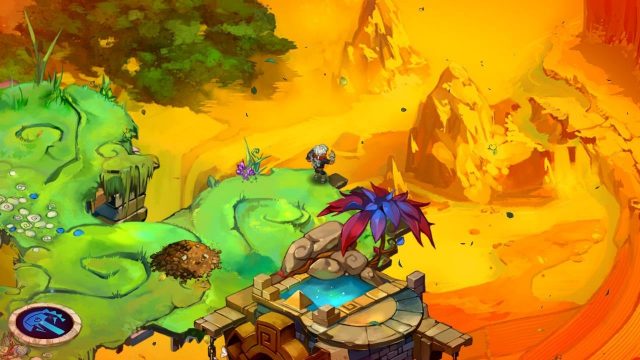 Crafting the world at your fingertips.

Bastion‘s approach to difficulty is a unique one. Although the player can start on No-Sweat Mode (aka Easy) or Normal, building the Shrine can allow players to ramp up the difficulty for themselves by applying idols in the Shrine, which can make for some real self-inflicted challenges. No-Sweat Mode is a new option in the PlayStation 4 version, which is accessible right at the beginning, unlike in the PC and Xbox 360 versions, where it was attached to The Stranger’s Dream DLC. This mode allows for the player to keep retrying in an area without feeling the pressure of receiving a game over. In fact, all the DLC is already embedded in the PlayStation 4 version, though opening Score Attack Mode and The Stranger’s Dream ‘Who Knows Where’ sequence can only be accessed once the game has been completed.

Although the main story is short, there’s a large amount of content in Bastion to enjoy. Proving Grounds allow players the opportunity to increase their proficiency with each of the eleven weapons present in the game, spawning a unique challenge that must be completed. There are also the ‘Who Knows Where’ sequences, which can be triggered when collecting special items in the world. These sequences have the Kid ploughing through waves of enemies, while also begin given narrative background to certain characters and who they were before the Calamity struck. Although these sections are not mandatory, they are very enjoyable, especially the ‘Who Knows Where’ sections as they provide more plot information, which are beautifully written and overlaying the chaos of the enemy waves.

Working with Bastion‘s unique approach to storytelling, its plethora of combat options and amazing presentation, the soundtrack provides a very memorable part of the experience. Darren Korb does a miraculous job of embedding his beautiful songs into the game, breathing life into every area and story element. From the wistful “Build That Wall,” which Zia sings upon her introduction, to “Mother, I’m Here,” which embodies Zulf’s personal feelings, every song feels strategically placed, evoking the right amount of emotion and tension in each area or scene. The soundtrack is delicious ear candy, and it’s easy to find one’s self humming along like Rucks during key moments.

There’s a reason why Bastion was the winner of our 2011 Game of the Year: every aspect of the game is beautifully thought out and developed. There’s a seamless harmony between the gameplay, narrative and presentation, something that is quite uncommon in many games. Playing Bastion is like being transported into a melancholic dream, one that has players stopping and questioning the world around them. If you’ve played Bastion before, this PlayStation 4 version is going to feel quite familiar, but those who have yet to experience this gem, it’s worth the price of admission. Bastion is an enticing experience, and one worthy of every accolade that it has received.