Asterigos: Curse of the Stars Review

Ancient Mythology For The Soul

When the budgets of indie developers get larger, more talented programmers can add presentational details for their games.  Acme Gamestudio pooled its resources into making an accessible third-person action RPG with Asterigos: Curse of the Stars.  This extra time and funding shows in the game’s lore, combat, and visual details as everything feels expansive.  Some aspects are rushed however, as enemy designs are re-used partway through and characters’ mouths don’t move during story scenes. These issues are minor, and the game balances all of its assets into an enjoyable adventure.

Asterigos: Curse of the Stars follows Hilda, a member of the Northwind Legion from the neighbouring kingdom of Anbari. She is sent to Aphes to search for her father Harold, the commander of the legion, to find a cure for the Asterigos curse that took hold of their king.  Aphes’ maladies are apparent as soon as the border is crossed, as the country has been operating under this curse for a thousand years.  This curse effectively makes all Aphesians immortal, as long as they continue to consume stardust from a substance known as Starite.  Starite is what every living being turned into as a result of the Asterigos curse.  It can also be mined from ore and distributed, but due to a caste system that places favour on the rich and aristocratic, many citizens have to kill animals and even each other to survive.

Aphes has three main powers vying for control, the remnants of the Aphesian military, the lawless bandit Waraxe, and the cult of Ethrus, whom use dark arts to turn into were-creatures.  Two camps appear to try to bring an end to Asterigos: the Adherants, who are led by Minerva and recruit Hilda to join their upstart movement, and Eumenides who partners with the rest of the Northwind Legion.  Eumenides is forced to join with the legion because he’s considered the catalyst for bringing the Asterigos curse to Aphes.  Since Aphesians do not age, get sick, or have the ability to reproduce, this makes the game a study on how immortality affects the sanity of individuals within the constraints of a broken caste society.  Introducing a talented dissonant individual like Hilda allows for a variety of ways to introduce hope, fear, and pain as Aphesians are shocked into deciding how to deal with their thousand year battle against sanity.  Players experience a lot of heartbreak as Hilda’s best intentions don’t always bring the happiest results in this bleak world. 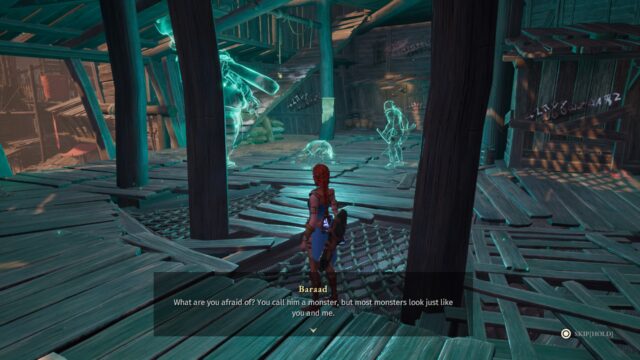 Even bandit leaders show compassion in some form as characters all share a lot of depth through their past.

Figuring out what happened in Aphes over the last one thousand years is a treat as holographic projections dish out bits of backstory in the near and far past, while documents are spread everywhere to explain more intimate stories behind many of the inhabitants in the city.  Every character is given the chance to run through their emotional arcs, but few will surprise with their main motivations.  This lends to a well crafted cast, with every character filling a roll and having interactions with others that are so much deeper than first expected.  Subtle clues in how NPCs will act can lead to consequences depending on the choices that players make during the quest.  This makes Hilda idealistic, but not perfect, as Aphesians have lived a long time with a yoke around their throat, and innocent lies, harsh truths, or even answers to unspoken questions can push anyone over the edge.

Side quests can take Hilda through many areas of Aphes, backtracking and searching through various areas with little clue about where to go.  Main quests are a bit more straightforward as each one takes place in a new area, with most paths leading to the boss.  With each quest’s completion Aphes becomes more interconnected since Hilda unlocks shortcuts during the missions that lead from new locations to old ones.  Crossing the entire city would take hours, so in the later game Hilda unlocks the ability to teleport freely between any unlocked conduit.  Conduits also double as checkpoints for when Hilda dies, as well as a place of rest that if used causes all defeated enemies to respawn.  Asterigos: Curse of the Stars is pretty lenient as when Hilda dies any progression made before death will be unlocked, with the drawback being a loss of ten percent of stardust, which Hilda uses as currency, and that regular enemies will respawn. 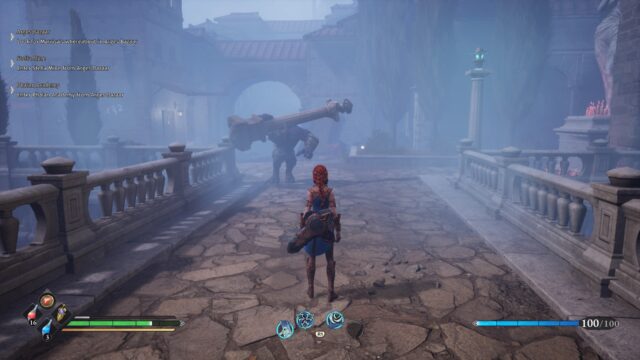 In the distance a were-minotaur sees our heroine and…hefts a lamppost to do battle with her.

While Hilda can run from frustrating enemies, it is far more beneficial to gain resources and experience from defeating them to make the next questline easier.  Hilda can use four elements to exploit weaknesses on cumbersome enemies, as well as six different weapons to equip and learn skills from.  Weapons have strengths and weaknesses and figuring out which combination of two to use at a time is a lot of fun at the beginning.  After testing them out and finding a pair of favourites, there’s no reason to swap between weapons later on.  Combat stays fresh with enemies having different attack patterns for Hilda to dodge, block, or parry as mastering how to take out each enemy feels like an accomplishment.  Weapons have a secondary function that is unique to it; for example, those wanting to block have to use the sword/shield combo weapon, while anyone who enjoys parrying has to use the spear.  Some weapons just double down on offence with powerful charged shots or setting traps.  Overall, combat is punishing and Hilda will die as players start new missions low-levelled for the area and have to deal with new enemy mechanics.  While frustrating, the game never feels unfair in its difficulty.  Salves to replenish health have to be found or purchased, but enemies telegraph their attacks to a point where they can all be timed with enough patience.

Levelling up in Asterigos: Curse of Stars will gain Hilda one or two attribute points to be delegated into three different attributes; attack power, health, or skill damage and action point recovery time, as well as a point to the skill tree.  The skill tree unlocks passive and active abilities for Hilda to use with each weapon, and some perks in general.  Skills use action points, but deal massive damage, to the point that a few big hits can turn any enemy into swiss cheese if high levelled enough.  Skills and passives can be equipped or unequipped at will, so if a boost that alters how dodge rolls work throws off timing, it can be swapped out, which allows for flexibility and customization in how Hilda plays.

Bosses are a major attraction to Asterigos: Curse of Stars, each main quest ends with one, with a few mini-bosses along the way.  Each one is a spectacle featuring various ways to use the environment and dishing out multiple attacks to keep players on their toes.  Getting to these bosses can be difficult as Hilda is often swarmed by mobs of regular enemies that can take large chunks of her health.  Thankfully, bosses have the virtue of being at the end of the dungeon, which players can prepare for.  Exploration is always rewarding, leading to every nook and cranny being searched and many enemies defeated.  Running around is also done out of necessity as quests, keys, and important progression items can be in obtuse locations, leading to a lot of backtracking.  Most of the frustrating backtracking is relegated to side quests, as main objectives will all be in the new area that has been unlocked. Memorization is important as there are no maps in the game meaning side quests need to be done immediately for fear of forgetting how each zone connects to one another. 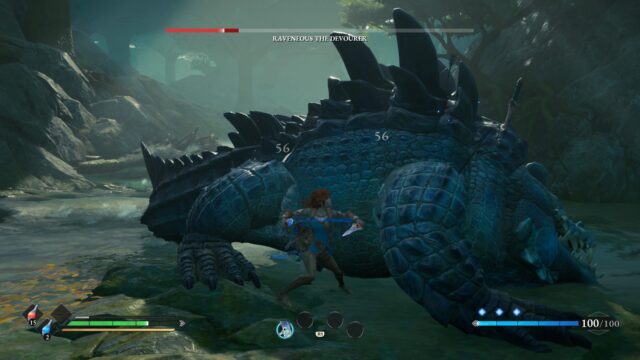 Sometimes bosses come at players in the form of crocodiles of unusual size.

Asterigos: Curse of Stars is a beautiful game, showcasing a lot of locations and monster designs that blend together in ways to make this a familiar yet distinct world.  These designs do get re-used, and locations tend to only be dark and foreboding.  Character designs are all simple, with members of each faction wearing similar clothing.  This makes the characterization of each person important as the voice acting and background lore help each character fit into their own spot in the world.  These great vocal characterizations are hindered by the lack of facial animation as characters are talking with only a directional head tilt to signify when one is talking to somebody.  Background music is slightly haunting to keep players on their toes, and mixes with the sound design well to create a few jumpy moments if players aren’t observant of where they are.  Music tracks can be collected and provide works of art that take orchestral accompaniment and blend in lyrics that feel as though they belong on an operatic stage that isn’t found elsewhere in the game.

The developers take a brutal and punishing game of survival and spin into an epic journey.  Hilda won’t become a beaten and battered casualty of a brutal combat system, but rather a heroic figure that brings hope to a bleak land and its people, with personal stories that have a variety of endings for the Aphesians in this fully fleshed out world.  A strong combat system that doesn’t punish players too harshly makes Asterigos: Curse of the Stars refreshing and approachable.  Levelling too much can make bosses easy, and locations for quest items can be obtuse, but the game never feels unfair or unbalanced making Aphes a world worth exploring for the rich adventure that it tells.