Ar tonelico II should remain a pleasant memory of the PlayStation 2 once it ascends to gamer Valhalla once and for all. Its key strengths are complex characters and an abundance of optional goals, but more remains to be said about both. Unfortunately, its numerous bugs and quality control issues suggest additional and less savory reasons for the game to be remembered.

The floating continent of Metafalss is in trouble. First of all, it isn’t even properly floating — it’s attached to a giant tower sticking out of the Sea of Death. Secondly, it’s an ideological battleground, split between the fascist Grand Bell government and the deposed supporters of the Goddess. While the two forces clash, specially gifted women with access to Song Magic, called Revytails, begin to suffer a mysterious curse from the Goddess in increasing numbers. Bland-but-dependable knight Croix Bartel is thrust into the thick of things when asked to investigate a routine Revytail outbreak. As usual, everything is not as it appears, and soon he is embroiled in a quest to save the continent… and understand his own heart. The grand, overarching story is bolstered by Croix’s personal story — or to be more precise, the stories of the Revytails who potentially grow to love him.

Although Croix is as boring as plain toast, he spends a lot of time wooing the ladies through several interlocking dating mini-games. To unleash the true potential of his Reyvateil companions’ Song Magic, Croix dives inside their minds and engages in metaphoric therapy. As each Revytail solves her inner conflict, she gains a closer emotional bond with Croix. These emotions blossom into love if the player allows it, albeit one that is constantly hounded by the tropes of comedy anime. Those who cannot stand bad-cooking jokes will probably rate the game several points lower than this reviewer.

Shifting alliances and morally ambiguous characters make it difficult to understand what’s going on in the main plot at times, but everything is revealed in the end. The story is willing to take risks with fundamental RPG tropes, so the occasional oddity or misstep doesn’t detract much from the game. Several of the key characters would benefit from further development, for example, but it’s hard to fault for their lack in the face of the characterization of the two primary heroines. Despite being a dating game with a male hero (whose ultimate attack loudly evokes “maximum penetration,) the rivalry/relationship between Luca and Cloche, the primary two Revytails, has enough moving parts to qualify Ar tonelico II to pass the Bechdel Test. 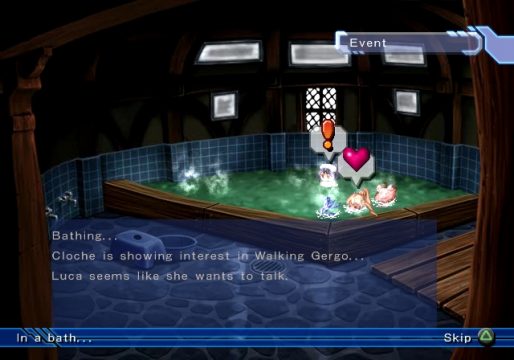 One result of characters who are constantly talking is what is known as “decompression” in the comic book world. This phenomenon occurs when simple conversations are extended without necessarily introducing new material. This is most notable in Ar tonelico II through the use of repetitive information and flashbacks to recent events. The effect is not entirely a bust, however; it provides characters extra time to interact with one another. As a result, their eventual growth and changing feelings toward one another are believable. It also suggests that a leisurely pace for playing the game is best. Instead of rushing through and farming synthesis recipes, its everyday conversations evoke the commonplace routine of waking up in the morning, taking a slow soak in the hot springs, and being surprised when the world suddenly shifts around a plot point.

Speaking of hot springs, the core Reyvateils gain experience by taking baths together. They also hold mid-bath conversations that increase their synchronity level, allowing them to more effectively summon powerful chain magic come battle time. Bathtime fun does not end there, however. Different bath gels and toys can be added to the hot springs for various special effects. Afterward, the Revytails can be clothed in various unlockable costumes such as schoolgirl, magical girl, and maid with uzis. I think you see where I’m going with this. Ar tonelico II wears its T-rating with pride, indulging in language, partial nudity, and suggestive themes that would not be out of place in a Working Designs title. It’s impossible to ignore the stream of “dive”, “insertion”, and “penetration” double-entendres, but they surprisingly do not detract from the story. At moments, they even enhance the narrative, allowing the characters to confront legitimate sexual concerns, swaddled with a protective layer of metaphor. Sometimes though, they’re just jokes about breasts and penises.

Ar tonelico II isn’t just about visual novel chatter and dirty jokes. Songs are a reoccurring motif throughout the game, and musical imagery pervades Metafalss. As a result, the Gust sound team plays a strong role in shaping the game’s final presentation. The game’s most striking songs are its magical hymns, which blend various subgenres of electronica with world instruments and soaring vocals. The background tracks are less impressive, but still present enough catchy hooks to keep them memorable in spite of their constant repetition. English and Japanese voice acting is present for all major scenes as well as during battle. Neither tracks are overly exceptional, but it’s a strong plus having both available in the first place.

The combat system is surprisingly robust, making random battles fun for most of the game. The basic set-up consists of an attack phase and a defend phase. During the attack phase, the two characters in the front of the party have access to three types of basic physical attacks. Fulfilling the right combination of attacks increases the attackers’ bonds with the Revytails positioned in the second rank, allowing access to higher powered attacks and secret moves. Each front-rank attack is also keyed to one of three meters that influences which type of magic the Revytails can cast: burst, harmonics, or psyche. Revytails also cast spells independently of their defenders as their burst gauge slowly rises. The defense phase takes the style of a Super Mario RPG or Mother 3-style rhythm game where every enemy attack targets one or both of the party’s active Revytails. It’s up to the player to time button pushes (with the help of a handy indicator gauge) so that the generally beefy defenders will leap in front of the slender songstresses. Varying degrees of correctness mitigate or completely negate damage. The end result is that every battle becomes a juggling act between charging up high level attacks, accessing magic-boosting subsystems, balancing spells, and defending against enemy attacks.

Despite its overall fun, the battle system is far from perfect. Busy, multi-hit attacks regularly cause system slowdown. This is merely annoying when applied to ally attacks, but a legitimate problem when enemies flood the screen with teddy bears and elemental storms. As the projectiles grind the system to a crawl, the timing required to defend against each attack hangs and falls offbeat. Also, by the end of the game, most of the bells and whistles will be unnecessary to survive. Once the player is able to plow through every fight, the novelty falls prey to the standard RPG grind. 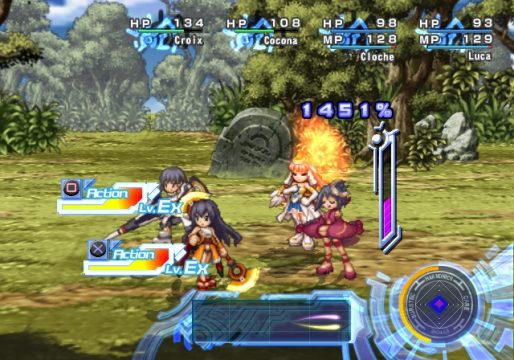 On older standard definition TVs, text on the status screen will likely be so compressed as to be headache inducing. This is a shame because the in-game dictionary contains a wealth of enjoyable, unnecessary information. Along with humorous item descriptions, the game tracks monster statistics, character bios, and descriptions of the members of Cloche’s fan club. Character sprites experience the same fuzziness. The occasional animated cut scenes fare much better, but their presence is rare.

The largest flaws with Ar tonelico II are its glitches and localization issues, large and small. The most game-breaking is a freeze that automatically occurs during the third round of one of the final battles. The only way to bypass it is to defeat the boss before the unofficial time limit occurs. This glitch is also present in optional battles with the same character, making it difficult to take advantage of the game’s auxiliary content. Apart from the major freeze, the game also suffers from enough unexplained lock-ups that they are not an isolated issue. Furthermore, several sections of dialogue, such as during Dive Therapy, read as stilted or confusing. Other sections lack even basic grammar proofs. These script oversights still manage to communicate the tone of each scene, but at the expense of greater story immersion. One of the most indicative examples of editorial oversight is a frequently repeated scene that presents the player with a line of the original Japanese text for no apparent reason. It is followed immediately by English text and occurs without comment.

In spite of these notable missteps, Ar tonelico II is eminently playable, even for RPGamers who missed the first installment in the series. While the bugs and slowdowns were constant companions, this reviewer was able to look past them for the personality underneath; others may not be as forgiving. There’s plenty to do, and enough to experience through the characters, music, and battle system to provide a strong lure to slog through the worst of it. Although the game completion time is listed as 40-60 hours, this number doesn’t take the two-branched story or four endings into account. It’s worth playing once as well as a second time, but probably not back-to-back. They say that time heals all wounds and absence makes the heart grow fonder, after all.