Symptoms Include Pyromania and General Hostility

Since the day H.G. Wells’s “The War of the Worlds“ was broadcast over the radio, inducing mass panic across an entire country of gullible bumpkins, alien attacks have been something of a staple in the sci-fi/action/horror genre. Whether it’s the Governator going round for round with a vicious predator in the jungle, or Sigourney Weaver cuddling up nice and close to a flesh-eating, acid-spitting monster, man vs. alien is a common theme in virtually every medium that human-kind has developed. Back in the ’80’s, when many of we RPGamers were but tots and Super Mario Bros. was the height of graphical perfection, an arcade game by the name of Alien Syndrome was making its rounds. Featuring fast, furious, alien-blasting action, it was a game many a greasy teenager spent weekends pumping quarters into. Sega, twenty years later, has dredged this ancient beacon of alien obliteration from its grave, and redesigned it for the Wii.

While Alien Syndrome pretends to have a story, for the most part it can simply be ignored. It’s not terribly interesting, or particularly well developed, as in general you’ll see perhaps one or two lines of dialogue in each of its forty levels. Alien Syndrome tells the tale of Aileen Harding, a soldier who begins the game by exploring a derelict spaceship on a search for survivors. From there, the plot plods along as it takes you through a series of very similar looking locations, including a space station, a recently terraformed planet, an alien mother ship, and an alien home world, with almost the entire story being told through conversation snippets between Aileen and her commander over the radio. 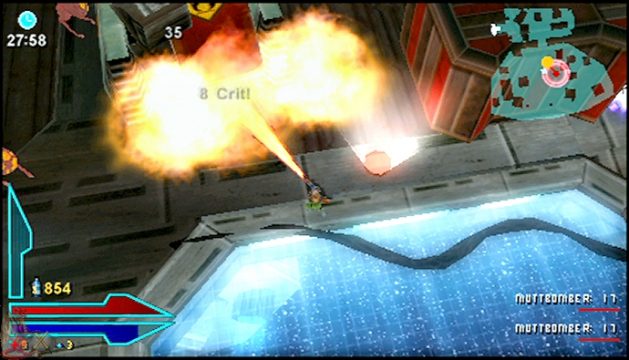 Remember kids! Only you can prevent forest fires!

It’s very difficult to care about the characters or plot of the story, but Alien Syndrome, at heart, isn’t really anything more than a simple dungeon crawler. In that regard it manages to succeed very well, despite the poor storytelling. The gameplay is fast and frenzied and the controls are intuitive and amazingly responsive. Blasting aliens away over and over does tend to get a little repetitive, but that is the mark of the dungeon crawler, after all. The repetition is stayed somewhat by giving the player five class options, which focus on the five different weapon types: melee, explosives, flamethrowers, projectile, and lasers. In addition, the game throws new types of enemies at you at a fairly consistent pace, though a fair bit of palette swapping does go on.

As you kill aliens (and you will kill a lot of aliens), Aileen gains experience and levels up. With every level comes two points to distribute to your four basic statistics and one point to put towards a proficiency, which are used to improve your weapon damage, equip more powerful weapons and armor, improve your resistances, and a number of other options. Your class choice determines your starting statistics and proficiences, but from there the way you proceed is really entirely up to you, although the game does give you the option of automatically distributing points according to your class. Aileen is also accompanied by a robotic companion called the SCARAB, with which you can scrap the junk loot you acquire. The SCARAB can use these to create new equipment and ammo for you.

Combat is a very simple affair. The camera looks down on the action in a top-down perspective, while the Wii remote is used to aim. The analog stick on the Nunchaku attachment moves your character, and the B and A buttons are used to fire your primary and secondary weapons. By pressing down on the control pad, melee mode is activated, which causes the aiming reticle to disappear but enables a number of new motions. Simple combo attacks can be performed with the B button, while slashing sideways with the Wii remote triggers a more powerful attack. Slashing downwards performs a hammer blow, thrusting forward stabs in front of you, and spinning the remote in a circle causes a powerful spinning attack. If an enemy is near death, signaled by a ring glowing around it, raising the Wii remote and Nunchaku up and then bringing them down will cause a powerful finisher that restores health.

While melee combat offers a lot of options, the controls are not nearly as intuitive or as responsive as those for ranged weapons. Also, because hordes of enemies will often be coming at you seemingly nonstop, being able to beat them back from a distance offers significant tactical advantages as well. The weapons available to ranged combat are also more varied and distinct, leaving melee better as a last resort, should you run out of ammo. 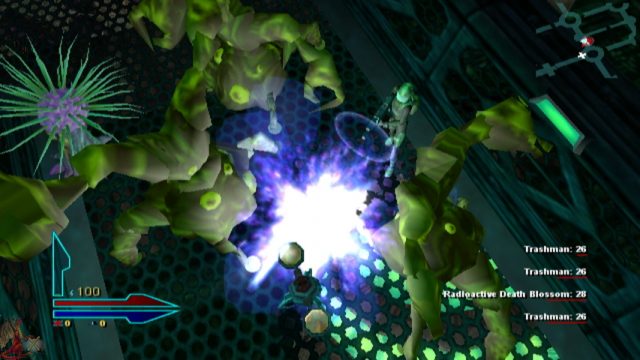 Despite its repetitive nature, going around blasting aliens is a lot of fun. One of the few problems, unfortunately, is that defeating some of the later bosses depends heavily on being able to dish out a ton of damage ridiculously quickly, and if you haven’t gained the proficiency to use the highest level weapons (unlikely, but possible), or if you simply don’t happen to have one of those weapons, there is virtually no chance of winning.

In the visuals department, Alien Syndrome is about as pleasant to look at as dog food is to eat. Not only is the art style drab, boring, and lacking variance, but the graphics are lackluster on the technical side as well. They get the job done, but that’s about it. Sound isn’t any better. Music is simple and forgettable, and the sound effects are loud, obnoxious, and irritating. There also seems to be a bug (or a lazy programmer) that causes sound effects to remain at full volume until you’re no longer in range of hearing them, at which point they stop suddenly. It can get particularly irritating in some areas where machinery and enemies on the other side of a wall blare loudly, despite several intervening layers of metal or concrete.

To be blunt: Alien Syndrome is not a great game. It’s not even a good game, really. It has a lot of problems, both technical and aesthetic, but as a simple dungeon crawler, it manages to succeed in being entertaining, even enjoyable. Much like Diablo II, Alien Syndrome features three difficulty levels, each of which must be conquered in order to unlock the next, with each successive one being designed for characters that have beaten the previous. It also features four-player simultaneous co-op on a single screen, and its intuitive but repetitive gameplay makes it ideal for short stints with friends. For the most part Alien Syndrome is a fairly easy game, though a few levels can be rather difficult. Game time clocks in at around twenty-five hours, but that can easily be extended should you choose to proceed through the higher difficulty levels.

Alien Syndrome is not for everyone. Anyone looking for an exciting story, memorable characters, or an original locale should definitely look elsewhere, probably at the polar end of the spectrum. Anyone looking for a fast, fun dungeon crawler to whittle away a few hours with every now and then, or even just something to play with a few friends, could do a lot worse.