The combat is more engaging than ever, pushing the player to simultaneous be more proactive and reactive to gain access to their full suite of abilities.

Team Ninja is on a roll. Ever since Nioh arrived in 2017, the company’s brand of action RPGs has been delivering with consistently good results. Ready to supply another challenging title into that space, Wo Long: Fallen Dynasty sees the developer looking to further refine its core gameplay systems, while exploring a new setting in that of a fantastical Three Kingdoms China. An advanced look at the game’s opening two levels shows that there’s a lot that will feel very familiar to those who have played its recent titles; however, the changes that are present point to tightly-focused and engaging combat system.

Wo Long begins with a trip to a surprisingly robust character creator before dropping players into the middle of a city under siege. While it doesn’t take a long time to get to the action, there wasn’t any onboarding for those who are unfamiliar with the historical period, with the sole plot hook being a mysterious evil wizard stealing a dragon spirit moments after its introduction. Not helping matters is the game’s English voice acting, which feels distinctly of the PlayStation 2 era. Cutscenes aren’t an overly pronounced element of the game, but when they pop the character’s trend more toward Saturday morning cartoon than dark fantasy. 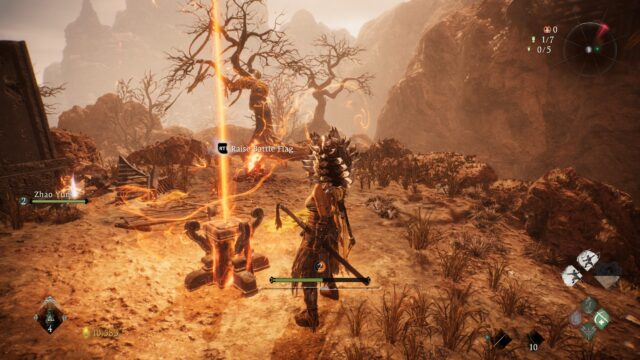 Battle Flags serve as Wo Long’s bonfire equivalent but with additional mechanical incentives to finding them.

When the player does get control it feels typical of a Team Ninja action RPG, quick and snappy, with the addition of a jump button. Jumping isn’t the most precise, but most of the platforming is generous and it allows players to clamber up the edges of appropriate surfaces. The addition of a jump button adds some variety to the levels and more opportunities to promote exploration, but the game’s busy set design can obfuscate the available paths. Even with jumping paths being marked by white paint, it’s easy to end up circling the map a few times looking for the way forward.

The biggest change to the formula comes with the combat, which has been redesigned around a new element called the Spirit Gauge. The Spirit Gauge is a meter, split into two halves, that increases and decreases depending on the flow of combat. Light Attacks and successful deflections will increase this gauge, while getting hit and spamming deflections will decrease it. If the meter ever is fully depleted, then the player’s stance is broken and they are susceptible to a Fatal Strike, a critical hit that deals heavy damage. Enemies have the same meter that follows the same rules. Complicating matters is that using special abilities eats into this meter, bringing the player closer to a stance break. This creates an interesting push and pull to the combat where keeping the meter further to the positive side allows for more frequent uses of spells and special attacks. This does require pretty consistent use of deflecting, which gets its own dedicated button to reflect its importance. It comes at the cost of requiring a higher level of fluency from the player, but Team Ninja’s brand of combat is more engaging than ever here, pushing the player into being both proactive and reactive in order to gain access to their full suite of abilities. 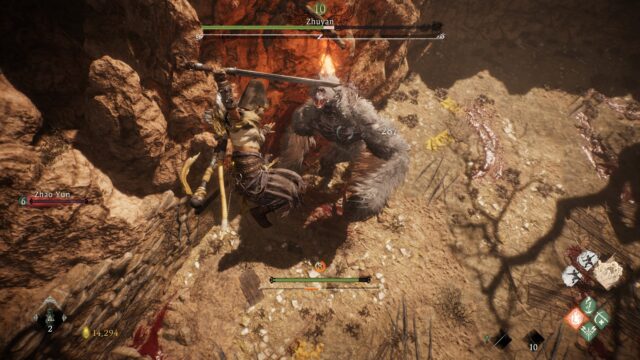 Mastery of the combat will more frequently reward the player with stylish Fatal Strikes.

The other distinctive gameplay feature is Morale. The player and all enemies have a Morale Rank, which represents their general strength in each mission. For the player this increases as enemies are defeated, but for enemies it mostly remains static, creating a general power curve for the mission. Dying decreases Morale Rank but never below the player’s Fortitude, a number set by the number of Battle and Marking Flags. Battle Flags act as the game’s checkpoints, restoring health and healing items as well as respawning enemies, while Marking Flags give an additional incentive for exploration, found off the beaten path or guarded by difficult enemies, with their activation making the stage and its enemies easier. The one element to it that seems superfluous is the game’s Revenge and Rechallenge system. An enemy that defeats the player has their Morale Rank increased by one, making them more difficult until they are defeated. This doesn’t stack, so the enemy won’t get progressively stronger the more it beats the player, meaning it’s not really something that causes any actual concern. It does leave brute forcing by grinding out more enemies to get their Morale Rank up as a potential option for those struggling with a particular challenge.

Wo Long has bespoke stats, but players do not directly level them up. Instead, they invest in five virtues: Wood, Fire, Earth, Metal, and Water. Each of these governs multiple stats; for example, Water improves a player’s stealth and decreases how much Spirit it costs to deflect, while Earth increases the available equipment load and how much Spirit is gained from a successful deflection. These stats also tie into different kinds of weapons and, more interestingly, spells. Each virtue has its own spell tree, making spells an important part of any build’s repertoire. Higher levels spells naturally have stat requirements and cost Spirit to cast, but also require a certain Morale Rank, making finding Flags in the level an even more important part of exploration. This also has the effect of giving each stage its own a mini-crescendo, as higher level spells become accessible the further along in a stage. It’s a neat twist on how spell casting works and helps make up for the reduction of choice in leveling up. 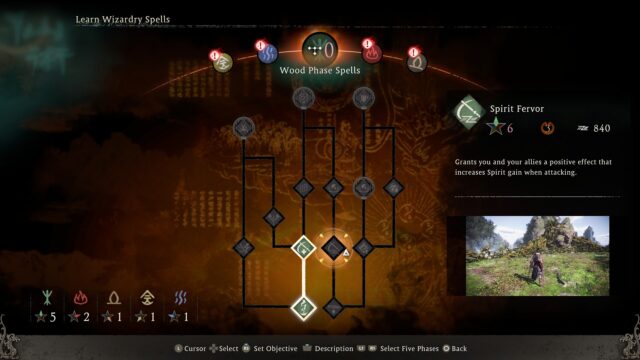 Each virtue having a distinct flavor of spell casting helps to further differentiate the sorts of builds possible.

The present difficulty in Wo Long is far from a cakewalk but after a short struggle grappling with the system changes the game’s combat and exploration became much more manageable and enjoyable. The first boss proved to be an initial wall but once he was overcome, any subsequent fights were considerable easier to manage. It remains to be seen if the game will have the same level of breadth as the Nioh series, but it already feels better to control. The build ran competently on a GPU falling just under its recommended specs. The cutscenes and character models have a stiffness to them, suggesting that the gameplay has been the primary focus, but so far that prioritisation has paid off. Wo Long should be an interesting upcoming option for any action RPG fan.