Major new characters include Fleur, Al, Glace, and A.J.. Fleur is a Muse that Fang and company encounter in their fight against the Dorfa corporation. Her songs are said to grant the ability to heal wounds or even brainwash others, though she knows little about the world in general. She partners with Al, who she treats as her father. Al is scientific, knowledgable, and easygoing, but can frequently get lost in things that interest him. 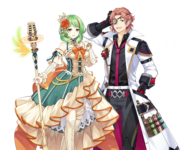 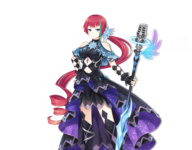 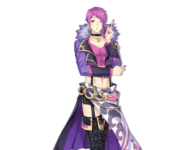 Glace is another Muse that party encounters whose songs can brainwash people and alter their memories. She is working for Dorfa to collect Furies for her “master”. Finally, A.J. is a character whose role is unclear, but they appreciate beauty and enjoy gossip. Despite their gaudy appearance, they like cooking healthy and modest Japanese-style food. Other new characters are Ibfreet, Sui, Rinne, and Lenne, while characters confirmed to be returning are Fang, Eryn, Tiara, Cui, Harley, Bahus, Galdo, Marissa, Ethel, Karin, Sherman, and Ryushin.

Fairy Fencer F: Refrain Chord is developed by Compile Heart and Sting, and uses a new tactical combat system that makes use of elevation difference and character direction as well as the previous titles’ Fairize system. The game, which launched in Japan in September 2022, will be available for PC, PlayStation 4, PlayStation 5, and Nintendo Switch in spring 2023. Standard physical editions will be available to pre-order from selected retailers soon, with a Limited Edition to be available from Idea Factory International’s online stores in North America and Europe.