The Dragoness: Command of the Flame Interview

PQube and Crazy Goat Games’ The Dragoness: Command of the Flame is billed as a modern take on Heroes of Might & Magic’s exploration, city-building, and turn-based combat alongside a roguelite twist. RPGamer was given the opportunity to talk to Crazy Goat Games’s Janina Wojciechowska and Maciej Struzyna about the game, including its inspirations and mechanics. This article is based on an audio interview, with some edits for clarity and conciseness.

Alex Fuller & Johnathan Stringer (RPGamer): Can you give an overview of the main ideas behind The Dragoness: Command of the Flame?

Janina Wojciechowska (Crazy Goat Games): The main thing is the strategy, the story, and the immersion in the world. Something that I hoped to capture was the feeling of traversing the unknown world.

RPGamer: The Heroes of Might & Magic inspirations are clear, are there any particular entries in the series that inspired the game?

Maciej Struzyna (Crazy Goat Games): It’s a big question for me. I started my game development adventure with Heroes of Might & Magic III as something that lured me into the industry. So for me it was always a dream to create something inspired by the genre. We started with HoMM3 as the basic idea for the game, like the fantasy world, turn-based tactics, and hero evolution within each campaign. We also thought about changes — I don’t want to say something against Heroes of Might & Magic because it has some of the best games ever — but to make it a bit more modern and adjust it to current lifestyles with some twists on the mechanics. 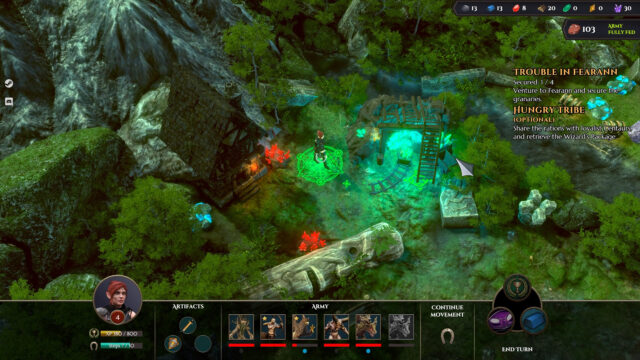 RPGamer: Are there any inspirations from other titles or series?

Maciej: Yes, there is also King’s Bounty, which is close to our hearts, so we tried to mix them a little bit. I don’t think we have any other direct inspirations.

RPGamer: Can you provide any details on the roguelite twist in the game?

Janina: The roguelite elements mean you can get a different loadout for your hero each time they set out. When you play the game, you will see the maps and quests, but every time you take a quest you can approach it from a different angle based on your hero and loadout at the start of each campaign. You can get some resources from the map with the chosen hero, go back to the city, and decide your progression and upgrades there. It’s definitely on the -lite side. If you get defeated by losing the last monster in your army, you get a choice of going back to the city or loading a previous save.

RPGamer: How do the campaigns and story work together?

Janina: During the campaign you progress the main story, where certain things happen that I won’t spoil. You learn more about the world and characters, and along the way you unlock more stuff, meet more monsters, and expand that way.

RPGamer: How are the maps created?

Janina: Every map is hand-designed by us, so we know what to expect. It gives us the additional bonus that each map is unique and has the crafted experience for the player. 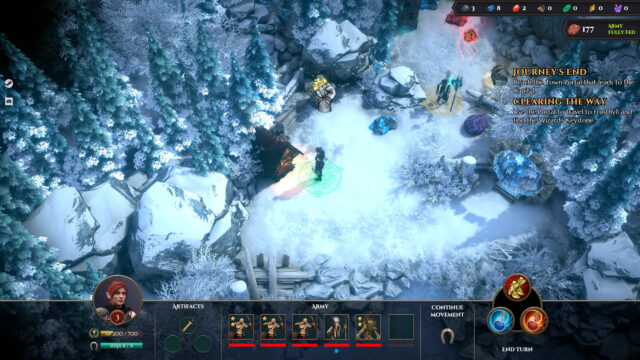 RPGamer: What was behind the decision to have single HP-based units rather than stacks of soldiers?

Maciej: As I said, we listed some things we wanted to change a little bit from HoMM, and this was one of them. The idea here was not to make the army of the player too strong at the end of each scenario, which was something very common in Heroes of Might & Magic. We found having single monsters that can advance a little bit, along with a cap on the might of the player army, means the last battles are interesting and it’s crucial for the player to play them well.

RPGamer: Ranged units are often quite overpowered in these games, is there anything you’ve done to balance these?

Janina: This is interesting because we got feedback that the ranged units are not as powerful, so we’ve made some steps into making them a more viable choice. We want every choice to be viable, but especially ranged because I personally like playing as a ranged unit. But I believe we’ve got the balance for the power as we have two steps determining the power of each ranged unit. The way we’ve done it and managed them properly allowed us to balance it between just standing and shooting the enemy to death or not having them viable at all.

RPGamer: How many factions or unit types are there?

Janina: Factions aren’t the same as they work in Heroes of Might & Magic. You have four main types of unit grouped by their home biomes. We have forest units that dwell in the woods, the frost units that live in the high mounts and stony areas, and the desert units in the fiery and scorched zones. At this point we have over forty monsters for players to use.

RPGamer: Can you go into a bit of detail about the story premise and the player’s situation in the game?

Janina: It’s tough to answer without spoiling something. The world is high fantasy with the main character being an elf with a pangolin as their companion. The story overall is about reclaiming a kingdom that was lost with the forces of the Dragoness, who is the main mission giver and commander in the game. Players are the commander of those armies, looking to bring the kingdom back together. At some point, it becomes clear that the player character also has their own reason for needing to restore the kingdom. 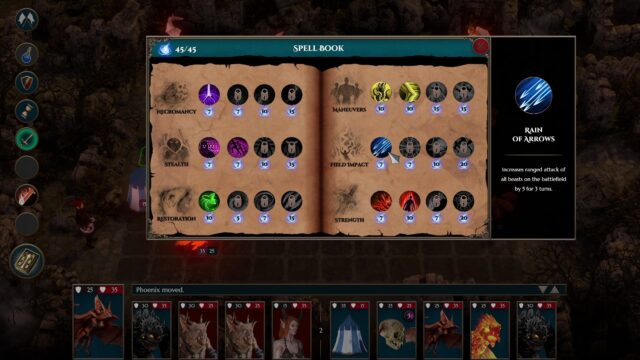 RPGamer: Can you talk a bit about the hero progression system?

Janina: There are two progression systems for the main hero. One is used on each map, where you gain levels from experience and gain skills form levelling up. The way you choose your skills determines how your hero fights. There is limited experience on each map so those choices determine whether you end up focusing on powering up your monsters, your magic, or a mixture of both. The second system is the city-based and is the one that is for initial loadouts where players can strengthen their hero and their starting state.

RPGamer: Are there any plans to release the game on consoles?

Maciej: At the moment it’s a PC-only, but if there are any opportunities then we’ll think about them of course.

RPGamer: Is there any part of the game that you’re particular proud of at the moment?

Janina: I have one map I love with my heart but it’s too hard to talk about it without spoilers. One thing I really love is that we have the pangolin as the companion. It came about when we were talking about and designing the characters. We were looking for a character that was somewhat submissive to the Dragoness and when we saw the image of a pangolin [standing with front paws raised] we immediately said we need it in the game.

RPGamer: Are there any things that you’ve tried to build on top of the traditional Heroes of Magic & Magic systems?

Maciej: There are a couple of things that are a little bit different, but I hope players will like them. One is that each map and scenario is unique. This isn’t just another random map to beat, there’s always an idea behind each map and they’re all a little bit different. If you find a map boring let us know, because it was one of our goals not to have players simply use the same approach and army. 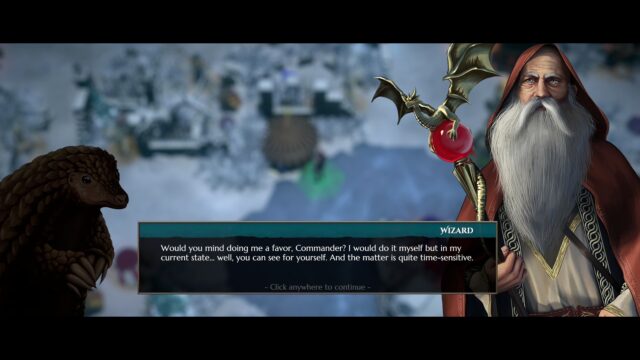 RPGamer: Can you give a couple of examples on how the maps or objectives vary?

Janina: You might have a movement ability that lets you move a certain amount of steps, one map might say you can’t use that ability there. Other maps incorporate some very light tower-defence elements or require you to claim something. Sometimes you’ll have interesting decisions like how many steps to use, which order to take enemies on, or maybe having branching paths to choose.

RPGamer: Are there any specific goals behind the art and sound design?

Janina: For the art design we wanted to capture the high fantasy, Tolkeinish style that is prevalent in fantasy media across the world. I’m a big fan of high fantasy as a theme. We have the trees, ancient debris, and high fantasy monsters, as well as the environments and buildings. That same philosophy applies to the music, which was inspired a bit by Heroes of Might & Magic, but we wanted to make it fit our world. It not only fits high fantasy, but also the four regions of the game.

RPGamer: How challenging was it to bring Heroes of Might & Magic into a more modern gameplay style?

Maciej: When I think modern, I think about myself as a player. I’m 20-25 years older and, for example, you can hear my kid in the background. I changed as a player and the industry changed. While we have these inspirational games from the past, we had to change bits. One thing we have in the game is that you can turn it off at any point in the map, even mid-turn and it will continue from that spot. For me, it was very important because sometimes I need to rapidly exit a game and do stuff because I’m a father, for example.

From the smaller things to the things like having a story and doing a twist on every map, we have a lot of elements that we say are “modernised” but are tweaks to be interesting in a different way to Might & Magic. I’m not sure if it was hard; it was easy to come up with them, but it has harder to make them.

RPGamer would like to extend our deepest thanks to Janina Wojciechowska and Maciej Struzyna for taking the time to answer our questions, and to PQube for setting up the interview. The Dragoness: Command of the Flame launches for PC on September 1, 2022. A demo is currently available to try out on Steam.