Atlus provided details on the editions for the upcoming Soul Hackers 2. The game will be available in a Digital Deluxe Edition that includes the game, the “Money, Incense, and EXP All-in-One” DLC, and the “Lost Numbers” additional scenario DLC. There will also be a Digital Premium Edition that includes the Deluxe Edition contents plus the “Costumes and BGM All-in-One”, “Demons All-in-One”, and “Ai-Ho” DLC. Pre-orders will receive a Persona 5 costume and background music DLC set. In addition, North America will receive a physical Collector’s Edition that contains:

Atlus is encouraging those interested to sign up for the newsletter through the game’s official website to learn pre-order details. However, multiple outlets are reporting that it will be available for $199.99 exclusively through Shop Atlus from 1pm Eastern on June 10, 2022.

The edition details came alongside the third official trailer for the game. The three-minute video, in Japanese with English subtitles available, primarily focuses on Soul Hackers 2′s story events, dotted with a few gameplay snippets. Soul Hackers 2 is a new title in Shin Megami Tensei’s Devil Summoner spin-off series and is set in a world where certain people are able to command demons to fight using customisable devices called COMPs. The game is being developed for PC, PlayStation 4, PlayStation 5, Xbox One, and Xbox Series X|S and is planned to release in Japan on August 25, 2022, and in North America and Europe on August 26, 2022. 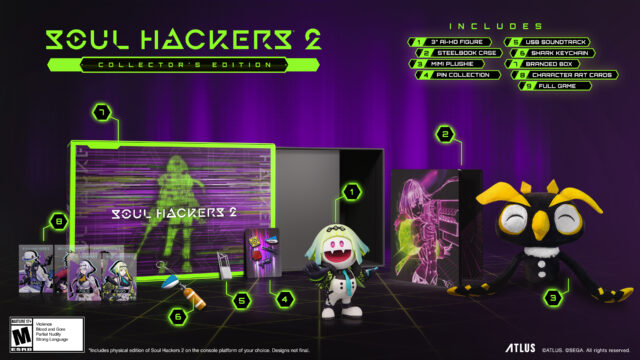