For those curious about leaping into Tamriel, the release of High Isle feels like a good time to do so.

MMORPG The Elder Scrolls Online is still going strong eight years afters its initial launch, and ZeniMax Online Studios has found an effective annual cycle to release new content, devoting updates to a particular storyline and locale. 2022’s Legacy of the Bretons content focuses on the Systres Archipelago, with its biggest release coming in the High Isle expansion. RPGamer was able to get access to a preview build of High Isle, taking it on from the perspective of an The Elder Scrolls Online newcomer.

For newcomers, it’s worth detailing The Elder Scrolls Online’s approach to its storylines and balancing. Rather than having a single connected storyline, the game is largely divided into independent major chapters associated with the base game and each of its subsequent expansions. New players will have access to all of this content from the start with the $59.99 Collection bundle, and since June 2021, the game has had a single unified tutorial that leads them to the Keywright’s Gallery. The area of portals lets players pick where they wish to start, whether it be the base game or one of its expansions. Once players have chosen an initial destination, they are free to tackle the story quests and locations they have access to in whatever order, allowing them to flip back and forth mid-way through if they wish.

To allow this, the game includes its own scaling system, though rather than adapting enemies to the player’s level, it boosts players’ power to level 50, which may provide some surprises when newcomer see their level one attributes. As players level up, the boost received reduces until the point where it is removed entirely. Despite removing one of the RPG facades with this, The Elder Scrolls Online manages to keep a sense of the player growing in power thanks to how they unlock and power-up abilities and spells, with higher level equipment also marked as being more powerful. There’s still a sense of achievement in levelling up, even if it might not impact how tough foes are. General enemies in The Elder Scrolls Online are pushovers on their own, though this feels more like an underscore that exploration is the primary appeal of the series. It doesn’t have the series’ more playful trappings of messing with NPCs or messing with physics and the vast array of incidental items, but during the exploration and virtually all of the content I was able to check out during the preview, it very much feels right at home as a very single-player-friendly experience. 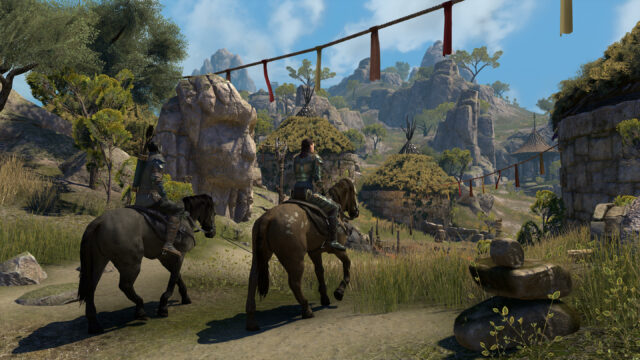 High Isle has a strong medieval western Europe feel to it.

Anyone familiar with recent The Elder Scrolls titles will know exactly what they’re getting with the game’s combat. Players can fight in first- or third-person — first-person is easier to aim though more difficult to judge any surrounding threats — as they face off against foes and do a mixture of attacks, blocks, or dodges as required, using other skills that draw on magic or stamina. Stealth can help gain the upper hand, though once a fight does break out, it is a largely chaotic affair. Though regular enemies are easy to swipe down, boss fights are still appropriately challenging and will force players to have a plan and react to the bosses’ abilities.

High Isle focuses largely on two major islands: High Isle and Amenos. High Isle is home to the most of the nobles around the Systres Archipelago. It has very much a medieval European feel to it, with temperate to Mediterranean scenery, including castles and druid villages. There are plenty of underground caverns and ruins to explore, most of which come about as part of quests. Meanwhile, Amenos has effectively devolved to a prison island, although I can’t speak further to Amenos since I didn’t get to spend any time there during the preview period.

The expansion’s story focuses on an attempted peace conference between Tamriel’s three major factions, all vying to claim dominion over Tamriel (in a time period roughly 1,000 years before Skyrim and 800 years before Morrowind and Oblivion). However, a new group dubbed the Ascendant Order has wreaked havoc with the plans for those talks, set up by Lady Arabelle Davaux and the Society of the Steadfast, causing the ship carrying VIPs to disappear. Although claiming to act in the interest of the common people forced into the machinations of those in power, the Ascendant Order’s methods and secrecy clearly indicate some nefarious goals of its own, and the player is tasked with assisting Arabelle and her allies’ with shedding light on the situation and finding the VIPs. 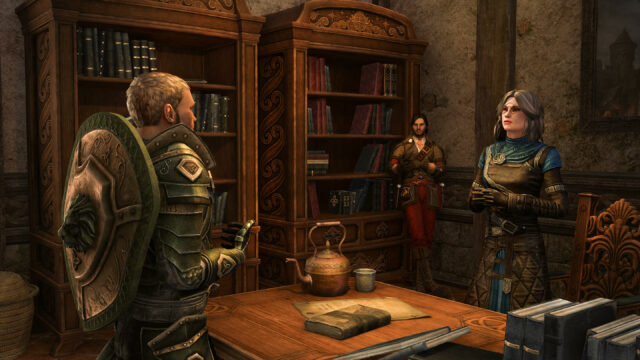 High Isle’s storyline is decently absorbing, and its easy to just get into the main questline, as well as the additional quests dotted around the island. These quests offer a good mix of content, giving players cause to explore further without overloading players with potential things to do. Although seemingly not yet usable in the build, High Isle adds two new companion NPCs, each with their own initial enjoyable recruitment questlines that establish their characters. It occasionally feels like players might benefit from information gleaned in previous releases, but High Isle’s story provides all the information players need to happily follow what’s happening if they do elect to come at it first.

One major addition coming with High Isle is Tales of Tribute, a card game played across Tamriel. Though players can find new decks to use within the game, players don’t have control over the individual cards within and its rules ensure that it requires more on-the-fly strategy than a dedicated deckbuilding game. The Tales of Tribute card board is divided between the player and their opponent’s side, with a tavern in between and a set of patrons to the side. Each player selects to two decks to use for the game, with all four decks then shuffled together and used to make up the cards available at the tavern.

Each turn, players draw a hand of cards from their personal deck, which starts out as a set of gold coin cards. Playing the cards in the hand grants gold that can then be used to purchase more powerful cards from the tavern. In addition to gold, other cards grant power, and while any remaining gold is wiped at the end of the turn, power is converted to prestige victory points, with forty prestige needed to win in official games. That’s not the only possible victory condition, however. Should a player gain the favour of all four patrons, they win the game immediately. These patrons will grant favour if the player and will point towards them if the player grants their requirement. Only one patron may be converted per turn, and the opposition player is able to move a patron back into a neutral stance. 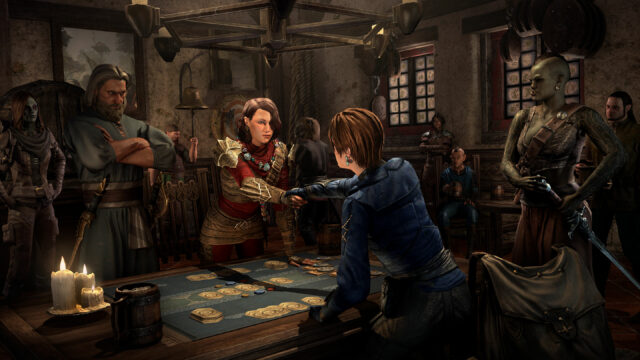 The strategy in Tales of Tribute comes from how players build up their available cards, especially when card combos come into play. Many cards have a more powerful combo effect that comes from playing multiple cards from the same deck in a row. Players will need to determine how to build up their available cards based on what they’ve already picked up and what might be available in the tavern: is it worth picking up a card from another deck knowing that reduces the chances of combos in later hands? It’s one that is tough to appreciate from a basic combination, but it’s very easy to pick up the basics from just the initial practice rounds, and at the same time easy to appreciate how it puts players on an even foot to start off as well as how strategic planning plays a key role in proceedings. There are set to be a wide variety of rewards to be gained from playing the game, both against NPCs and other players, and likely to be a good amount of associated story content with mention of a grand tournament being played.

Although it’s a strong single-player experience, there’s plenty for players to do with others, including some daily challenge quests such as disrupting some magic, demon-spawning volcanic vents that definitely requires more than the two people we attempted one with. Although I didn’t have time to try them, High Isle also adds a new twelve-player trial and additional dungeons. There were a few bugs that impeded quest process, and the AI for Tales of Tribute was most definitely not ready yet, but this was forewarned given the preview build was already around a month old and the overall performance of the build was otherwise solid.

For those curious about leaping into Tamriel, the release of High Isle feels like a good time to do so. With eight years of content readily available for newcomers, there certainly isn’t a lack of engaging content for players to find across its lands, and it’s easy to see how The Elder Scrolls Online has kept going during that time. The Elder Scrolls Online: High Isle will release for PC, Mac, and Google Stadia on June 6, 2022, and for PlayStation 4, PlayStation 5, Xbox One, and Xbox Series X|S on June 21, 2022.