NIS America announced Prinny Presents NIS Classics Vol. 3, its latest collection of remastered titles. The third volume will include tactical RPGs La Pucelle: Ragnarok and Rhapsody: A Musical Adventure. It will launch for PC and Nintendo Switch in summer 2022. Both games will also be available digitally individually, while a $99.99 physical Limited Edition is available to pre-order from NIS America’s online store that includes: 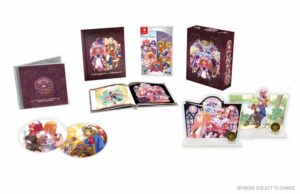 La Pucelle: Ragnarok was released for PlayStation Portable in Japan in 2009 as an enhanced version of PlayStation 2 title La Pucelle: Tactics, which launched in Japan in 2002, in North America in 2004, and in Europe in 2005. The game takes place in the kingdom Paprica and centres on the city of Pot a Feu’s Church of the Holy Maiden that has a group of demon hunters known as La Pucelle. Sixteen-year-old Prier and her twelve-year-old brother Culotte being its newest members, with Prier hoping to become the Maiden of Light destined to challenge the Dark Prince.

Rhapsody: A Musical Adventure is the first title in the Marl Kingdom series that acts as a precursor to the Disgaea series, with La Pucelle also taking place in the same world. It was originally released for PlayStation in Japan in 1998 and North America in 2000. A Nintendo DS version was released in Japan and North America in 2008 and in Europe in 2009. Rhapsody follows Cornet, a girl who is able to talk to puppets, and Kururu, a puppet with a human soul. They attempt to save Prince Ferdinand after he is turned to stone by a witch.