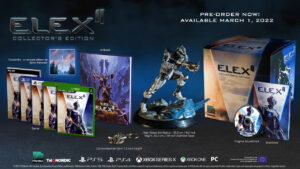 ELEX II is a sequel to 2017 action RPG ELEX. The game is set some years after the events of the first game, with the planet Magalan enjoying a period of peace as new factions rise in place of the vanquished ones. However, protagonist Jax returns bringing news of a new threat to Magalan, and must unite the new factions in order to overcome it.