Sega announced the additional content coming to Lost Judgment on and after its launch later this month. The Quick-Start Support Pack will be available at launch and is included with all pre-orders of the game. It includes the Wayfarer’s Lucky Cat display item for Yagami’s office that provides monetary fortune based on distance travelled, Staminan Spark health items, and three Extract recipes for temporary buff items.

The School Stories Expansion Pack will release on October 26, 2021, and is included with the Digital Deluxe or Digital Ultimate Editions of the game. It adds new content for some of the high school-based side content, including Yagami’s associates as new sparring partners for the boxing ring, a new bike gang motorcycle as well as a new course, a new outfit and additional moves for the dance team mode, a new robot for the robotics club. It also lets Yagami use a new fighting style based on his boxing club experience.

Finally, the Kaito Files Story Expansion will release in spring 2022 and is included with the Digital Ultimate Edition of the game. It adds a new independent story scenario starring Yagami’s partner Masaharu Kaito as the playable character. The scenario is said to feature roughly ten hours of content.

Lost Judgment is a sequel to Yakuza series spin-off Judgment and will take players to the series regular location of Tokyo’s Kamurocho district, as well as Yokohama’s Ijunicho district that was the primary setting for Yakuza: Like a Dragon. The game sees private detective Takayuki Yagami becoming involved in a mystery following revelations made at the end of a court case handled by his former colleagues. Lost Judgment will launch globally on September 24, 2021, for PlayStation 4, PlayStation 5, Xbox One, and Xbox Series X|S. 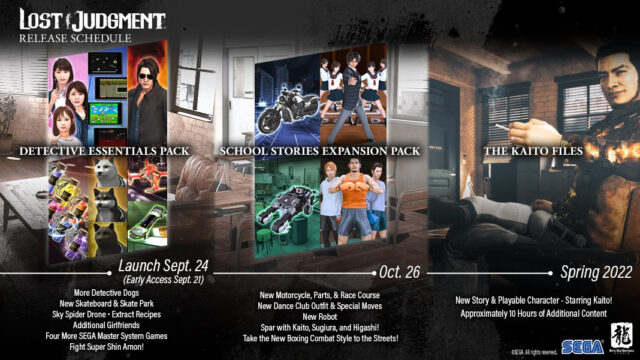