The game oozes a down-to-earth charm, and the Lovecraft-inspired visuals continue to impress. Combat is a blast when the learning curve is mastered and gameplay finally settles in a groove.

Crafting Legends has put a lot of time and thought into its freshman outing Death Trash.  In this post-apocalyptic world, the player finds plenty to do in this bleak action RPG.  Be prepared, for a lot of pulsating pixels as much of the world focuses on bodily experiences.  This is because the world is covered in flesh that sprouts like grass, and the protagonist has an unknown sickness that causes them to puke.  This focus on unique visuals fits as a great sci-fi hook but could be squeamish to those that don’t take kindly to bodily functions or throbbing mounds of flesh.  Combat takes time to get used to no matter which controls are used to play.  Death Trash is not an easy game, but it has many makings of a good one.

The game takes place in a post-apocalyptic world where androids keep the majority of the populace underground, and some people become mysteriously infected and are then sent to live on the surface.  Almost immediately after leaving the tutorial area, being told to never return, the protagonist meets a Fleshkraken.  This is a being that embodies what is to come in the game and can take some time to get used to.  The Fleshkraken is one of many titans in the game that have a connection to the meat piles that grow around the world.  This connection begins to be explored but players will have to wait to uncover all its secrets.  In Death Trash, the protagonist is trying to figure out why they are sick and how to be healed.  The detective work involved with the sickness, along with the true nature of titans, is quite engrossing.  The protagonist has no reaction to this strange new world they inhabit, so while suddenly needing to eat pulsating meat from engorged fleshworms doesn’t cause them to bat an eye, it may cause the player to pause and realize the absurdity of the situation. 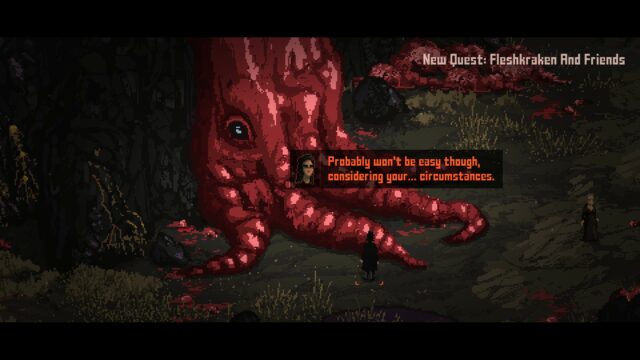 Just making friends with the Fleshkraken.

The protagonist often finds themselves in situations where they need to defend from mutants, bandits, and carnivorous spiders.  Melee is simply swinging the weapon in the direction the player is facing, while dodging enemy strikes is possible with timed side rolls that use some of the player’s stamina bar.  Stamina is also used for stealth, which turns the player nearly invisible and makes the enemy’s field of vision appear in red.  With this, they can be avoided, or the player can opt for a backstab to enjoyably take down an enemy.  Also available are plenty of guns, each with their own scarce ammunition type.  Aiming across all guns is exact, with the exception of the pistol, which for some reason tends to shoot just off the mark, missing targets at critical times.  Skills in the form of implants and bio-tech can also be learned.  The first accessible skill is Shock, a hard to aim electric surge that costs energy.  This makes skills the least used due to energy being refillable at certain stations found sparsely in the game.  Controls in the game are a bit hard to master, with melee feeling at home on a controller, shooting working best via mouse and keyboard, and skills trying to fit in.  Learning the controls is not difficult, it’s just easy to make mistakes in the early going and cause precious resources to be expended.  But once mastered, the combination of stealth backstabs and shooting enemies is a lot of fun.

Combat is plenty in Death Trash, because most spots on the world map have hostiles to be encountered.  Set points on the map are for towns and dungeons while little red radar blips that move around the map are the game’s random encounters.  These encounters may also have helpful NPCs mixed in with the enemies, or just with a wandering merchant.  Due to some encounters having a large amount of enemies, saving beforehand is recommended.  Some enemy encounters are just painful, with multiple attempts needed until timing is down and tips are learned.  Healing in combat is rare, as meat cannot be consumed, and nano health packs are rare and slow to use.  Swapping weapons is also hard in combat as opening a menu does not pause the game.  Bosses are rare but do exist; they are purely optional at this time.  There’s no margin for error against these bosses as they can kill players quickly. 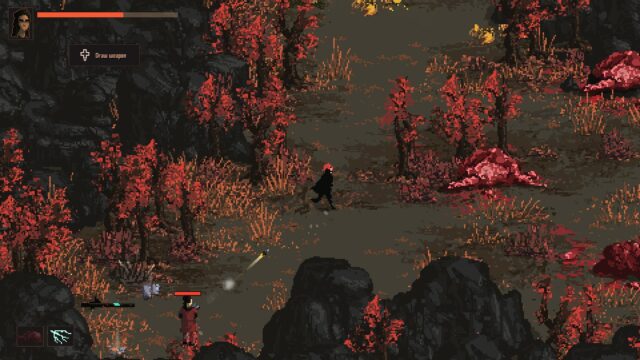 Running away is not the best way to dodge an incoming rocket.

Levelling up in Death Trash allows players to customize themselves to whatever playstyle fits them best.  Additional side skills include the ability to increase pickpocketing success, lockpicking to open doors to new areas and lockers for loot, hightech to hijack enemy turrets through control panels, or empathy to unlock new options in dialogue.  With these additional skills, each level up becomes a choice of what to improve, though upgrading physical skills, defence, or improved damage with a type of weapon all seem secondary because they can be worked around with player skill.  Experience gaining is slow going and are in set areas on the world map, so baring farming encounter blips, grinding is not really an option.  This makes selling extra resources and equipment to get gold for buying the best equipment the simpler option to survive in this bleak world.

Limited storage space causes a lot of headaches in Death Trash.  Gold only takes up one spot, so it is easy to choose to sell things to save space and buy what is needed later.  Keeping one of everything is not an option either because one of every weapon, plus the ammo for that weapon, as well as healing meat, take up over half the inventory slots.  Headbands are also one-of-a-kind and give additional resistance to one type of attack.  This leaves four or five slots of the original twenty-four available for new pickups.  This lack of room leads to a lot of gear being deconstructed for parts, which has its own tab that also fills up quicker than anticipated.  When this happens in the middle of a dungeon, it causes some drops to be left behind, while adding the frustration that some of the objects kept sell for very little.  Nothing respawns outside of the occasional blip on the world map, so trekking back and forth only takes time, but that’s valuable time that could be used to enjoy the game more. 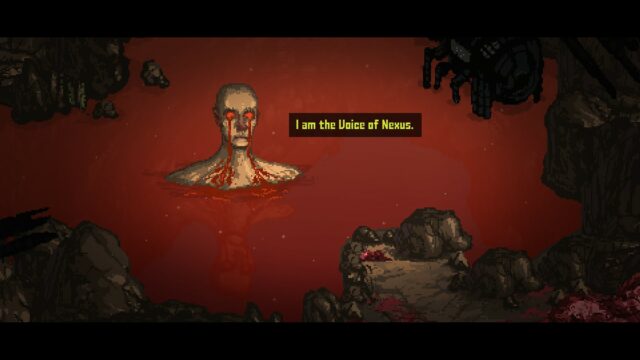 Who is this voice and can we help them as they ask?

Speaking of things to enjoy, the visual style of Death Trash is definitely unique, hearkening back to the 90s action CRPGs with its pixelated looks and post-apocalyptic world.  This is a bleak game, but one done so with full intention, the colour palette of the world screams dirty, and the piles of flesh that appear everywhere like this world’s weeds mean that each area is uniformly Death Trash.  Bosses and titans all have a distinct look that belongs in this world.  Enemy details are deftly done as subtle visual cues between the mutants mean the difference between a normal variety, one zooming around like the flash, or one exploding like a grenade when killed, showing care went into each design.  Musically the game feels like a background track, but it does know when to slow down and heighten the sound effects, making it tilt into horror at times.  One aural effect that should be turned down is the sound the player or NPC makes when they puke, as it is realistic and can be loud.

Death Trash leans a little too heavily at times into bodily functions to get the story and point across.  The detective work on why the world is this way engages enough to compel the player toward the next monstrosity that may cross their path.  The game oozes a down-to-earth charm, and the Lovecraft-inspired visuals continue to impress.  Combat is a blast when the learning curve is mastered and gameplay finally settles in a groove.  It does end abruptly, which means there’s plenty left to add and enjoy in the future.  Hopefully it is a short wait to see the full picture the developers want to show.  Meanwhile, backstabbing some bandits will pass the time nicely.