After spending a couple of hours with the demo, I am intrigued about the world the development team is crafting.

Crafting Legends’ pixel-art action RPG Death Trash is a game I wasn’t aware of before this year’s pre-E3 announcements, even though it had been announced a couple of years ago. Not only is the game coming along nicely (it’s about to enter Early Access) but there’s also a playable demo for it, courtesy of Steam Next Fest. While it gets points for combining several things that appeal to me, adapting a Souls-like attack-dodge combat mechanic to work in an isometric game can be challenging. Nonetheless, after spending a couple of hours with the demo, I am intrigued about the world the team is crafting.

The demo doesn’t take long to draw players in with some intriguing setups. A handful of large-scale pixel-art scenes set the stage: the planet Nexus has been plunged into an apocalypse, with vestiges of humanity driven into hiding while bloodthirsty machines are scouring the planet’s surface to hunt down and kill any survivors. After customizing the look and initial skill point allotment of the main character, the player is thrown into the midst of an alarming situation: you’re being cast out of the relative safety of an underground community, for reasons not really clear to you other than that there’s something wrong with your body, and told never to return or approach other subterranean settlements, or risk being immediately terminated. Even though you’re given the option to undergo a tutorial that covers the game’s basics for combat, under the guise of preparing you for your impending banishment to the surface, your character then immediately leaves the colony, forced to fend for yourself in the dangerous surface world.

However, before the “action” piece of the gameplay equation has a chance to kick in, you run into the towering Fleshkraken just outside the colony’s entrance, a disturbing, betentacled mass of, well, flesh. Now that you know the game’s basics and have been robbed of the safety of the colony, the Fleshkraken acts as a way to give the player some early guidance in the form of your first sidequest — he wants you to find him a friend, and sends you to the nearby exile settlement of Tauris. 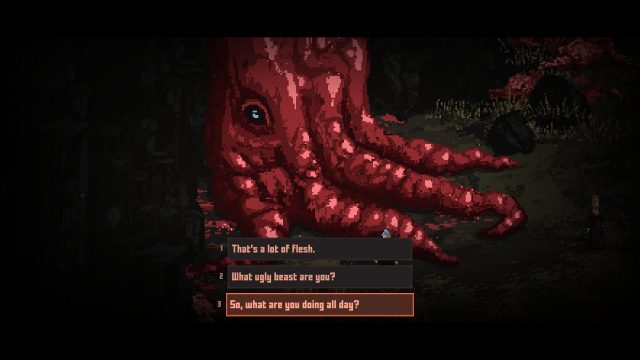 Well, it’s called the Fleshkraken. What did you expect it to look like?

Though it’s only been early steps so far, these first few minutes do much to introduce the player to the world of Death Trash. Things are dangerous on the planet’s surface, and humanity is nowhere near the top of the food chain anymore. Roaming bands of armed scavengers make life difficult, and the appearance of the Lovecraftian Fleshkraken leaves no doubt that there are some horrific surprises in store out there. But humans aren’t at the very bottom of the food chain either, as evidenced by the ability to consume organs and meat — which, the demo points out repeatedly, is in surprisingly ample supply in the wild, seemingly growing right out of the ground — in order to heal yourself. It’s as nauseating as it sounds, and the squishy sound effects add to this; other gross-out moments include being able to vomit at the press of a button — a side effect of whatever affliction your character is suffering from — then collect and use the “biolubricant” to power certain machinery.

Leaving the Kraken Temple, the game transitions to its overhead map screen. At this stage, the map is blank, save for your current location, and all you have to go off is a vague compass direction provided to you. As you click on the map and watch the blip on the map travel eastward, the surrounding areas of the map slowly emerge from shadow. After a bit of traveling, players will invariably stumble onto a point of interest begging to be explored: the Festering Gorge.

Now that I experienced how the role-playing works in Death Trash, the Festering Gorge gave me ample opportunity to try out the game’s other main mechanic. Combat is very straightforward in its design: attack and dodge roll out of harm’s way, rinse, repeat. There’s a bit more to it, such as firearms for ranged damage, a stealth mechanic for a single sneak attack, and a limited-use elemental attack that temporarily shocked enemies, letting me get some free hits in. The demo provided all these tools in short order, and they were easy enough to pull off mid-battle, with the only finicky one being the firearms that require careful aiming to do damage, using the right thumbstick for aiming while moving with the left. 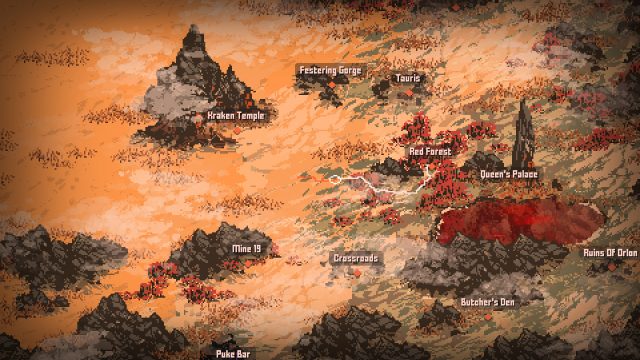 Maybe Mordor is just over that next mountain ridge?

Having several options available during combat, albeit limited by available rounds of ammo or remaining electrical charges, was, perhaps, just a bit overwhelming, and the tendency was to revert back to the tried-and-true slash-dodge action RPG strategy. However, despite investing as many points as possible into creating a melee-focused character and playing on normal difficulty, just going in swinging my cudgel was often rewarded with death, and even a duo of low-level marauders was able to quickly wipe me out if I got too careless, not to mention the tougher enemies who came packing swords or laser guns of their own. An easier difficulty option does exist, but it’s worth noting that, at this early stage at least, Death Trash appears to pack a decent challenge.

Parallels to some classics of the genre can be drawn, particularly Interplay’s original Wasteland and Fallout games; arriving at the settlement of Tauris, interacting with its inhabitants, and being sent to the bandit-infested Bunker 17 to procure some machine core parts and other materials (a crafting mechanic is also referenced several times in menus, but was not available in the demo) immediately feels heavily reminiscent of these titles. But while there does seem to be an element of player choice available here — one particular NPC seemed interested in interacting with me until I responded in a flippant manner, after which her dialog was permanently cut off for me — deep role-playing seems less a focus for Death Trash, eclipsed by the action-heavy combat.

I was impressed by the early glimpses of a unique and engaging narrative evident in this demo; before it concludes, several more breadcrumbs that I won’t spoil here are sprinkled in that point to some neat mysteries that will need to be unearthed in the full game. The combat certainly shows promise, with lots of implements that can be utilized in the heat of the moment and many ways to customize a character build to take full advantage of them. However, tension is supplied more by the challenge of individual encounters rather than any inherent risk-versus-reward mechanic. The game certainly borrows tiny bits and pieces from other titles, but it comes off very much as its own thing rather than feeling derivative: a bit mysterious, a bit gross, and a bit of a challenge. Death Trash is set to be released for PC, Mac, and Linux in 2022, with an Early Access version planned to launch a bit later this year.