By now, the formulaic approach to stamina-based, risk-versus-reward action RPGs has gotten pretty derivative. That’s not meant to be a disparaging remark; it’s been utilized by so many games because it works so well and makes for a solid, entertaining foundation to erect gameplay systems on. But it has to be executed correctly, and no matter how universally tested it is by this point, theoretical and practical are two different animals entirely. Morbid: The Seven Acolytes is, unfortunately, a case study of what can go wrong even with such a well-established formula.

The core issue here is the game’s combat system. Morbid isn’t built the same as other Souls-like action RPGs, but rather features a top-down isometric view of the action, with admittedly pretty pixel graphics, so some differences are to be expected. Still, the gameplay sounds like it should hit the mark, at least on paper: Players take on the role of the Striver, the last member of the ancient order of Dibrom and the final hope of the land of Mornia, who must slay the seven Acolytes and save the world. The Striver is able to wield a variety of melee and ranged weapons, execute regular and heavy attacks, dodge roll, run, parry, and sneak. Most of these actions consume a stamina meter which rapidly refills itself automatically. She can also heal by using items and gain experience by killing foes and completing quests; each level-up nets a skill point, which can be used to power up equippable Blessings that provide certain stat buffs. It is even possible to improve weapons by slotting in runes picked up during the journey. So far, so familiar.

The problem becomes apparent shortly after starting the game, as soon as the slow-paced, trading-blows nature of the combat reveals itself. The flow of combat never quite manages to approach frenetic, instead quickly devolving more into a pattern of “hit once, roll away, repeat”. When the Striver approaches an enemy, both begin to wind up their attack, and it’s simply a matter of being faster on the draw. After the Striver’s attack connects, the enemy will still carry out their attack immediately, so a quick dodge is required. Should the enemy draw first blood, the Striver’s attack is cancelled, and the whole dance begins again. It’s rare to actually have time to chain together two or more attacks before an enemy is either dead or retaliates, forcing the player to evade instead. The fact that many non-elite enemies can be defeated with a single heavy attack, particularly if approached using stealth for a damage bonus, doesn’t make the swordplay any more fun, just less drawn-out. Bosses don’t change up the core formula appreciably, but their larger health pools require having to look for frequent pockets of safe space to let the stamina bar refill. 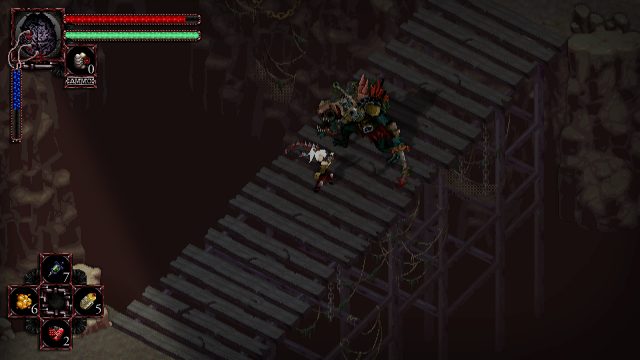 Character designs are nice, but even the larger-scale bosses want just a bit more detail.

The combat system certainly isn’t broken by any means, just a bit on the pedestrian side. This is only exacerbated once it becomes clear that the game lacks any real sense of risk-versus-reward management. Slaying foes accumulates experience points and nets the occasional item drop, but nothing is lost upon death, save for a bit of progress since the last checkpoint. Unlike other Souls-likes, the Striver doesn’t collect any souls, tech scrap, salt, or other similar upgrade catalysts that must be recovered after dying before they’re permanently lost. Resting at a roadside shrine refills charges on the Stone of Dribrom, the Striver’s healing item, at the cost of respawning all defeated enemies, but since there is no penalty for dying, it’s far more convenient to just continue on without resting, to make it to the next shrine before health finally runs out. All of this robs the combat of any immediate urgency; those who dislike the tense combat of Souls-likes may appreciate this omission, but since the game was advertised as such, it’s a glaring void indeed.

When it comes to the lore created for the world of Mornia, the game fares much better, and it’s obvious the developers had a great time coming up with the various bestiary and other codex entries that provide some entertaining background noise to the game’s proceedings. Since the game clocks in at under ten hours, this feature isn’t as expansive as one might like, but what’s there is well worth the time it takes to read nonetheless. All seven Acolytes were once normal inhabitants of Mornia whose lives took tragic turns, causing them to become willing hosts for the malevolent Gahars that invaded the land. Unfortunately, there isn’t much of a narrative available beyond uncovering these short written vignettes that fill in the bosses’ tragic tales or brief histories of the locations visited on the journey — even the few available sidequests are rather uninspired affairs — and even the few townspeople who have decided to remain in Mornia don’t have much to say beyond a few lines of stock dialog that quickly repeat.

As mentioned, the game’s pixel graphics are one of its stronger points. To match its dark, Lovecraftian tone, the environments are suitably dreary, reflecting a world that has been in decline for some time. Character designs are good, and it’s particularly enjoyable to splash the ground red when cleaving through a foe with a satisfying squelch of body fluids. However, there were times when it felt like a bit more detail would have gone a long way, particularly in the boss designs. The game does scratch that itch for satisfying pixel art, accompanying it with an appropriately gothic soundtrack of instrumental and choral arrangements. Luxuries like voiced dialog are absent, though with the limited cast of non-generic NPCs and the sparse amount of worthwhile interactions, that isn’t much of a surprise. 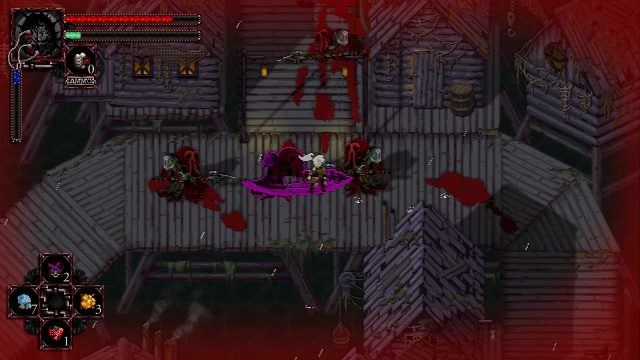 It’s a Striver’s job to paint the town red. Literally.

There are still a few last nitpicks worth mentioning. The Striver’s normal walking speed is so maddeningly slow that it almost isn’t even an option, while running everywhere means frequent stamina rest breaks. There were also two points within the game when progress was cryptically barred until certain undisclosed conditions had been met elsewhere, forcing some guesswork. Most annoying of all, however, is the glut of items, particularly magic runes, that clutter up the limited inventory space in no time flat. Entering a menu screen to reorganize the grid-based inventory space is never a fun activity, and doing so frequently is something that should have simply been avoided altogether. Because of the game’s top-down isometric perspective, there were also a few times when an enemy’s attack connected when it just shouldn’t have; standing in the area directly north of an enemy (horizontally speaking) means a swipe up they make (vertically speaking) will still at times connect despite there being no actual spatial connection between the two locations.

Morbid: The Seven Acolytes could have been a highly enjoyable foray into the 2D side of Souls-like action. It features a compelling world, presented through stylish pixel art and good sound design, and really nails the highly entertaining bits of lore sprinkled throughout the world to make it come alive. However, some rather important missteps with the combat make the experience far too toothless, annulling the sense of fast-paced action and dramatically lowering stakes upon defeat. Rather than rising to the level of its lofty inspiration, it instead feels buried alive, flatlining into a state of rigor mortis due to its plodding combat.