We’ve officially made it to the halfway point of the calendar year. As we embark on #JRPGJULY 2021, don’t forget to follow me on Twitter to keep up on my July conquests. First, let’s take a look and see what’s good from June. If you missed it, you can check out my review of the new Dungeons & Dragons: Dark Alliance and impressions on the kid-friendly Spirit game. E3 was just last month, providing (among other things) the Stranger of Paradise Final Fantasy Origins limited demo. It was an otherwise quiet month, providing an opportunity to examine some of the rarer selections from the backlog. I am trying to prioritize Switch games so I can play them outside, but it’s been so warm I usually end up going back inside and switching to docked mode.

Goblin Sword is a port of the iOS game of the same name from Gelato Games, and described as a retro-inspired action platformer with light RPG elements. Think throwback aesthetic with modern mechanics, and you’ve got this game pegged. These RPG elements are intricately woven into the game mechanics and provide for a thoughtfully challenging game. One of my favorite things about this game is how it really nails the vibe of the Super Nintendo hack-n-slash ARPGs. The sprites, backgrounds, enemy designs — nearly everything — effectively serve as homages to yesteryear without feeling cheap, hokey, or trite in the way so many of these indie platformers can. The music pulses with moody synthesizers, providing an excellent energy to the double jumping and slashing. There is surprising depth to the title, as players can continue to explore each stage after clearing its primary boss. Moreover, unlockable weapons provide a range of abilities or effects allowing for some limited customization.

So this game, Goblin Sword by @GelatoGames is a lot of fun. pic.twitter.com/YLnEYbbYe3

With an overworld representing a marriage between Super Mario World and an iOS title, there is no shortage of levels in this game, with dozens across several different stages. There are hidden routes, treasures, and gems to discover in each level, as well as optional super-bosses to encounter further in each world. Gamers can revel in the retro aesthetic while chewing on the meaty gameplay with ease and pleasure. As players progress through the disparate stages, magical power-ups and permanent health boosts increase odds of survival, but be prepared to die frequently and restart that particular stage. There is no shortage of frustrating deaths, but only rarely do they feel unearned. There are some light puzzle elements which provide a brief respite from battling hordes of the undead.

The Switch eShop has some questionable quality control checks, and there is a glut of mobile-to-Switch ports that feel haphazard or done as an afterthought. Fortunately, Goblin Sword provides for tiny doses of a cute yet challenging experience. I kept thinking, “This would be a great game to play during a pre-pandemic commute on public transportation.” As it turns out, it’s also a great game to play during meetings on Zoom or Microsoft Teams.

This was another eShop special. It’s hard to feel regretful over a game that cost less than a fountain soda at your nearest McDonald’s. This is one of those games you see in the eShop and think, “I’d love to try and make my own video game.” It’s also one of those games where you initially wonder who would make it or buy it, but then you buy it and wonder why you waited so long to buy something released on Switch nearly three years ago. Yes, I fell down the rabbit hole with this game within the first thirty minutes of playing it because I was remarkably feeling it. Turns out, this game was fully funded on Kickstarter after it raised nearly $40,000 in April 2017. Who knew — not me. I’m mad I only paid a few dollars for this. Can I venmo the developers the rest of the full price of this game?

Cattails starts out with an opening cinematic wherein a family adopts a cat and then abandons it (you) in a field. Dark. From here, you meet a friendly cat who provides some initial advice and a lair to live in. Players are released into the open world, able to live out their wildest feline fantasies out, so long as those fantasies included hunting mice or getting involved in turf wars with rival cat gangs. There are tasks to complete, treasures to uncover, and of course we cannot forget to discuss the dating sim elements. Yes, in Cattails you are able to romance a fellow cat, produce a litter, and then bring them along with you for the raucous fun of eating mice and brawling with other alleycats. Just be mindful of your energy and hunger meters.

Where the cat goes and what they do is entirely up to the player, with a few exceptions. As each day proceeds, the player’s hunger meter decreases, eventually causing damage after reaching 0%. Players must engage in stealth mode to hunt and eat prey to restore a few points. Hunting for prey does become somewhat tedious as the battle and stealth mechanics are the least compelling part of the game. The battle system essentially comes down to spamming the attack button during frantic battles with little regard to strategy. As players complete tasks and scrap with other cats, experience points can be funneled into hunting, fighting, swimming, and foraging abilities. Watching my cat thrive as a member of this community was enjoyable. 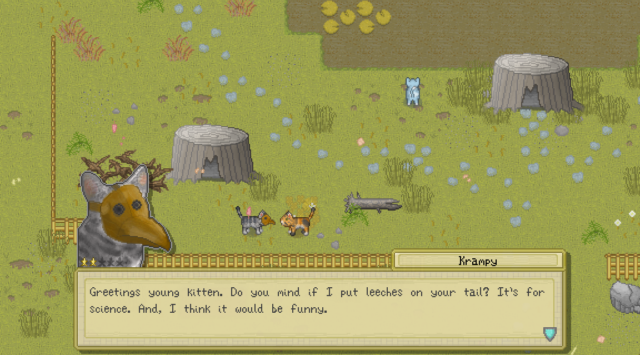 This weird and charming game about being a stray cat.

The game is so delightfully weird and quite unlike many other games I’ve played. The character portraits are beautiful, muddled pixel drawings and the open world has this distinctive art style that reminds me of a more grounded Earthbound. This game exudes a calming charm with unique graphics and a gorgeous arrangement that I enjoy so much I bought it on Steam. There is so much wonderful weirdness to behold in Cattails, even if I enjoyed the vibe more than anything.

If your RSS feed pinged when this article published, two thoughts: First,  congratulations on having the good taste to be a devout fan. Second, you know I love Sailor Moon. Another franchise near and dear to me is Buffy the Vampire Slayer. I remember going to GameStop and buying an Xbox just to play this game. My mom drove me to the mall and was so annoyed when I hauled that giant console to the car after expressly stating I was not going to the mall for an Xbox. It was the last time I owned an Xbox console, in all its clunky, large, American glory. This game is surprisingly good. I’ve long since given up my 382-pound Xbox console but always retained that beautiful, neon green case. Twenty years after initially playing, I thought it was finally time to revisit Sunnydale High.

First to address the issue of the missing console. It only took a few garage sale visits to find an Xbox 360, but it still didn’t play the game because of some wonky backwards (in)compatibility, so I also needed to buy a hard drive for it. Not just any hard drive; only a specific, first-party Microsoft-branded hard drive would work. I eventually got my hands on one, only to realize the Xbox 360 I had was a slim model and the hard drive I obtained was for the initial model, released way back in 2005, during my freshman year of college. Technology is swell.

Buffy the Vampire Slayer takes place during the show’s stellar third season, but is friendly to gamers who have never seen an episode. The first stage serves as a tutorial of the game’s battle mechanics and controls while easing the player into the story, which focuses on a group of demons seeking to revive the Master, the main villain from the first season. While knowledge of the first season is preferred, the cutscenes provide enough exposition. Twenty years later, and the title surprisingly holds up. There are plenty of cutscenes featuring voice acting from nearly the entire television cast, seemingly everyone but Sarah Michelle Gellar. The fighting mechanics are smooth and emphasize combo attacks. Buffy is able to pick up a host of weapons including baseball bats, rakes, and the like which frequently break with use, resulting in a spare stake or two. Buffy can run, punch, jump, kick, and jump-kick her way through various scenarios. 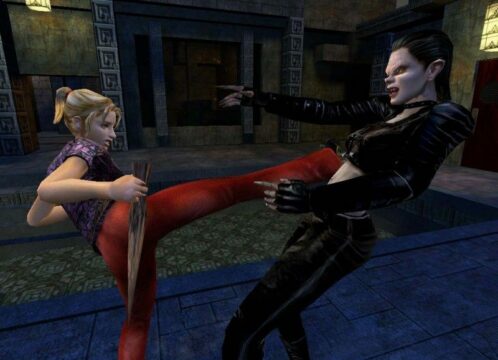 There are tons of one-liners from friends and foes alike. Buffy runs into one too many locked doors with no discussion as to why she can’t break them down, but you just have to accept the limitations of hardware at the time.  The game delivers with a satisfying combat system and a polished presentation resulting in compelling gameplay that feels organic to the series. This is a delightful action game that lets players live out their fantasy of becoming a member of the Scooby Gang.

A short yet entertaining selection of games. This month is #JRPGJuly, which I am participating in this month. I will be playing Star Ocean First Departure R on the Nintendo Switch. I will find time to blast a few more entries off the backlog and will be back in August with another breakdown. Keep cool, everyone! In the meantime, if you have any suggestions for anime video games (old and new) to try, let me know in the comments below or on Twitter!