While the characterization is a bit over-the-top, the Final Fantasy take on the Soulsborne subgenre may prove compelling.

Perhaps the worst-kept secret at E3, publisher Square Enix confirmed the announcement of Stranger of Paradise Final Fantasy Origin, a collaboration with developer Team Ninja. Aptly described as a Dark Souls-inspired trek through the world of the first Final Fantasy, this new title delivers intense action in a surprisingly dark fantasy setting. While the characterization is a bit over-the-top, the Final Fantasy take on the Soulsborne subgenre may prove compelling to RPGamers when it comes to consoles in 2022.

In Stranger, players control Jack, a man of anger and prone to violence. He is accompanied by Ash and Jed as they force their way into the Chaos Shrine, a vast stronghold of malevolent energy. The trio quickly encounters a goblin, who comes at them swinging a knife. Unlike the turn-based or action-oriented Final Fantasy entries, this battle system is new to the Final Fantasy series, and immediately thrust upon the player. Fans of the Soulsborne games know the drill: Jack must first study enemy movement patterns, and then block and parry attacks from the goblin in order to cause substantial damage. There is no spamming the attack button to force your way through, even on the easy setting. As the party races through the Chaos Shrine, they eventually encounter another Final Fantasy staple: a living Bomb. This time, the enemy hurls fire onto the ground, incinerating the earth around Jack. Those familiar with the Chaos Shrine from the original Final Fantasy will enjoy seeing those sprite designs come to life with grotesque detail. 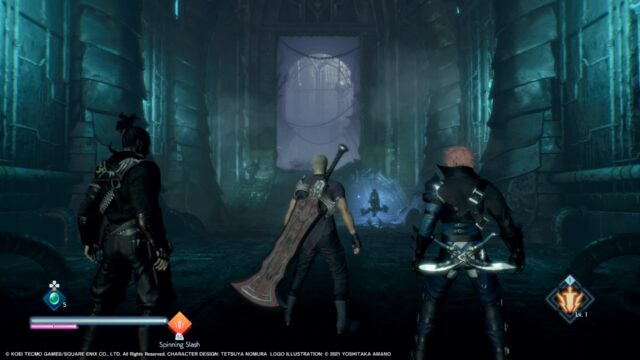 Jack and his cohorts eventually approach a pulsating blob, from which a larger goblin emerges. After using his greatsword to deplete the goblin’s break gauge, an on-screen prompt appears. Pressing it allows Jack to use a final attack, crystallizing and killing the enemy. During these encounters, Jack’s job level as Fighter steadily increases, and he’s rewarded with points to be expended in the abilities menu. After activating enough nodes, Jack unlocks the Warrior job. Towards the conclusion of the Shrine, Jack obtains a staff which allows him to utilize Black Magic. The party finally makes it to Garland at the heart of the dungeon. This boss encounter is flashy, dramatic, and treacherous, requiring both close combat and efficient deployment of magical abilities.

Graphically, Stranger of Paradise underwhelms — at least on the PlayStation 5. The opening scenes of the Chaos Shrine are dark and drab, coming across as more muddled than foreboding. As the group ascends towards the center of the Shrine, the environment around them opens up revealing a more imposing and impressive landscape. Enemy designs reflect the essence of Final Fantasy through a darkly grim lens, most reminiscent of the life-like Daemon enemies featured in Final Fantasy XV. However, the characters seem out of place as they are a bit too stylish, handsome, and angry. I fully expect the developer to devote more resources to refining the presentation. 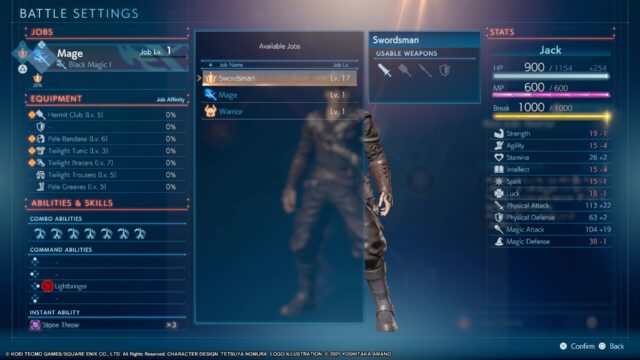 Gameplay continues continues the marriage of Final Fantasy elements to the Soulsborne format. Jack’s potions are refreshed at each waypoint, known as memory cubes, but so are the enemies he dispatched on the way there. The battle system is somewhat overbearing with almost too many options at any given time. Players can vacillate between two weapon stances, the second allowing the use of magic. Players can lob a magic spell, or hold and charge the strength from Fire to Fira, for example. The magic system is a great example of the Final Fantasy touch, although its targeting accuracy should be honed during development.

Stranger of Paradise continues the series’ rich tradition of outstanding music. Naoshi Mizuta returns, providing another set of hyper-pulsing electronic themes with generous callbacks to the original Final Fantasy‘s soundtrack. There are varying difficulty modes available for players. While battles can be challenging, there is little sense of tension or anxiety that is so prevalent in Soulsborne games. There are very few instances of an enemy surprising a player with a knife to the back; rather, most enemies are waiting in fixed locations or magically appear. Correcting this would add a palpable sense of dread and lend credibility to the mood the developers are attempting to set.

Ultimately, Stranger of Paradise Final Fantasy Origin is the uber-dramatic retelling of the first game in a classic series borrowing a gamestyle I’m not sure anyone was asking for. While this initial trial shows some promise, there are areas of improvement to work on during development. The cause of Jack’s anger — and how his urban chic sartorial sense came about — will be revealed to players in a truly chaotic fashion in 2022. RPGamers looking to check out the trial can do so on PlayStation 5 through June 26, 2021.