Welcome to Backloggin’ the Year, a feature that discusses the challenges and excitement that comes with working through your backlog. What started as a humble feature running solo has now blossomed into a foursome of RPGamer staff each trying to blast their own backlog. In this introductory post, you can learn a little more about this year’s backloggin’ crew, their backlog, and how each will be tackling their pile of games.

If there is one thing that gives me anxiety, it is having a lot of something. I both revel in and revile having large backlogs, whether it is books or video games. I love having lots of choice, but I often get overwhelmed by how much I own, and that has not changed. I started “Backloggin’ the Year” to confront my anxiety about owning a lot of unplayed games. As the feature has grown, I have been able to gauge my spending habits better, understand more of my likes and dislikes, and have often ended up playing gems that made me go “Why didn’t I play this sooner?”

And I love those moments.

For 2021 I am bringing friends on this journey, as Anna Marie, Pascal, and Paul are going to be sharing their journeys alongside mine. It is exciting to not be doing this alone and we all get to hold each other accountable. I will continue the new tradition that, when I complete an RPG, I’ll put a poll up on my Twitter as to which games I should play next. Other goals include:

I bought over thirty-six games last year due to the pandemic bumming me out. While that’s smaller than previous years, I would genuinely like to buy even less than that if I can. Given I think the pandemic is staying a while longer, I am hopeful and excited that maybe I’ll knock out more than that, but we shall see! Here’s to another thrilling year of gaming!

Reading Sam’s backlog feature over the years always seemed like a great motivational tool to finally get off the couch and do something about my own ever-growing pile of shame. Notice the intentional use of the word “seemed”, but it seems I won’t accept the stove is hot until I’ve put my own hand on it. So here I am, ready to pitch in with the other staff members to make this community feature happen, and hopefully be rewarded for it with a nice chunk chipped off my backlog.

I know the satisfaction of checking games off the list, I really do (a few months of quarantine certainly helped in that regard), but I can’t seem to keep from filling the gap right back in again the second a holiday sale crops up. So fresh off the heels of the 2020 holiday season, my pile is bigger than ever, and while everyone is worried about losing those gained holiday pounds, I could sure use the motivation to shed some pesky backlog titles.

For this particular feature, I will be concentrating on my now-last-gen consoles, so PlayStation 4 and Nintendo Switch for me, with maybe the occasional DS or Vita game thrown in. (My Steam backlog is massive, but that’s a sad story for another day.) My initial set of rules, until I decide to break them, are:

(We did say this feature would last the next eight years, right?) 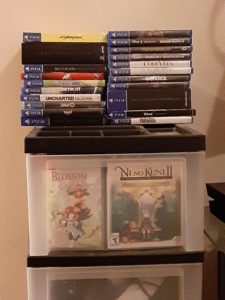 Can Paul Pound His Backlog?

After what seemed like a generation of lurking, the pandemic was gracious enough to give me the chance to join RPGamer last fall as a reviewer. Being another RPGamer with a backlog larger than a stimulus package, I am thrilled to join the other staff in documenting our journeys through our respective backlogs. Truthfully, I’ve always wanted to serve as a historian and know I will excel at the opportunity to provide edutainment for a captive audience.

With the dawn of the new console age, I thought it would be appropriate to take a generational perspective to my backlog. I am going to start with an 8-bit era RPG and make my way up through the console eras, sampling a number of games I’ve either never played, never completed, or purchased and never started (some of which are still sitting in shrink wrap in my basement). While I regret to admit my backlog has such depth I’ve abandoned my previous (and now badly outdated) list, Anna Marie’s tips for managing a backlog have inspired me to track each game I play and purchase in 2021. I am going to chisel away at my backlog while also re-examining my impulsivity in buying new games.

My goal is to complete at least one game from every console generation, starting with the Game Boy and working my way up past the PS4/Xbox One consoles and ending with Switch or iOS.

These are my rules:

This is not an inclusive list, but here are some games that I am thinking about tackling during my backlog:

Taking a page from Sam Wachter, I am going to start with my own first selection of a game to be announced on Twitter. Once the game is completed, I will post choices for the next title and allow both of my followers to weigh in. Some of these games have been haunting me through the years/decades and I’m really hoping to be able to finally see what all the fuss is about with Skies of Arcadia since I picked up a copy at a retro game store in 2014.

Thanks for taking a seat at the table. When this tale is said and done, I hope to have established a fair and accurate accounting of my backlog and taken a big bite out of it during the process.

I’ve been slowly plonking away at my backlog since 2015 with a few loose rules, but with so many amazing eShop sales, my backlog jumps by multiple games regularly.  My goal for this year is to knock out all the games I picked up during the holiday sales in 2020, plus some other loose ends.

First and foremost, I want to chip away at six partially completed games from my backlog:

Second on my catch-up plan is the remainder of my Black Friday and Christmas haul on Switch:

Third is streaming the trio of Switch TRPGs I’ve picked up over the last few months:

Our goals are set and our path is…probably not super clear, but at least we have an idea where we’re going! How’s your backlog doing? Are there any games you see on our lists that you especially recommend or want to tackle yourself? Let us know in the comments below or drop by our Discord to chat in our #currently-playing channel!