Backloggin’ the Year – Paul’s Playthroughs, May 2021

June has arrived. The weather is warmer, restaurant patios are open, and E3 is around the corner. In my family, this June in particular means the arrival of two brand new Sailor Moon movies on Netflix. For the three people unaware of the series, it is the 1992-1997 anime adaption of the manga series from Naoko Takeuchi. A reboot of the series premiered in 2014, named Sailor Moon Crystal, which aimed to serve as a faithful retelling of the story as told in the manga. The last season aired in 2016, covering the third arc of the series. The fourth arc is presented in two films which initially aired in Japan earlier this year. The last time a new Sailor Moon movie was released in the United States was…2000.

In honor of the new films, May’s backlog selections are focused on the highs and lows of the series’ video game entries. What may surprise my loyal readers is not only how many games came out during the initial series run (35!), but also how many different genres are represented. I am readily available for an interview if anyone is curious as to my wish list for a modern Sailor Moon video game, but for now let me discuss a few of the varying experiences to be had through retro gaming:

Welcome to the holy grail of Sailor Moon video games. Never released outside Japan, Sailor Moon: Another Story is a turn-based RPG for the Super Nintendo featuring an original story that takes place in between the third and fourth seasons of the show. Thankfully, fan-translations of the game exist, most recently in the form of a corrected translation of a popular 1999 fan-translation version. In Another Story, Usagi and the Sailor Guardians are surprised when a number of previously defeated enemies return, leading to the discovery of the “Opposition Soldiers,” a group of invaders from an alternate future who threaten to rewrite past and future events through a force known as Hell Destiny.

The original story and characters feel organic to the series, and the characterization of the Sailor Guardians ring true to their anime counterparts. Players can expect to battle series favorites, including Queen Beryl, the Black Moon clan, and the Death Busters as well as numerous iterations of the various monsters of the week from the anime. The inner guardians are featured prominently, each starring in a sub-chapter that takes them on a hunt for crystals around the globe. The battle system is turn-based, with up to five guardians in battle at any time. While each character features their typical attacks, players are able to experiment with group combinations of anywhere between two and five party members. There are dozens of combinations to discern with seemingly endless effects, including dual-elemental attacks and group healing. The combo system is oddly reminiscent of Chrono Trigger, emphasizing player creativity to uncover effective new techniques.

The presentation is stellar and would pass standards for a modern, retro-inspired game. The character sprites are finely detailed with flourishes that make it clear this is a game for fans: for example, Sailor Mars’ victory pose in the game so closely embodies the zeal of the character that a casual player might not see it, but a fan of the character will notice and appreciate. The attack animations are fair representations of their animated counterparts, and are reminiscent of an SNES-era Final Fantasy spell animation. The music is very clearly inspired by the anime, with some battle themes carrying over directly from the anime. It is easy to recommend this game to a fan of 16-bit era RPGs because at the end of the day, it’s a pretty solidly produced turn-based RPG from 1995 with some surprising production value.

Jokes I’ll never get tired of in video games: pic.twitter.com/pe5wcuCgFl

Be forewarned: balancing issues abound in this one. The game requires extensive grinding to level up. Early on, when each guardian is on a solo mission, the game is oppressively tough. This spike is somewhat balanced out by obtaining two accessories for each inner guardian early on in each sub-chapter. The enemy AI, if not overpowered, lacks sophistication, with even boss fights featuring predictable attack patterns. As long as the party is leveled enough, fights should never pose a true issue. While getting around the balancing issues may be a bit too much for some gamers, those who stick it out will be treated to a high quality anime JRPG. This is definitely a top-tier Sailor Moon video game.

This brings us to our next collection of Sailor Moon games, the beat ’em ups. Here we have Sailor Moon and Sailor Moon R, which were released four months apart in Japan for the Super Nintendo in 1993. These games are classic side-scrolling brawlers, allowing for players to select one of the five inner guardians as they face off against the Dark Kingdom or Black Moon. Each Guardian has her own assortment of attacks as they battle against palette swapped enemies. Sailor Moon R features marginal graphical enhancements over its’ predecessor, and a mini-game starring Chibiusa.

These games are fairly basic. The characters feel oddly stiff with limited range of movement and attack options. It feels unusual that fists and kicks are the primary weapons for these supernatural teens who can control the elements, but flex on, ladies. The stages are well-detailed, colorful and varied, even if a few only vaguely resemble scenes from the series. The games are enjoyable if not necessarily groundbreaking, and there is a certain charm in stomping through levels as your favorite guardian. There are a few different versions of these games: the Sega Genesis and Arcade versions seem to be the most graphically enhanced. A casual fan of either Sailor Moon or the genre can easily get some miles out of these gals. 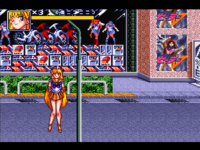 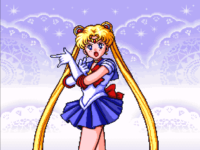 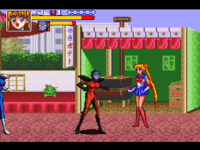 There are not many Sailor Moon games that exist outside of the 16-bit era, and perhaps for good reason. I remember playing this game around twenty years ago, and it was not an impressive game then. The CGI opening is actively harmful to watch, and things don’t improve much from there. This game exists in that purgatory transition period between consoles. This has the bones of the Super Nintendo fighting games, awkwardly retrofitted to use the capabilities of the new technology which ultimately backfires. There are no survivors.

The aspiration of 3D character models is undercut by the painful, muddled reality of what appears on the screen. In 2001, I thought the input delay was my console’s fault; in 2021, I know better. Watching the character models flail about when making a pose is more akin to my toddler stumbling than a victorious battle stance. I could make this analogies all day or I could just show you precisely what I’ve been describing:

If you must play a Sailor Moon fighting game, stick with the Super Nintendo offerings.

Dishonorable Mentions: The 5 Hour (or MUCH LESS) Rule

There are a host of other Sailor Moon games out there, including a series of 2D fighting games for the Super Nintendo, all of which fare better than the SuperS fighting game described above. I only dabbled briefly because the computer AI is so difficult I am often able to get a round or two in before facing utter decimation at the hand of a computer old enough to have a master’s degree. Unlike the beat ’em ups, the Sailor Moon fighting games feel more organic to the series because of the implementation of more abilities and attacks. Character designs are detailed and fighting arenas are varied. I bet playing with another human would be an easier experience, but I’ve never found someone willing to play these games with me. 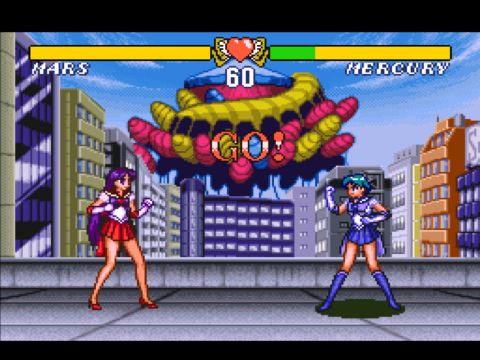 There are two Game Boy titles and one Game Gear title. I used a well-known variation of the 5 Hour Rule, otherwise known as the 5 Minute Rule, with these high-tech experiences. They are side-scrolling ARPG-esque games with some light platforming. I typically have issues playing games this old because the experience is generally clunky and inelegant, and this is no exception. I have so many fond memories of my Game Gear that I just turned mine back on while writing this column to demonstrate my affection. I only wish I had these games for my sister’s Game Boy or my Game Gear before they were beloved artifacts living in my basement, because seven year old me would have spent hours playing them. Now? Eh. 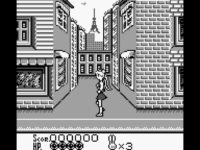 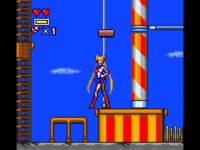 Released in Italy in 2011 for the Nintendo DS, La Luna Splende is an action platformer with puzzles. The game is set in the first season, although the actual game seems so far removed from anything vaguely resembling the series. Players choose a guardian as they travel through worlds which look Super Mario and Candy Land were accidentally cross pollinated in a lab explosion. The character models are poorly drawn and animated. The Game Gear title mentioned above has clearer character models than this game. This is a good example of a bad use of a license and I don’t recommend it to anyone. 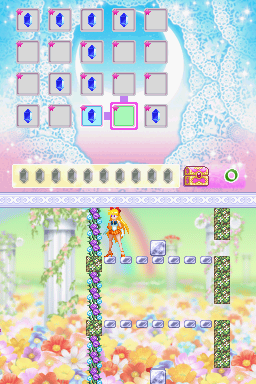 Nothing splendid about this.

Finally, we must pour one out for Sailor Moon Drops, the 2016-2019 iOS/Android titles. Arriving years after Candy Crush Saga mania waned, the game features a popular matching gems mechanic as players travel across game boards featuring dozens (hundreds?) of levels. As players progress, additional Sailor Guardians and allies are unlocked as playable characters, each with their own special combos and abilities which are subject to upgrades. Each story board mimics a series of the anime with story sequences and “battles” against enemy or boss characters, typically requiring certain conditions be met within a particular number of turns. 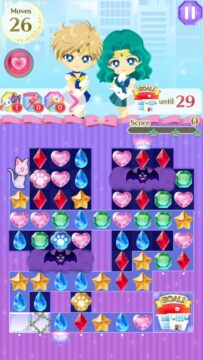 Was it a cynical, match-three money grab? Emphatically, yes; but the respect for and incorporation of elements of the series elevated it in a way that made it fun to play, especially when commuting or in short bursts. Do not ask me if I’ve signed the petition to bring it back.

You still with me? Thanks for reading this very specifically themed backlog report. There are more Sailor Moon games to explore. I promise to play some non-Sailor Moon games in June. This might be the nostalgia talking, but playing some of these games reminds me of the glory days of licensed video games – think Aladdin and Lion King for SNES. I wish we could get back to that, but at least I can always dedicate a future post to awesome licensed games from yesteryear. In the meantime, if you have any suggestions for anime video games (old and new) to try, let me know in the comments below or on Twitter!