While The Last Spell may be in early development, it is off to a promising start.

As part of PAX Online, developer CCCP and publisher The Arcade Crew released a pre-alpha demo of The Last Spell, a dark fantasy tactical RPG set in a world decimated by a monstrous miasma in the wake of the apocalypse. The Last Spell contains procedurally-generated elements and an electronic-metal soundtrack which is evocative of 1980s horror films. While the game is still clearly in development, this macabre roguelite is expected to descend upon PC in 2021.

The Last Spell takes place after the Cataclysm, an apocalyptic event which resulted in the world being engulfed in a purple mist replete with hordes of demons. The player controls a team of procedurally-generated heroes, tasked with protecting a squad of mages in the center of the field until they have completed their ritual. In the demo, the player has to survive through five nights of hellish hordes of monsters intent on breaking through the haven and decimating the magic circle. 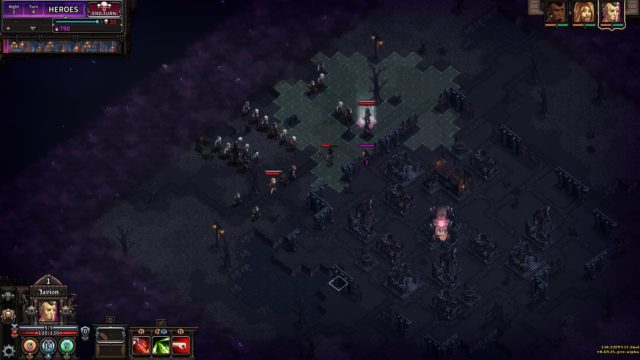 The player controls a team of heroes battling hordes of the undead.

Each game day is broken into three phases: Deploy, Battle, and Production. Starting in the Deploy phase, players can fortify defenses in the haven by expending materials to reinforce barriers, traps, and fountains while also deciding where to place the heroes. Players then launch the Battle phase, entering into turn-based tactical combat. In order to survive the night, they must battle through the wave of enemies by managing their movement points, action points, and magic points.

Once the wave of enemies has been defeated, the night ends and the haven begins the Production phase. During this phase, the player has a chance to build new structures as well as upgrade the heroes’ levels, perks, and skill trees. While inaccessible during the demo, other features for the full game will include an in-game store where players can trade collected souls for items.

While The Last Spell may be early in development, it is off to a promising start. The demo was challenging but fair, and small technical flourishes (a sizzling lightning spell or the sound of an axe slicing through undead flesh) enhanced my enjoyment of the demo. The playable character and enemy designs are varied with numerous weapon and ability types on display during the demo. Players looking to view a grim apocalypse through a pixel-art lens can expect to cast The Last Spell in 2021.