In this edition of the column the fate of the universe as we know it is under threat from the Old Gods Rising.

Up until recently, RPGamers would have been familiar with indie developer Hayden Duvall’s work through his contribution as an environmental artist on a number of well known BioWare RPGs. Eventually, he left the company and, in 2018, established his own development label, Bad Blood Studios. Old Gods Rising is the first game released by the one-man studio, and it comes across as an entertaining, competent exploration mystery that manages to fuse together Lovecraftian suspense with a good amount of tongue-in-cheek humor. However, interested players should know that it does ride the line when it comes to player agency, often limiting what actual gameplay is on offer.

In Old Gods Rising, players take on the role of Tom Winston, professor of ancient history and TV show host. Following a scandal about his latest book, he receives an offer to act as historical consultant on a schlock horror movie being filmed nearby titled Old Gods Rising. He accepts and heads to Ashgate University, closed for the summer and inaccessible to staff and students for the duration of filming. Arriving by bus in the main parking lot of the campus, Tom finds the place littered with production vehicles and crew trailers, but not a single soul in sight. Maz Kayfer, the movie’s eccentric director, contacts Tom via radio and instructs him to explore the campus and its surrounding area to examine several odd finds the film crew has unearthed. 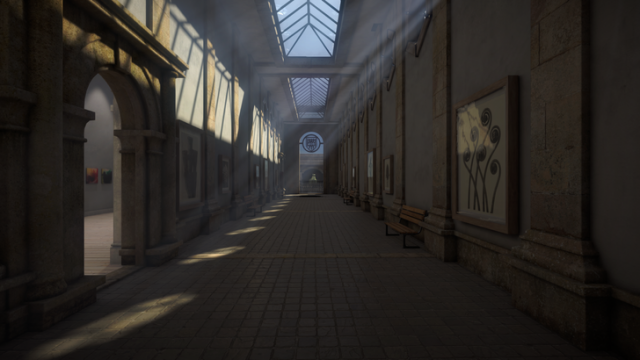 One of the rare times the player is actually allowed to explore the interior of Ashgate University.

In terms of gameplay, there’s generally little for players to actually do; Old Gods Rising is, for the vast majority of its runtime, what’s been dubbed as a walking simulator. The game, then, is a three-hour self-guided tour of the fictional Ashgate campus, and is more about what there is to find and see than what there is to actually do. To be fair, there are a few light puzzles consisting of a handful of locked doors or gates that require finding a nearby key or magnetic card. These are very simple and in one case the key is only about a dozen steps or so from the door where it is needed. One puzzle is a bit more robust, involving interacting with doors in a specific sequence to unlock access to a building. Even when coming across an interesting artifact, it’s Tom himself who takes over the reins as he uses his considerable historical expertise to analyze what’s in front of him while the player simply listens without any further action required.

The free-roaming first-person campus exploration in and of itself is a bit of a mixed bag. The sprawling school grounds initially seem like an intimidating challenge to navigate, with staircases and outdoor hallways running every which way. But with about 98% of its doors locked — almost all time is spent in the outdoor sections of the school — the environment design pretty much funnels the player down the critical path, with some electronically sealed gates preventing jumping ahead before the appropriate time. There are things to find along the way: references to video games and pop culture in general are represented by unique and occasionally clever sculptures in just about every open courtyard, and careful exploration reveals what appears to be burial sites that have been broken open and exhumed which also figure into the narrative later on.

The school’s massive and unending brownstone passageways do give way occasionally to areas that help the sense of discovery. A handful of buildings allow access to their interiors, such as an art gallery near the game’s end. There are also hidden alcoves with trailers and boxes full of movie props and set construction equipment left behind. Finding these starts to raise the game’s central question: is Tom actually on the trail of some sinister eldritch discovery, or is this seemingly abandoned campus just an elaborate set-up staged by a movie-making eccentric to capture footage for his exploitative found-footage horror movie? Suddenly the buzz of the security cameras following Tom’s every move doesn’t sound quite so benign anymore. 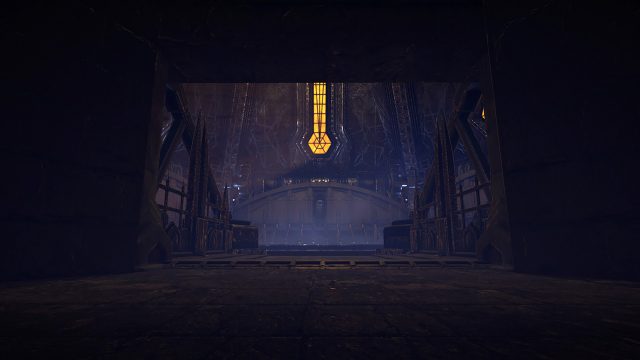 Despite all the evidence to the contrary, surely a space as epic and grandiose as this CAN’T be manufactured movie magic, can it?

It’s this dilemma that is at the heart of the game’s story. Finding a hidden work station with half-finished oversized prop tentacles or discovering that a large building was nothing but a Hollywood-style propped-up facade seem proof that this is all manufactured, but what about the ancient hidden temple stumbled upon, or the crew member who mysteriously disappeared, whose cries for help from a dark cavern are inexplicably cut off? And what’s with the fleeing footsteps occasionally heard just around the next corner? Could those eleven giant blinking red eyeballs that seem to appraise from behind a locked gate be nothing but movie magic? Tom will occasionally call his partner Lex — both excellently voiced — from phone booths scattered across campus to further discuss with her what’s real and what isn’t. The game delights in presenting these conflicting pieces of evidence, and lets the player stew in the uncertainty of the situation, even past the final scene, which honestly made me chuckle at its cheekiness, though some players will likely find its refusal to tie up all loose ends frustrating.

The game deftly weaves together this sense of uneasiness with bits of other humor and moody atmosphere. Just as with Lex, Tom can call a handful of other characters, none actually important to the narrative, after finding their numbers posted on bulletin boards across campus. There’s no real reason why he would respond to a notice about a lost cat or a robotics club, but these short conversations add a bit of welcome flavor to the overall experience. The same goes for the marketing banners hung all around the school grounds, featuring snarky student and staff “testimonials”. 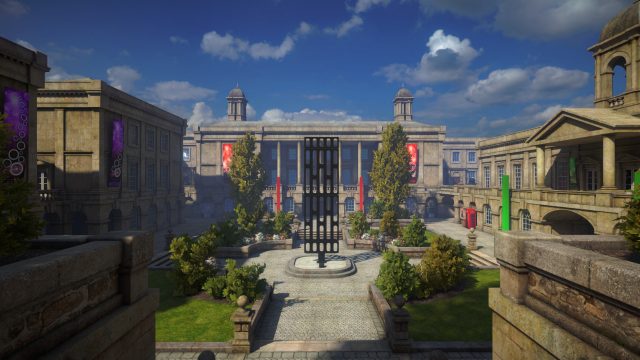 The campus of Ashgate University is sprawling and would be quite impractical for an actual student body to navigate.

A number of technical issues did present themselves during the playthrough. Playing on the highest graphical settings, there were a number of times when, walking through a doorway or rounding a corner, the environment failed to load in time. This resulted in Tom falling off the map and forcing a reboot once, and waiting for the game to catch up to continue walking every other time. Additionally, there was at least one spot where the architecture didn’t line up correctly, and the horizon was clearly visible through a tear in an otherwise solid stone wall. Thankfully, an auto-save system meant that, even when forced to reboot, not much progress was ever lost.

Your enjoyment of Old Gods Rising will depend on how much you value player agency. For those okay with being given very little to actually do, apart from one actual puzzle and a few token situations, and just being relegated to soaking up the atmosphere, this game will deliver a good time, even if it is only for a few hours. There are enough witty and interesting discoveries to carry a playthrough, and the combination of snark and Lovecraftian atmosphere works pretty well. Just be prepared for a story that expects you to handle some of the narration duties yourself.