Square Enix revealed today that due to the situation with COVID-19, it has elected to begin shipping copies of Final Fantasy VII Remake earlier than normal to Europe and Australia. The company confirmed that it will begin shipping copies of the game to the Americas this week and is hopeful that most players will receive the game by its April 10, 2020, release date. The full text of the statement is below, alongside the original image versions.

The Final Fantasy VII Remake team have worked extremely hard to make this game and we are incredibly proud of what you are about to play. Our biggest motivator during the development was that so many of you were willing us on, and we felt your enthusiasm and passion every step of the way.

We had some hard decisions to make during the final few weeks before launch due to disruption to distribution channels caused by the spread of the COVID-19 virus. These unique circumstances have made it very difficult to align timing of our global shipping. Our highest priority is that all of you, including those who live in countries currently facing the biggest disruption, can play the game at launch, so we made the decision to ship the game far earlier than usual to Europe and Australia.

As a result, there is a greater chance that some of you in these regions will now get a copy of the game prior to the worldwide release date of April 10. For other western regions, including the Americas, copies will be shipped this week and we feel optimistic that most of you will receive the game for launch day. However, due to the challenging situation we cannot provide delivery dates for each country and each retailer.

We really want all of you looking forward to Final Fantasy VII Remake to play the game on April 10 and experience everything we have been working on, together.

To everyone we would like to ask one big favour.

If you get the game early, please think of others and don’t spoil it for them. We know there are potential spoilers that have been out there for over two decades as the original Final Fantasy VII was released in 1997. But Final Fantasy VII Remake is a new game that still has many surprises for everyone. All our fans and players deserve to experience the game for themselves, and we ask for the support of our dedicated community around the world to ensure that.

On behalf of the entire development team, and everyone around the world that has worked on getting Final Fantasy VII Remake to you all, thanks again for your support, and most importantly, please stay safe. 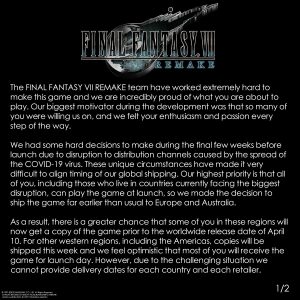 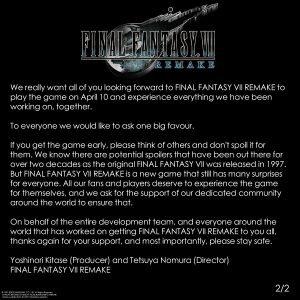