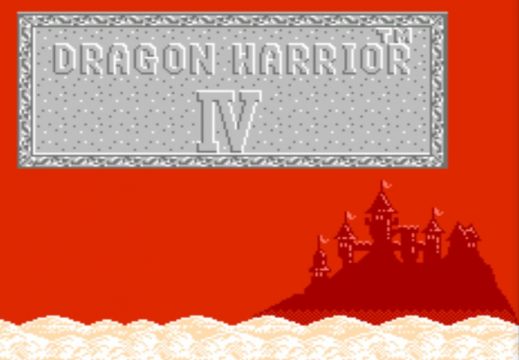 A glimpse of what lies in store…

The first RPG I ever played and completed was Dragon Warrior IV for the NES. It painted my early years in such a way that I typically credit it for teaching me to read. While I recall my father laying the groundwork of phonetics, it was Dragon Warrior IV that really pushed my literary limits.

I distinctly remember when we first rented the game from our friendly local video store. My parents already had a bit of a history with RPGs at the time, having previously played Final Fantasy IV and VI on the SNES and the original Dragon Warrior before I was even born. My mother, who played Dragon Warrior IV first among us, was stumped when the character she started with didn’t have the name she thought she had given him. She had to stop without saving at the time, and when she started over later, she named her character Raglin after forgetting Ragnar’s name. This was how Raglin became the first Dragon Quest hero I ever met.

I experienced the game first through Raglin’s journey. I used to watch my mom play RPGs with rapt attention as the story would unfold. Raglin, through the guidance of my mother and after many rentals, did manage to claim the Zenithian Sword and vanquish Necrosaro, whereupon it became my turn to forge my own path.

I was a child then and did not fully comprehend the strategic necessities of the genre, but the spirit of Raglin was there to guide me. My mother showed me so much of what there is to know and understand about RPGs, assisting me regularly through the game but never quite doing the work for me. Finally completing the game was a huge accomplishment that stuck with me to this day.

I was always closer to my mother than my father. As I grew older, we’d play many of the same games, watch TV shows together, and just connect on a level that I never really connected to my father on. In many ways she shaped much of who I am today. All things considered, I cannot overstate the influence she has had on my life. She was my Raglin, my hero. 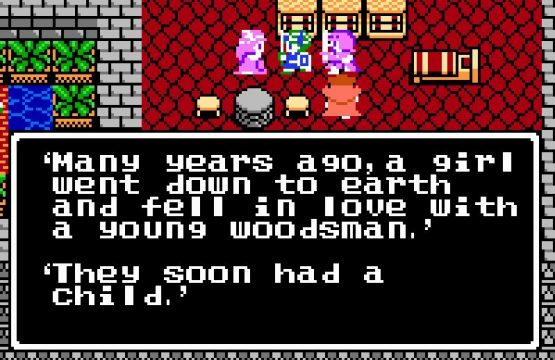 A hero meets his mother for the first time.

Up until only recently I could say beyond a shadow of a doubt that Dragon Warrior IV was my favorite game in the series. Nostalgia paints with a particularly vibrant brush after all, and I’m no less susceptible to it than anyone else. This is not to say that I’ve recently found it to be a substandard game. I played the Nintendo DS remake and still thoroughly enjoyed it. That would also be my first time experiencing the additional chapter I had previously read about, which had me very excited as it expanded on an already stellar early example of a sympathetic villain.

Though I may not have realized it when I was a child, I really appreciated Psaro, the villain of the game, as something beyond the children’s storybook character who wants to steal the cookies from Cookieland to make the children cry. His hatred and madness was driven by the loss of a loved one, and, while this may seem like a cliché, it was innovative for its time. I think we all have stories of loss and grief having significant impacts on our attitudes and outlooks.

This was a lesson I first learned years later when I lost my father to cancer. I couldn’t bring myself to cry, and this was a matter of much concern to me. At the time I was the only other person in my immediate family with a job. I had to drop the classes I was taking at the local community college and start taking more hours at work. There was life insurance of course, but it wouldn’t last long. I figured the lack of tears was a show of strength, to show that the rest of my family could rely on me.

Fittingly, it was my mother who bought me Dragon Quest XI for the Switch. It was a present for my most recent birthday after I had expressed some interest in the game due to the overwhelmingly positive reviews I was reading. I promptly began my gradual consumption of the game. Though I often complain about RPGs that advertise themselves by the large number of hours one might sink into them, I found that the time I spent on Dragon Quest XI zipped by unassumingly. Before long it had been over 140 hours and there was still so much I could do. Furthermore, not once did the game feel like a chore.

Although she had the game before I did, my mother still hasn’t completed it. She stopped about a third of the way through. Ever since she quit smoking, in fact, she rarely seemed to have the patience to complete RPGs like she used to. Whatever the case, I ended up completing the game before her, and I’d be lying if that didn’t give me a brand new sense of accomplishment. 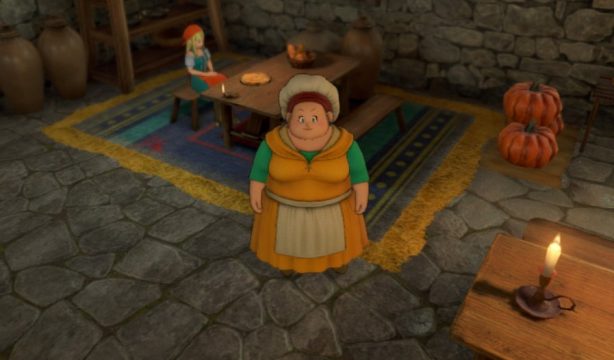 Dragon Quest XI is, in my opinion, a far superior game to its predecessors, and why shouldn’t it be? It’s had years of progress behind it. The battles are more engaging, the narrative pacing is more engrossing while leaving room to stop and quest around a bit whenever the desire arises, and the forging system is to die for. Needless to say, the game earned the time I put into it.

Through therapy it was my father’s abuse that I first allowed myself to recognize. His abuse was the most direct after all. He was a belligerent alcoholic who couldn’t quite come to terms with the fact that he never truly lived the life he wanted to live, instead hiding from it until he died miserable. I do not rejoice in my father’s death, but I now better understand the lack of tears.

It was a few years ago, after meeting the woman who would eventually become my wife, that my eyes were opened to my mother’s behavior. My then girlfriend wondered why I would experience near immediate anxiety whenever she sighed. It was a revelation to even myself when I told her that I walked on eggshells around my mother for fear that she would fly off the handle and threaten to kill herself. Each of her pitiful early morning sighs would cause my spine to compress, never knowing when she’d shout profanity or repeat her oft-spoken mantra, “Life sucks!”

The truth about my mother’s behavior and its implications began to unravel from then on. While her abuse was never as physical as my father’s, it was more potent in that she managed to continuously exploit my admiration for her in her desire to keep control over me. This is why it persisted for so much longer and why it became so much worse after I fell in love with someone. It eventually resulted in ten years of my life being essentially thrown away — a story for another time perhaps — something from which I’ve only recently recovered.

Though I’ve pleaded with her to seek psychological help, she always refuses. I once believed, since her behavior shifted drastically after she quit smoking, that it was the years of smoking that made her behave this way. I now believe, due to my own potentially inherited conditions, that this has always been a part of her and that smoking was simply an unwitting act of self-medication unfortunately keeping the darkness at bay. 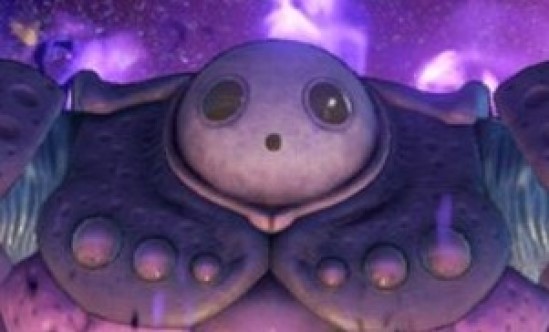 Sometimes the true villain is hiding in plain sight.

Today I keep my mother at a distance. I’ve never been able to talk to her clearly and directly about the abuse I believe her to have perpetuated against me. Maybe I never will. Regardless, letting go of Dragon Warrior IV is, in a way, tantamount to letting go of my mother. The loss of the mother and hero I once admired has made profound shifts in my attitude and outlook. I’ve held on against the darkness, however, and I’ve hoped never to become a Psaro.

Shumway, of course, is the name of my Dragon Quest XI hero. As is always the case in the Dragon Quest series and many RPGs in general, the silent protagonist is largely an avatar for the player. Shumway is me, standing on my own two feet against the tides of darkness, no longer needing Raglin to guide me.

To my great relief I have not yet become a Psaro, nor have I become a Raglin. I have, however, become a Shumway, and I hope for the strength to remain a Shumway for as long as I can.