Being knocked out while in a party feels less punishing in Dauntless due to the party revival mechanic, and yet difficult fights can feel more exciting due to the danger meter and the idea that one Slayer can pull out the win.

Dauntless, created by Phoenix Labs, brings another entry to the hunter sub-genre of games. This free-to-play action RPG released with a beta version on PC in 2018 before getting a full launch on PC, PlayStation 4, and Xbox One in May 2019. A Nintendo Switch version followed in December 2019, and as a fully cross-platform title, the game lets Slayers hunt these beasts alongside their friends playing on other platforms, though they do need to have an Epic login to do so.

Players start by creating their Slayer, those individuals tasked with taking down Behemoths. The options for choosing the look of the Slayer feel a bit limited compared to some other games, but most should find something that works well enough. From there, the game thrusts the new Slayer right into a tutorial fight, where they take on one of the easier creatures before being given free rein in the hub town.

Slayers choose from six different weapons. The axe features slow, powerful swipes that can stagger Behemoths. The chain blades emphasize speed and Slayers can use them to attack Behemoths from a moderate distance, or latch onto the creatures to got in close for a brutal assault. The aether strikers allow Slayers to essentially punch the Behemoths into submission, chaining combos together to save energy for a massive ranged attack. RPGamers will find enough selection and depth in the weapons to stay engaged for some time. And, as a live-service game, more weapons will likely be added in the future. 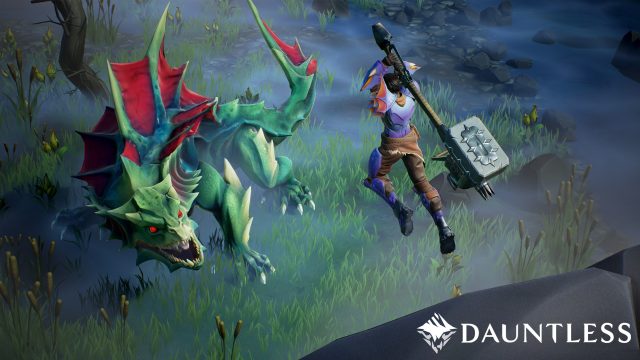 Fights are quite Epic.

Having spent about 25 hours with the game, I saw a fair number of the Behemoths Dauntless throws at the would-be Slayers. Gnashers, entry level opponents resembling a large beaver, move slowly, using their large tails to attack. The Embermane darts around the battlefield quickly, tackling those not fast enough to get out of the way and setting things ablaze. The Riftstalker is an umbral creature that uses teleportation portals to assault those who dare threaten it.

Slayers can tackle these beasts solo, with friends, or with random follow hunters. By keeping an active friends list, players can even join their friends who play the game on other platforms. Once the party is gathered, the game gives everyone one last opportunity to gear up for the fight and choose the best armor and weapons. Slayers work together to find the beast, lighting a flare once found to quickly inform others of the Behemoth’s location. Once initiated, combat moves fast and silky smooth. During the fight, if a team member goes down, another can help revive the fallen comrade. However, a meter indicating danger slowly fills up. Once the danger meter reaches capacity, revival by team members becomes disabled. The Slayers must drive off the beast, slay it, or face certain defeat.

This approach allows plenty of wiggle room if a party has a less experienced team member on board, and it allows for tense, exciting moments. In one of my sessions, the rest of my team went down with our danger meter at 100%. The creature did not have much life left, but I also had no back up to help me with the fight. Low on healing items, I dodged through the flurries of attacks from the Behemoth, getting in quick strikes where I spotted openings. The group cheered for me over the headset as I landed the final blow. Even though they ended the match in an unconscious state, all Slayers received full rewards. 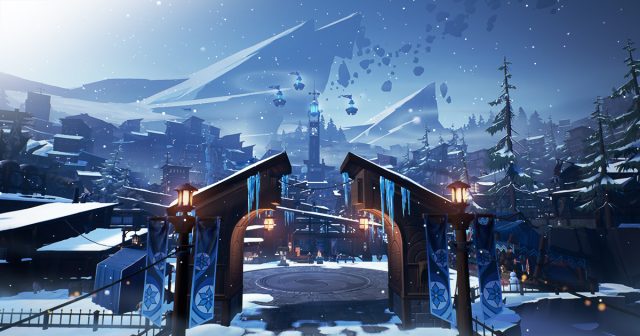 Get used to seeing this town.

With parts earned from defeating Behemoths, Slayers can go to various vendors to create weapons and armor. As the hunters work up to higher ranks, more and more monster parts are required to upgrade the Slayers’ equipment. Repetition becomes a concern at this junction. To help alleviate the tendium, Dauntless provides numerous ways to play. A hunter may simply pick a foe he wishes to hunt and queue for others to join him. Alternatively, he may sign up for a patrol, which throws him into a queue for a random Behemoth of a particular variety. The Escalation mode pits the adventurer and up to three peers against a battery of increasingly powerful beasts, with no restocking of consumables in between. This mode also features its own distinct progression system. Finally, the Trials have advanced hunters take down modified Behemoths, more dangerous than any found in other modes.

The art direction of the game really stands out right from the beginning. Dauntless features a cartoon look with sharp, strong lines and bright, vibrant colors, similar to World of Warcraft. This style permeates the game, including the Behemoths and lands they occupy. The background music fits the game well, and picks up as the danger escalates during a mission. Sound effects hold up their end, providing keen Slayers with audible information as the action unfolds.

I played Dauntless on the PC, PlayStation 4 Pro, and Nintendo Switch. While the game works well enough with each of these, I noted some concerns. In the PlayStation 4 version, frequent bugs plagued the experience. From the very beginning, my character became stuck on the tutorial mission, requiring a restart. Missions already take some time to load and get started, but random disconnects made such waits near excruciating at times. At the beginning of some missions, my character appeared frozen, with limited movement. In one instance — not wishing to exit all of the way out and wait for a new mission — I tried to fight in this bugged state, and this ultimately proved to not work out. 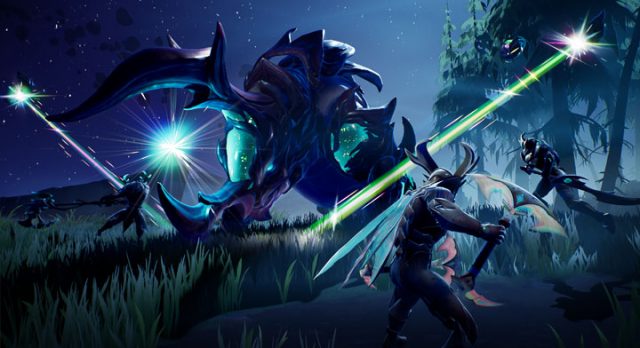 On the Nintendo Switch, frame rates lag in the hub town. Thankfully, once Slayers accept a mission and start a fight, the game runs smoothly enough. Resolution is naturally lower on the Nintendo Switch than other versions of the game, and one definitely notices it in handheld mode. With that said, hunters may feel that hit in graphical fidelity is a small price to pay for the portability afforded by the system. Using a mobile hotspot, I was able to enjoy full hunts nearly anywhere I wished during my time with the game.

Players support Dauntless through purchases made available through the in-game shop. They may purchase in-game currency used to buy cosmetic upgrades, a few quality-of-life improvements, or an upgrade to the Elite Season Hunt Pass. All hunters may accept quests that award hunt pass experience. Upon leveling up their Hunt Pass, players earn aesthetic improvements, consumable items, in-game currency, and more. The paid Elite version of the pass ensures players earn significantly more rewards from their XP. While a perk of the Elite pass gives a certain bonus to mission rewards as well, Phoenix Labs has balanced the game so that Dauntless does not become a ‘pay to win’ game. It should be noted that the premium currency is not cross-platform and that any currency bought or earned on one platform is not usable in the shop on another platform. However, any purchases made will be seen across all platforms. 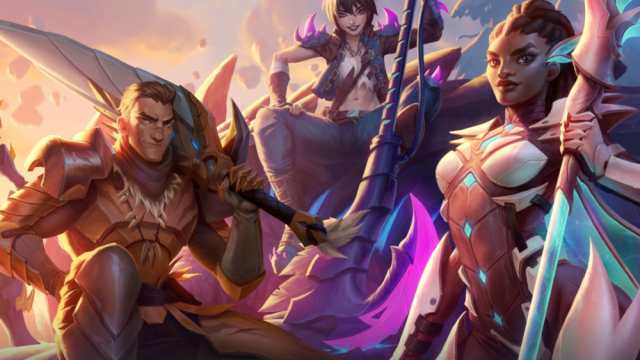 The game boasts a unique look.

It can seem impossible to discuss Dauntless without bringing up and comparing it to the game series that leads the sub-genre, Monster Hunter. Dauntless takes numerous steps to avoid such comparisons by making significant changes to the formula, including such details as the control scheme. Slayers who flip back and forth between this game and, say, Monster Hunter World: Iceborne may run into issues as nearly every action (such as light attack, heavy attack, dodge, etc) is mapped to different buttons on the controller, with no way to change them. Overall, combat feels faster, but simplified. The game focuses more on the fight with the monster, and a lot less on the hunt leading up to it. Fighting solo is possible in Dauntless, but feels significantly harder than in its counterpart, partly because Slayers do not have any AI sidekicks to assist with the fight. Being knocked out while in a party feels less punishing in Dauntless due to the party revival mechanic, and yet difficult fights can feel more exciting due to the danger meter and the idea that one Slayer can pull out the win.

Overall, fans of one series may not convert easily to the other due to these barriers and differences in style. However, for RPGamers new to the hunter sub-genre of RPGs, Dauntless can provide an excellent entry point, especially given its free-to-play model. Personally, I enjoyed my time with it, However, as a veteran player of the Monster Hunter series, I have to honestly say that Dauntless makes me appreciate the deeper mechanics and monster variety of Monster Hunter games that much more. With that said, I will continue to jump in from time to time to see what new challenges Phoenix Labs has for Slayers.