Capcom revealed its 2020 roadmap for Monster Hunter World: Iceborne. The upcoming updates will see the PC and console versions sync up in April 2020. The first update is coming to PC on February 6, 2020, and will include new monster Rajang, which was added to the console versions alongside a new volcanic region in October 2019. The second PC update will launch on March 12, 2020, and contains the Stygian Zinogre and frozen tundra zone that released on consoles in December 2019.

Meanwhile, console players will receive limited-time event quests throughout February and March 2020. These quests will increase the chances of players finding gold crown monsters, decorations, and Great Spiritvein Gems. A new update will be released for consoles in March 2020 and PC in April 2020 that includes two new variant monsters.

Updates after these will be released simultaneously on both PC and consoles. The first simultaneous update will come later in April, adding new Arch-Tempered and Master Rank versions of existing monsters, before a further update launches in May that adds in a new, unspecified monster from previous entries in the series.

Iceborne is an expansion to Monster Hunter: World that takes players to the frozen region of Hoarfrost Reach. In addition to the new area, Iceborne includes higher-difficulty Master Rank quests, new foes, and new abilities and tactical options. The expansion was released for PlayStation 4 and Xbox One on September 6, 2019, while its PC version launched on January 9, 2020. 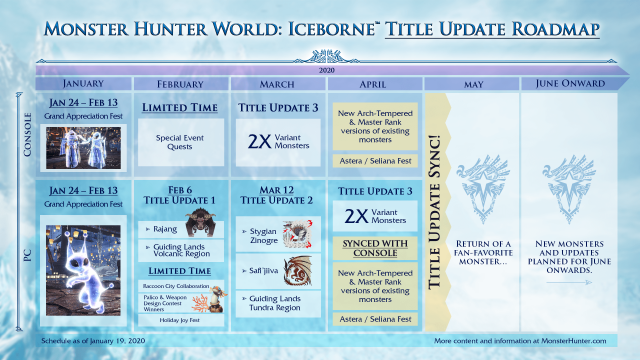