Bandai Namco revealed that the first DLC for action RPG Code Vein will launch in early 2020. Three pieces of DLC will be released and will include new bosses, weapons, and more — though no details have been given on exactly what each contains — and all three will be part of the game’s $24.99/£19.99/€24.99 Season Pass. The company also revealed that a free update is planned for release in December.

Code Vein is currently available for PC, PlayStation 4, and Xbox One. The game, from the same studio behind the God Eater series, is set in a world where a phenomenon called the Thorns of Judgment has laid waste to human civilisation. As a result of this phenomenon, surviving humans have gained supernatural abilities at the cost of severe bloodlust that can turn them into members of the mindless cannibalistic force wandering the world known as the Lost. Players control a customised Revenant and venture into interconnected dungeons surrounding the stronghold of Vein, teaming up with an AI partner or another player in online co-op. 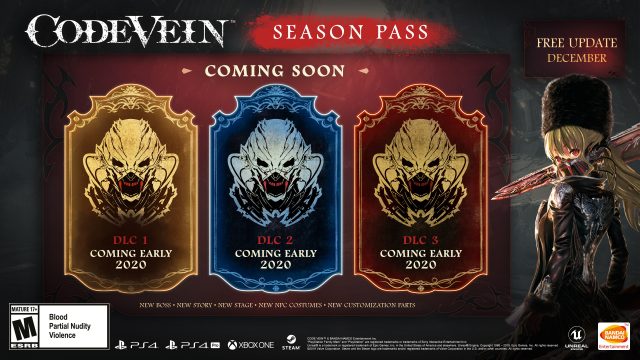