Garden Story is ripe with potential for fun — and fruit puns!

Garden Story tells the story of Concord, a plucky grape who fosters a decrepit town through some rough times. Whether he’s whackin’ a villainous slime or collecting resources to rebuild, folks know to call Concord if they’re in a jam. The demo played like a cute, fruit-themed Zelda with a focus on silly characters and crafting. From the spirited tunes to the understated danger of adorable produce fighting for their lives, Garden Story promises indie charm. Everything is created by a two-person team: Picogram is handling the art, writing, and systems, while Graham Nesbitt covers the sound.

The demo begins with Concord setting up camp in an abandoned library with his allies: a frog, a cherry, and an elderly berry. The surrounding town had been infested by the Rot, a malicious force that manifests as purple slime monsters. While the non-combatants get the library up and running, Concord and his frog pal explore. Along the way they meet Dillford (an elderly pickle) and Broccowilli (a broccoli with a trucker hat and a leafy hipster beard) while introducing the basics of exploration. 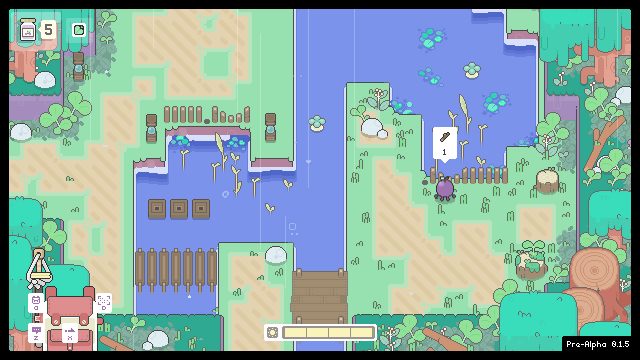 Using tools, attacking, and rolling depletes Concord’s action bar, which recovers over a few seconds. The gutsy grape can also make a charged attack to deal more damage. Oddly, the charged attack always executes in the direction Concord faces when the charge starts. For example, if I faced the top of the screen while starting the charge, Concord’s attack would propel him upward instead of whichever direction I was aiming at the time.

Gathering resources consists of whacking rocks, bushes, and other terrain features with a pick. The dowsing rod (or as I call it, “fishing pole”) drags distant resources and submerged loot into Concord’s grasp. It can also be used to slowly strike enemies behind barriers. Sometimes money shows up along with the craftables, which can be spent to upgrade Concord’s tools.

Crafting is a matter of tossing the resources down a chute in the library to unlock new books. It was unclear whether the books were being repaired with the resources I gathered or if it was more of a stick-based barter system. Either way, the books contained information about the world. Each book contained several resource thresholds, encouraging players to complete a volume to reveal all its secrets. 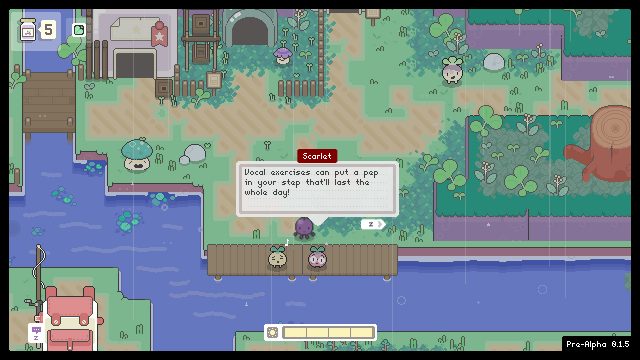 The first dungeon mostly consisted of simple block-pushing puzzles and showing off the dowsing rod. The boss complicated matters by showing up in the middle of a block-pushing puzzle. The only way to defeat it was avoid its attacks while returning the blocks to their earthy homes. Concord’s frog buddy joined the dungeon exploration, rushing ahead and causing a ruckus.

The demo ended after returning from the sewers, but it presents a compelling snapshot of what the finished game involves: explore, gather resources, fight, solve puzzles, and upgrade tools. Although promotional material for the game mentions building, gardening, and fostering new friendships, none of these elements were present in the demo. However, the bulletin board outside the library hinted at friendships that could be made. By completing requests from Concord’s potential friends, I could earn little rewards. Perhaps with time these rewards could be replaced with the truest coin of all: full friendship.

Garden Story is ripe with potential for fun — and fruit puns! The game will be released for PC and Mac on Steam in spring 2020, and is available to wishlist now. 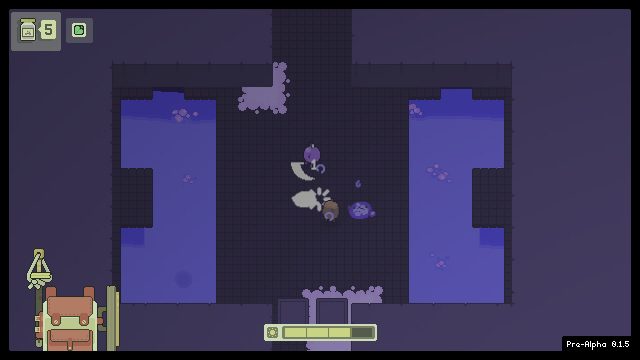