THQ Nordic has announced a pair of limited editions for upcoming action RPG Biomutant. The two editions are the Atomic Edition and the Collector’s Edition. The Atomic Edition is the more expensive of the two, priced at €399.99/$399.99/£349.99 and contains: 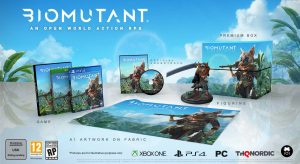 Biomutant is being developed by Experiment 101 and is an open-world RPG combining kung-fu and a post-apocalyptic setting. Players take control of an anthropomorphic animal that can be further customised with special mutations and enhancements. The game is currently planned for release later in 2019 for PC, PlayStation 4, and Xbox One.