Whatever is still in store for the final product, what’s available beginning on July 24 is already a polished, meaty dungeon-crawler for the slightly masochistic crowd.

At this year’s E3, Unfrozen’s roguelike Iratus: Lord of the Dead managed to absolutely capture my interest. That’s not an easy thing to do within the thirty-minute timeframe dedicated to most behind-closed-doors appointments at the show. I walked away with a desire to delve deeper into its barrage of combat mechanics, and I really couldn’t wait to savor its dark, heavy-metal-album-cover art style at my own pace. With the game entering Early Access on Steam this week, I was able to do just that, and the results, unsurprisingly, left me both excited and extremely humbled and intimidated.

It was easy to immediately see Iratus‘ visual similarities to Red Hook Studios’ Darkest Dungeon, even though this time the player is cast as the villain, whose army of undead creatures sports an arrestingly morbid visual design. The selection here goes far beyond run-of-the-mill zombies, although that particular troop type is represented. Of the sixteen unit types, six are immediately available, with the others unlocked via reaching certain milestones. Character models are a joy to drink in, with little touches that really make them special, like the Zombie’s stitched-together corpse being riddled with metal railway spikes and a machete, or the Skeleton being adorned with half-melted candles, proof that the skeletal remains, prior to being reanimated, were likely housed on some sacrificial altar or another. 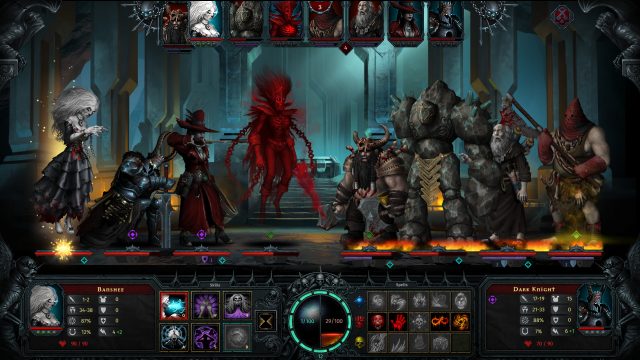 There’s a lot of eye candy during combat, but the wealth of information on the bottom is far more important to pay attention to.

What I didn’t know before, due to not being too familiar with Darkest Dungeon‘s gameplay at the time, was that the similarities between the two games go far beyond the visuals. In fact, the combat system’s core conceit is virtually the same, although Iratus does layer on quite a number of further tactical considerations. With actual dungeon-crawling occurring on a rudimentary overhead map where the player simply dials in the route and then watches a dotted line snake its way through the subterranean chambers, combat makes up the lion’s share of gameplay. Like its inspiration, battles see player and enemy parties of up to four combatants line up in a side-view, from left to right. Troop positioning is extremely important, as each unit has distinct abilities that can be activated depending on where in the line-up they’re placed, and can only target specific places in the enemy’s line-up. The Skeleton, for example, prefers to remain in the front line to make his sword strikes more potent, and has a useful dash attack to bring him back front-and-center should he be pushed into the back rows.

Although six unit types don’t sound like much, coming to grips with how to best use each character in various positions is a monumental task on its own, and will provide even those familiar with this type of combat mechanic plenty to chew on. Thankfully, helpful tool tips pop up when scrolling over virtually every ability, stat, character, and number on-screen, so slow and steady should be your mantra here. After some tinkering, I found myself gravitating toward placing the archer class, Bride of Iratus, into the back row and activating her Overwatch ability, which grants instant opportunity shots against any enemy who switches position. This ability paired well with the Wraith’s Terrorwave special ability, which, in addition to causing stress damage to the entire enemy squad, causes all foes to swap places with each other, providing lots of bonus damage courtesy of the Bride. Puzzling out clever combinations like this really make combat feel immediately gratifying.

But make no mistake: Iratus: Lord of the Dead is difficult. With the only means of healing injured troops being to have them sit out a few skirmishes, players need to quickly amass a sizable army of the walking dead. Iratus is a necromancer, and can use flesh, bone, and other parts awarded during battle to construct further troops. Being undead doesn’t protect your troops from falling in battle, and in-game death is permanent and leads to losing all the materials, gear, and time put into leveling that unit’s skills. The path you carve through the dungeon is a one-way trip, as you cannot double back to try out a different route, so choosing wisely is key; do you make a beeline for treasures and artifacts, missing out on opportunities to gain experience for your troops, or do you seek out danger, knowing that your troops could be lost forever in the process? Newly-crafted troops replacing perished veterans begin at level 1, which sounds like a poor proposition when progressing through the dungeon’s floors, the first three of which are available in its Early Access version. 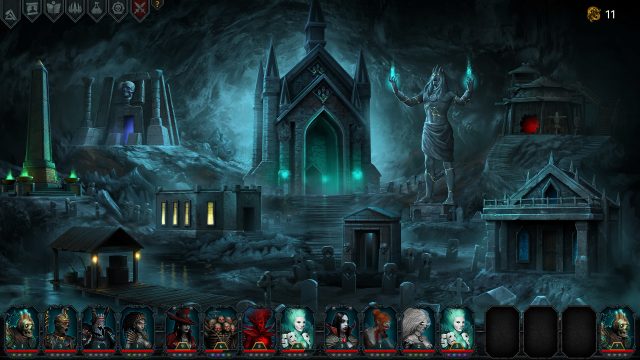 The Graveyard offers further ways to improve your odds by building structures and populating them with units.

Iratus knows the devil is in the details, and there are lots of additional aspects to become familiar with. Each unit has its own experience bar, and earning a level up grants a skill point to evolve any of the unit’s six skills in one of two distinct ways. Iratus himself gains experience, and has access to four talent trees, which offer passive boosts to troops, spells to use in combat, instant ways to damage opponents, and much more. In combat, there is a secondary stat, besides normal health, that can be attacked instead. Causing an enemy stress damage may cause status ailments such as insanity, send them fleeing from combat, or even give them a heart attack and die; accordingly, some classes, such as the beautiful but deadly Banshee, specialize in attacking the enemy’s stress levels rather than dealing outright physical damage.

There are many other subtleties that make Iratus a roguelike for the hardcore crowd. It’s a game that needs to be played to get a true sense of it, but players who enjoyed Darkest Dungeon will find this one a shoo-in for a strategic experience to test their skill against. Playing on the easiest difficulty level, it still took me around three hours just to clear the first dungeon floor, with a large majority of my troops wiped out by the end, leaving me to face an even harder dungeon with inexperienced, low-level grunts. And though I had enough materials to keep crafting and struggling, dying and restarting is also part of the experience, as unlocked minion classes remain available even in subsequent runs. Whatever is still in store for the final product, what will be available to the public on July 24 is already a polished, meaty dungeon-crawler for the slightly masochistic crowd.