Gust has released new details and images for its newest Atelier title, Atelier Ryza: The Queen of Eternal Darkness and the Secret Hideout. The new art and screenshots come with introductions to four new characters who join protagonist Reisalin Stout in the game: Lent Marslink, Tao Mongarten, Klaudia Valentz, and Rubert Valentz.

Lent and Tao are both childhood friends of Reisalin (Ryza). Lent has a poor reputation in the village due to his currently-unknown circumstances, but is friendly and good natured, often having to step in when Ryza does something unpredictable. Tao is shy but loyal to those he is friends with. He is intellectual and always carries around an ancient book that he is trying to decipher. 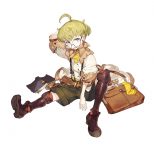 Menawhile, Klaudia is a new arrival to the village who Ryza befriends. She travels with her merchant father Rubert. Klaudia is generally mild-mannered but has a courageous streak, while Rubert is stern and sometimes overprotective of his daughter.

Atelier Ryza appears to be the start of a new subseries for the franchise following the recent Mysterious subseries and its subsequent return to the previous Arland setting in Atelier Lulua: The Scion of Arland. The game will be released in Japan for PlayStation 4 and Nintendo Switch in fall 2019. A PC version will also be released, but no release window has been provided.