Here are some adjectives that have described my mindset towards the Final Fantasy VII Remake over the course of its announcement and development, in chronological sequence: “excited” and “intrigued” at the initial announcement, “apprehensive” and later “indifferent” when it was revealed it would ditch the turn-based combat of its namesake and focus on action instead, and finally “nervous” as the implications of having such an important part of my formative gaming years potentially soiled irrevocably. Then, Square Enix’s 2019 E3 press conference with its combat trailer added “annoyed” and “dejected” to the mix, specifically due to the apparent influence of Final Fantasy XII and Final Fantasy XV, two games I don’t hold in incredibly high esteem, and a boss battle sequence that seemed needlessly lengthy for being the game’s first boss encounter.

Happily, getting some hands-on time with Square Enix’s key title this year assuaged quite a few of those fears and concerns, and leaves me adding some more positive words into the pot; terms like “optimistically suspicious” and “hesitantly hopeful” come to mind. However, even this newfound positivity doesn’t come without a caveat or two.

Full transparency: Final Fantasy VII Remake was one of only two games that, just for a moment, made me feel slightly choked up with emotion. Why? Firstly, because apparently I’m a sucker for nostalgia, and that opening shot of Aerith, the full-city reveal, and Cloud riding on the train (along with the familiar musical cues) just does it for me every time. However, to give it its fair credit, the game does look absolutely stunning, the character models beautifully detailed and lifelike, though I would have still preferred the music to be untouched in its original form — call me a purist. 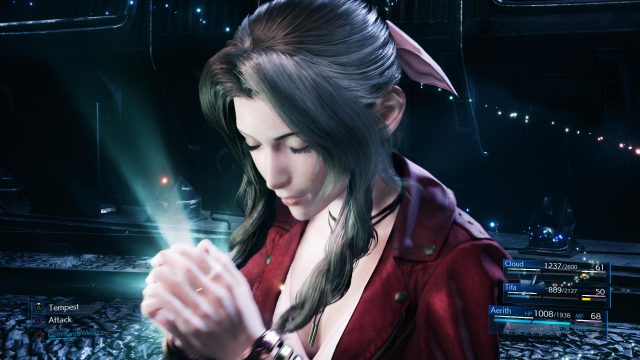 But you didn’t come here to listen to me tell you the cinematics look stunning; we could all see that for ourselves. This demo was all about how the new combat system feels, and this single-handedly could have the potential to make or break the overall game experience. To make a long story short, my fears have been laid to rest, for the most part anyway.

Executing basic combat attacks — what would have been the old “Fight” command — requires no waiting time at all, and slowly builds up ATB segments for each character. Once one of these is filled, time can be slowed to a crawl and the ATB segment spent in order to cast a spell, use an ability, or consume an item. In essence, this is about as close to the turn-based combat from the original game that we’re likely to get these days, and it works fairly well. It does make managing Cloud and Barret in the demo simultaneously fairly simple, and I can imagine adding a third will still feel pretty good. Unfortunately, it does mean that the player’s attention during the chaotic battle unfolding on-screen is quite heavily trained on the screen’s lower portion, closely monitoring gauge progress rather than taking in the gorgeous graphics.

This leads to the next unfortunate concession. With the PlayStation 4’s capable hardware and the focus on real-time action, combat is very busy. The Scorpion Sentinel takes full advantage of the Mako Reactor’s space, jumping from one end to the other and attaching to walls to launch missiles, put up shields, and fire its tail laser. Of course, all of these moving parts and explosions cause quite a lot of noise, and between it and the characters’ frequent verbal exchanges, the aural experience is about as busy and overwhelming as the visual one. Maybe with some time to acclimate your senses to the experience, or a vantage point a few feet further away than standing directly in front of the screen might make a positive difference. However, right now it feels like a more appreciable experience for anyone watching the game than for the players themselves. Playing the demo, all of the visual flair falls a bit by the wayside, and there’s a feeling that we may as well have just had the classic, turn-based experience anyway. 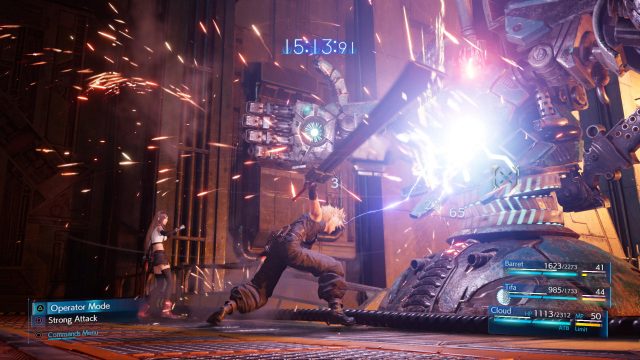 There was also an odd feeling to the controls, which of course I was only given twenty or so minutes to become accustomed to. Cloud and Barret’s vital info and ATB gauges are in the bottom right corner of the screen, while the active character’s command prompts appear in the bottom left. It looked like choosing commands would be hard-wired to use the directional pad, connecting the left side of the screen to the left half of the controller. Instead, hitting down on the D-pad switched which character was being actively controlled, so I ended up often switching back and forth between characters when, instead, I wanted to have Barret cast a Thunder spell to drive up the Scorpion Sentinel’s stagger gauge. However, it’s nothing more than a minor annoyance for now.

Overall, I walked away from the demo quite put at ease that, yes, Final Fantasy VII Remake‘s battle system is one I can deal with. Not just that, but it didn’t feel nearly as cumbersome or foreign as I was mentally preparing myself for. Instead, I actually felt a sense of accomplishment when I managed the timing of the various systems well enough to deal the finishing blow to the Scorpion Sentinel using Cloud’s Limit Break, and I’m certainly always interested in seeing where the expanded story of Midgar takes me. While I’ll probably never be fully in favor of ditching the classic approach, I’m back in a place where next year’s release of this game is something I can look forward to with some positive anticipation, which is something I haven’t been able to do in some time. I’d call that a success.