There was never much doubt that CD Projekt RED’s Cyberpunk 2077 was going to be one of the main attractions at this year’s E3. Just how breathtaking it would be was made even clearer during Microsoft’s E3 Briefing when Keanu Reeves just about tore the roof off. But the developer had far more than star power and good intentions to back up the hype; a nearly-hour-long uninterrupted gameplay demo, for starters, is nothing to sneeze at.

A completely darkened room with a giant screen and a sound system that shakes the walls is the perfect setting to experience a post-apocalyptic world like that of Cyberpunk 2077. Our demo allowed us to follow the storyline of one particular early-game quest from beginning to end, while learning more about the world, as well as some of the intricacies of the game’s systems, from the presenter. 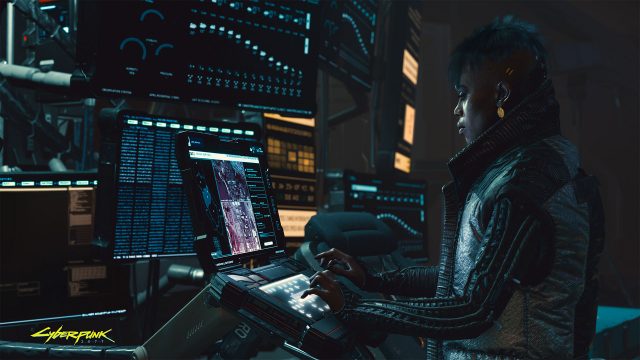 The demo sees V, the game’s protagonist, looking to recruit the city’s most skilled hackers, the Voodoo Boys, to help them get behind the truth of a mysterious biochip implanted in their head. After selecting a gender, assigning attribute points, and choosing which life path — Nomad, Street Kid, or Corporate — we wanted him to have, our V set off to Night City’s Pacifica district, one of the six distinct zones within the metropolis, where the Haitian gang holds sway. After gathering some intel at what appeared to be a gathering of devotees, V finally tracked down and gained an audience with the gang’s apparent leader, who promptly put him on a quest to prove his trustworthiness.

The task presented was for V to travel to Pacifica’s Grand Imperial Mall and clear it of Animals, an unsavory gang of juiced-up, unnaturally hulking people who have been encroaching into the Haitians’ territory and could likely pull V apart limb from limb with zero effort. The infiltration of the Grand Imperial Mall, as well as how V deals with its freakish inhabitants, is completely open to the player, and we watched various builds of V tackle the problems in their own unique ways. For example, it is possible, we were told, to play through the entirety of Cyberpunk 2077 in a no-kill run, or one could, of course, simply go in with guns blazing.

Whether choosing a lethal or pacifist approach, options still abound. Due to the citizenry of Night City’s rampant body modification, most people — V included — have implants that let them jack into any surrounding network. And since virtually everything in this dystopian future is connected to the net, an unfortunate “accident” could easily befall an Animal attempting to beat his own bench press record, or one who is standing foolishly close to a malfunctioning electronic billboard that could easily go haywire. The fun and variety of how to deal with situations in Cyberpunk seems limited by nothing as much as the player’s imagination. 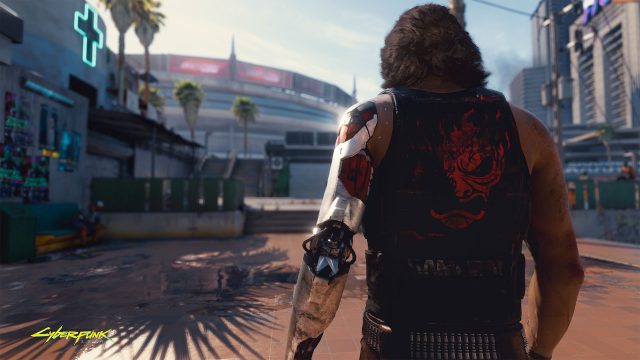 Before all is said and done, we’ve dealt with a boss battle and met both a digital ghost named Johnny Silverhand as played by Keanu Reeves and a government agent from government agency Netwatch, who tries to warn V of a potential double cross by the Haitians. How all of these events play out is up to the player, and since V still needed the gang’s hacking abilities to deal with the biochip, we put our trust in the gang and dispatched the agent, likely making us no friends in that faction for the remainder of the game.

Leaving the Grand Imperial Mall, Night City stretches out in front of us, vast and beautiful in its bleak ugliness. We’re reminded that, should we so choose, V could simply climb on his motorcycle, put on the game’s amazing, heavy soundtrack, and ride the city from one end to the other without a single loading screen to break up the experience. But, as it turns out, there is so much more still hidden behind the city’s brick-and-mortar façades; after returning to the Haitian hideout, it’s time to begin dealing with this pesky biochip. As it turns out, this requires V to literally put his body on ice and let his mind enter Cyberspace, a whole other, unknown quantity from what we’ve seen so far. As V’s vision blurs and a digitized world comes into existence around him, the demo ends to leave us wanting more. Looks like we’ll be waiting ’til April of next year to find the rest out for ourselves.