In this edition of the column we take a look at mystery visual novel World End Syndrome from TOYBOX and Arc Systems Works, which is now available for PlayStation 4 and Nintendo Switch.

TOYBOX and Arc System Works have worked together before on Tokyo Twilight Ghost Hunters, an interesting hybrid of strategy RPG and visual novel that some RPGamers may be familiar with. The two companies join forces once again for a more traditional visual novel in World End Syndrome. Like the previous collaboration, and even though the visual novel genre has a little less room for originality, World End Syndrome provides lots of neat ideas, wrapped up in a mystery focusing heavily on the themes of life and death.

World End Syndrome follows a high school student moving to the rural town of Mihate. The town has a legend that every one hundred years some members of the dead rise as Yomibito, retaining their memories but not being aware of their prior death, before going crazy and attacking the townsfolk. However, the legend is treated as just that and, though there are lingering traditions in the town such as the continued use and displaying of pinwheels associated with the legend, the main attraction of the town at present is the filming of a movie based on a local teacher’s wildly successful novel, Worldend. 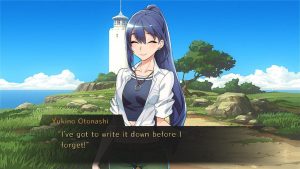 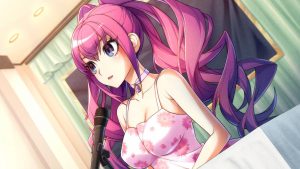 After meeting up with the aspiring writer Yukino on the journey to Mihate, our protagonist finds himself at the family mansion he will be living in. However, it is not as empty as he supposed, with his same-aged distant cousin Maimi quickly establishing her rules for the house. Following this, he meets up with the traditionally-excitable side character Kensuke and his teacher, Kaori Yamashiro, the aforementioned author of Worldend. Kaori recruits the protagonist into her new club, which looks to research the town and its mysteries. The club eventually includes Maimi; Yukino; Saya Kamishiro, daughter of the most prominent family in town; Miu Amana, who works at a local café owned by her brother; and Hanako Yamada, who bears a large resemblance to Rei Nikaido, the idol playing Worldend’s movie lead.

Before players can start getting into the individual routes of World End Syndrome, they first are required to get the worst ending. In practice, however, this process acts primarily as the game’s prologue, taking around four hours to get through before a one-option choice comes up that skips the entire month that all the remaining routes take place in. Once this is done, players can then start a new game right from the point of that choice, where a second option comes up. Selecting this option unlocks the rest of the game. When players are ready to tackle individual routes, the game borrows the scheduling aspect of simulation titles, where players choose from one of seven places to go each morning, afternoon, and evening, barring some days reserved for special events.

Most of these selections will see the character(s) in that location making some brief comments with a quick signal that their relationship with the protagonist has increased slightly, though some will offer much more detailed or route-specific events. Unless players choose to follow a guide, there will be some unnecessary trial-and-error to start with as the game won’t actually show who is at which location until after that location has been visited and a new game is started or save file is reloaded. There is also clearly a preferred order to undertaking the routes, as some will not be available until either previous ones are completed or some other nebulous requirements are met. The game at least makes it clear what route players are on and if a new route has just been made available, it will strongly guide players down it at the start of the new game. 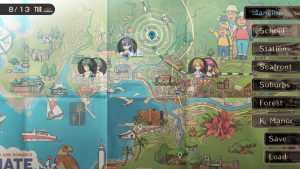 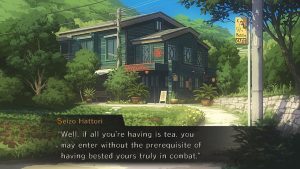 The first couple of routes rather divert the game’s attention from the overriding mystery that is introduced in its prologue, instead preferring to focus on some quick romances and the individual stories of those particular characters. However, the later routes do a fine job of bringing the overall story and theme of life and death back into focus. This partly comes from the structure of the game, as the protagonist’s knowledge is a building combination of things the player is aware of, so anything he learns from a previous route, or even save file, is carried over. This somewhat illogical feature is given a bit more credence as at least many major character events remain consistent, regardless of whether the player is present in that route. Though it does mean that the protagonist feels like more of a supportive bystander than actively involved in everything, the way the mysteries and reveals of all of the routes stack up to the conclusions in the final character route and true overall ending is highly satisfactory.

The visuals in World End Syndrome are worth noting. The character and background designs are all very pleasant to look at, but where World End Syndrome stands out moreso than other visual novels is the animations on those backgrounds. Things like rolling ocean waves and pinwheels turning make it a more engaging visual experience and help bring a surprising amount of life to the town with what are a relatively small touches. Voice acting is Japanese-only, but the performances are strong.

World End Syndrome doesn’t quite make it into my personal pantheon of visual novels, but it isn’t very far off. Its first couple of routes loosen the grasp that the prologue makes, but retain a firm enough hold that gets stronger as the mysteries come back to the fore. With a very satisfying final conclusion that makes impressive use of the previous reveals and clues, and a vibrant visual style, World End Syndrome is a very worthwhile pickup for those with passing interests in visual novels and mystery stories.