There Be Beautiful Monsters Here

Monster Boy — or Wonder Boy, as Sega’s classic series is actually called — was probably the last thing anybody expected a sequel to, a cool twenty-four years after the previous title appeared on the Genesis. Of course, re-releases on the Virtual Console and two recent remakes of the earlier titles have done their part to ensure that the franchise hasn’t entirely vanished from the public eye. With newcomer Game Atelier at the helm, Monster Boy and the Cursed Kingdom proves to be a fantastic reinvigoration of the franchise; full of varied gameplay, challenging bosses, and a masterful presentation, it’s a game absolutely bursting with charm that’s almost impossible to put down.

Cursed Kingdom embraces the same Metroidvania gameplay that has appeared in some previous installments, but with a twist. Rather than starting the game as a powered-down version of the protagonist, then continuously adding new abilities and upgrades to the hero’s repertoire that grant access to new areas of the world map, Monster Boy sees players unlock new animal transformations as the game progresses. The first area, however, is played while still in human form; the first animal form transformation isn’t gained until after the first boss has been defeated.

The animal transformations in Monster Boy are all part of the titular curse that is afflicting the entire kingdom. Jin, the hero, is on the trail of his mad uncle Nabu, who has turned all other humans in the realm into animals, and the peaceful creatures living in the oceans and forests into hostile enemies. After defeating the first area’s boss, Uncle Nabu transforms Jin into a pig, and from this moment, the player is cursed to remain in animal form; human form is impossible to return to until Uncle Nabu’s curse has been broken, and other animal transformations don’t become available until later. Whereas the transformations can eventually be viewed as new abilities gained, this first one is more of an obstacle that restricts Jin’s own actions and must be dealt with. 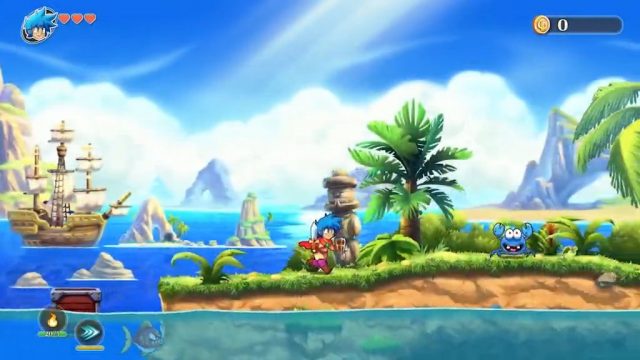 Brilliant color saturation to the max!

Certain bosses will grant Jin the ability to transform into their respective animal form after they’ve been defeated in battle. Rather than build on each other, each form has distinct characteristics — including advantages and drawbacks — that can be utilized to let Jin explore new areas, solve certain puzzles, or take on enemies in new ways. As a human, Jin is able to wield a weapon, wear armor, and even use magic; in comparison, becoming a pig makes him too fat to wear armor or carry weapons, and his ability to jump is severely reduced. However, magic is still available, and pig form gives Jin the ability to sniff out hidden secrets, concealed doors, and unearth magic truffles that grant access to new types of offensive magic. Each form’s usefulness complements that of the others, and even later areas and encounters make clever use of early-game transformations, so they don’t become redundant.

It’s the moment-to-moment Metroidvania gameplay, though, that’s going to keep players’ thumbs glued to their controllers. Although there are some platforming challenges, the game is much more focused on discovery, particularly once multiple transformations are unlocked, and kinetic puzzles that are ingeniously woven into the gameplay itself. There is a ton of variety in the gameplay as well, as the game can switch from platforming to town exploration, from dungeon runs to puzzle rooms, and even to side-scrolling shooter in the blink of an eye (though thankfully not many of the latter, as the player’s hitbox in this mode is one of the only elements in the game leaving something to be desired).

No matter the style of gameplay, one thing is for certain: controls in Monster Boy and the Cursed Kingdom are as tight and responsive as one could hope for. With a full complement of transformations unlocked, the action takes place on land, utilizing sword-based combat, double jumps, or the lion’s speed rush that lets him run across water for a limited time; in underwater sections taking advantage of the frog form’s superior maneuverability and unlimited lung capacity; and even in the air, flying across the sky in dragon form or using the frog form’s tongue as a type of grappling device. Dungeons themselves are a joy to experience, with classics like the ancient ruins of the Lost Temples or a lava-filled volcano, pepped up by more unique, puzzle-centric dungeons like the Haunted Manor and a sunken ship on Pirate Shore. Dungeons, particularly in the game’s latter half, are also quite massive, requiring quite a bit of time to fully crack, and topped off with challenging, well-designed boss fights that take advantage of Jin’s transformation abilities, and even a fourth-wall break or two. 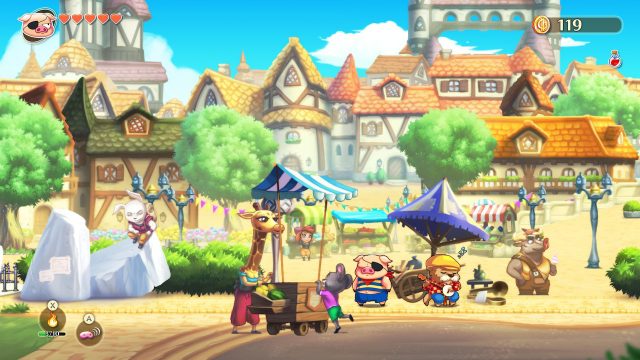 Something as simple as a stroll through the village marketplace is proof positive of what current-gen graphics were really meant for.

As if the responsive controls and enjoyable gameplay weren’t enough to clinch the deal, Monster Boy also features absolutely sublime visuals throughout its entire twenty-hour campaign. At any given moment, there’s just so much to take in, from the hand-drawn, very expressive character sprites to the colorful world, brimming with loving detail crammed into every fore- and background, some of which players will even be able to alternate between. There’s the pristine oceanside Skullrock Beach with its pirate ships and skull-shaped island caves, and a player’s first visit to the village of Lupia, with its stained-glass cathedral and bustling marketplace filled with fellow curse-suffering animal citizens, are just two early highlights. Each of the animal forms Jin can transform into come with a full complement of unique animations for running, jumping, climbing, falling, swimming, and more. Using abilities in incompatible circumstances, like attempting to sniff when submerged in water, has its own animation as well. On top of all that, unique idle animations for each form, as well as all weapons and gear represented cosmetically onto each form that can equip them, have all been included. There simply isn’t a moment of less than jaw-dropping visuals, and Monster Boy and the Cursed Kingdom may well be one of the most beautifully animated games out there.

With such high praise for every other facet of the game, the musical score has a lot to live up to, and, unfortunately, it is just a little bit less impressive than the gameplay and graphics, though that’s still saying quite a lot. There are generally some quite catchy and upbeat musical tracks to listen to during exploration, and even some that will keep players whistling and humming along when not playing anymore. Of course, for a twenty-hour game duration (more if players want to suss out absolutely every last secret and treasure the world has to offer and go for 100% map completion), a handful of tracks do clock in as mediocre, which still puts them above what can be heard in other games. There’s absolutely nothing negative to report on the audio front, apart from an absence of spoken dialog for those looking for it, but some areas work just fine with the volume turned down a bit.

Monster Boy and the Cursed Kingdom isn’t the first time in recent years that the thirty-year-old franchise has reappeared to modern gamers. But with its developers’ fanatic devotion to polishing every facet of the game to perfection, the series seems potentially well-poised for more of a comeback. It goes beyond the twitch gameplay required for hardcore platformers and presents so many enjoyable gameplay ideas that most players will find something about the game, perhaps even everything, to love. Being available on just about every home console platform means players will have no excuse not to try it out — stop reading and go play Monster Boy immediately!